The Avro Lancaster is a British Second World War heavy bomber. It was designed and manufactured by Avro as a contemporary of the Handley Page Halifax, both bombers having been developed to the same specification, as well as the Short Stirling, all three aircraft being four-engined heavy bombers adopted by the Royal Air Force (RAF) during the same wartime era. 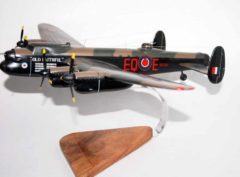