The Akula class, also known by its Soviet designation of Project 971 Shchuka-B and its NATO reporting name of Akula, is a series of fourth-generation nuclear-powered attack submarines (SSNs) that were first deployed by the Soviet Navy in 1986. There are four sub-classes or flights of Shchuka-B, including the original seven Project 971 boats (Akula I), six Project 971Is (Improved Akulas), one Project 971U (Akula II), and one Project 971M (Akula III). These submarines were commissioned between 1984 and 2009, with the exception of the Project 971U, which was commissioned in 1995, and the Project 971M, which was commissioned in 2001. The Russians refer to all of these submarines as Shchuka-B, regardless of the specific modifications they have undergone. It’s worth noting that the name Akula (meaning “shark” in Russian) was also used by the Soviets for a different class of 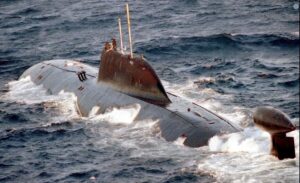 submarine, the Project 941, which is known in the West as the Typhoon class. The Project 971 was designated as Shchuka-B by the Soviets but given the name Akula by the West after the lead ship, K-284. The launch of the first Akula class submarine in 1985 reportedly surprised Western intelligence agencies, who had not expected the Soviet Union to produce such a vessel for another decade.

Model made from Mahogany/ 20 inches 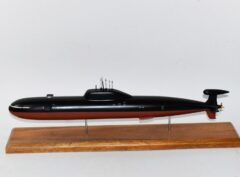