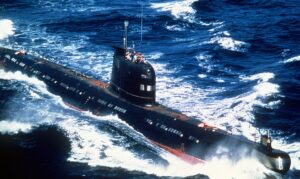 The Foxtrot class of submarine, also known by its NATO reporting name, was a type of diesel-electric patrol submarine developed by the Soviet Union. The Soviet designation for this class was Project 641. The Foxtrot class was designed to be an improvement on the earlier Zulu class, which had structural weaknesses and vibration issues that limited its capabilities. The first Foxtrot submarine was commissioned in 1958, and the last was completed in 1983. A total of 58 were built for the Soviet Navy at the Admiralty Shipyard in Saint Petersburg, with additional hulls being built for other countries.

The Foxtrot class was similar in performance and armament to many other submarine designs of the time, but it was noisier due to its three screws. It also 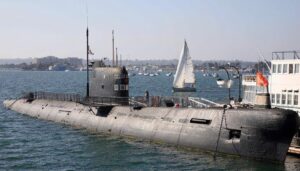 lacked the teardrop hull design, which offered better underwater performance, and had a slow average speed of 2 knots due to the weight of its batteries. The Foxtrot class was outdated by the time the final submarine was launched and was retired by the Russian Navy between 1995 and 2000. Some units were scrapped, while others were preserved for museum purposes. In 1997, one Foxtrot class submarine was transferred to Ukraine, but it was not operational and was eventually returned to Russia during the annexation of Crimea in 2014. Its current status is unknown. 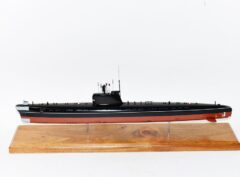