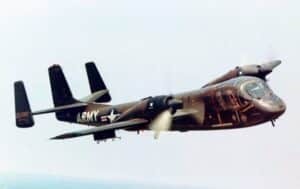 Designed for battlefield surveillance and light strike capabilities, the Grumman OV-1 Mohawk was a twin-turboprop aircraft with side-by-side seating for two crew members. Its purpose was to provide support for United States Army maneuver forces from short, unpaved runways. The Mohawk was an armed military observation and attack aircraft.

The Grumman OV-1 Mohawk was an armed military observation and attack aircraft that was used by the United States Army during the Vietnam War. The aircraft was intended to operate from short, unimproved runways and was equipped with XM14 .50 caliber gun pods as well as two M159 unguided rocket pods. It was flown operationally in Vietnam, where sixty-five were lost to accidents, ground fire, and one was shot down by a North Vietnamese fighter. In early 1968, U.S. Army Captain Ken Lee became the only Army Aviator to ever down a MiG-17 fighter jet while flying an OV-1 over South Vietnam. The Army also used the aircraft during Operation Desert Storm. The Army National Guard began to receive the Mohawk in 1972, eventually operating thirteen OV-1Bs, twenty-four OV-1Cs, and sixteen OV-1Ds. U.S. Army OV-1s were retired in the early 90s, being replaced by newer systems and aircraft. As of 2011, a partnership was formed to return an armed, modernized version of the OV-1D to operational use as a counter-insurgency aircraft.

No products were found matching your selection.