The Hawker Siddeley HS-121 Trident is a British airliner that was produced by Hawker Siddeley. Originally designed as the de Havilland DH.121 and briefly known as the Airco DH.121, the Trident was developed in response to a request from British European Airways (BEA) in 1957. After de Havilland was acquired by Hawker Siddeley in 1960, the Trident made its maiden flight in January 1962 and was officially introduced in April 1964, competing with the Boeing 727. A total of 117 Tridents were produced before the end of the program in 1978. The Trident was retired from service in 1995.

Powered by three rear-mounted Rolls-Royce Spey low-bypass turbofans, the Trident has a low-swept wing and a T-tail. It was equipped with advanced avionics, including the ability to make a blind landing in revenue service, a first for an airliner. The initial Trident 1/2 model could seat 101-115 passengers over a range of up to 2,350 nautical miles (4,350 km). The Trident 3, which was stretched by 5 meters (16 feet) to accommodate 180 passengers over a range of 1,940 nautical miles (3,590 km; 2,230 mi), featured an additional RB.162 booster engine in the tail. 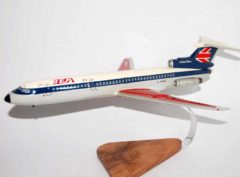