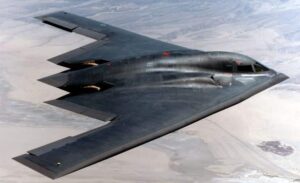 Fly this heirloom B-2 Spirit model from a mantel or desk to capture this awesome bomber. Each piece is carved from wood, individually made, and handpainted to provide a piece you’ll love. 18 inches

The Northrop (later Northrop Grumman) B-2 Spirit is an American heavy penetration strategic bomber, featuring low observable stealth technology designed for penetrating dense anti-aircraft defenses.The B-2 is capable of all-altitude attack missions up to 50,000 feet (15,000 m), with a range of more than 6,000 nautical miles (6,900 mi; 11,000 km) on internal fuel and over 10,000 nautical miles (12,000 mi; 19,000 km) with one midair refueling. It entered service in 1997 as the second aircraft designed to have advanced stealth technology after the Lockheed F-117 Nighthawk attack aircraft. Though designed originally as primarily a nuclear bomber, the B-2 was first used in combat dropping conventional, non-nuclear ordnance in the Kosovo War in 1999. It later served in Iraq, Afghanistan, and Libya 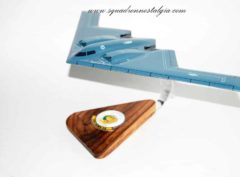 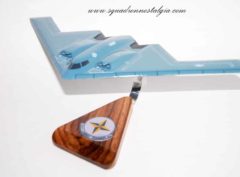