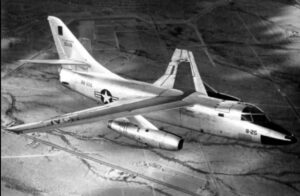 The Douglas B-66 Destroyer was a light bomber produced by the Douglas Aircraft Company for the United States Air Force (USAF). It was based on the United States Navy’s A-3 Skywarrior, a heavy carrier-based attack aircraft, but incorporated many original features due to the USAF’s extensive and divergent requirements. The B-66 featured a three-man crew and was equipped with ejection seats. It made its maiden flight on June 28, 1954 and was introduced to the USAF in 1956. The standard B-66 model was intended to replace the Douglas A-26 Invader, and a dedicated photo-reconnaissance model, the RB-66, was also developed. Later variants of the B-66 were used for signals intelligence, electronic countermeasures, and weather reconnaissance. These aircraft were often deployed to bases in Europe and were active during the Cuban Missile Crisis and the Vietnam War, where they supported other assets and conducted mapping missions. The last B-66s were retired in 1975. 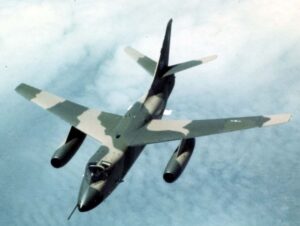 attention of senior officers in the United States Air Force (USAF), who were skeptical about its claimed specifications and capabilities, particularly its take-off weight of 68,000lb. General Hoyt Vandenberg mocked the proposed A-3 as “making irresponsible claims.” It has been suggested that this skepticism was related to the USAF’s opposition to the Navy’s proposed “supercarriers,” which were intended to carry the A-3 and other aircraft. However, while the supercarrier project was eventually abandoned, flight testing of the A-3 proved its performance. It was discovered that the A-3 was capable of carrying out mission profiles similar to those of the larger Boeing B-47 Stratojet operated by the USAF, including an unrefueled combat radius of almost 1,000 miles. This, combined with the fact that the Navy had already paid for its development and the pressing needs highlighted by the Korean War, made the A-3 appealing to the USAF. As a result, the USAF began to express interest in procuring a land-based version of the A-3 in the early 1950s.

Made from Mahogany; 18 inch Model 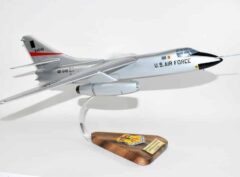