The Grumman F9F/F-9 Cougar was an aircraft carrier-based fighter aircraft for the United States Navy and United States Marine Corps. Based on Grumman’s earlier F9F Panther, the Cougar replaced the Panther’s straight wing with a more modern swept wing

The McDonnell Company of St. Louis built the
Navy’s first all jet aircraft and demonstrated that the jet
engine was adaptable to naval aviation, but it was
Grumman’s F9F Panther that became the first Navy jet
fighter to shoot down another jet fighter.
Grumman’s departure from propeller driven fighters
was accompanied by abandoning the tradition of naming
the Company’s fighters “Cats.” However, the feline
connection lived on with Panther and Cougar and
eventually returned to original policy with the F-14
Tomcat.
Grumman received a Navy contract on 16 December
1946 to produce a jet powered, straight wing, carried
based fighter. The aircraft Grumman proposed first
flew on 21 November 1947 and was eventually designated
and named the F9F-2 Panther. It was first delivered
to Navy squadron in May 1949 and remained in
service until October 1958. The Navy accepted a total
of 1,388 Panthers with designations of F9F-2, F9F-3,
F9F-4 and F9F-5.
The Panther’s success led Grumman to design a
swept wing derivative and propose it to the Navy.
The new design retained the fuselage of the Panther
but included a swept wing and tail. The Navy
awarded Grumman a contract for this new aircraft
on 2 March 1951. It made its first flight on 20
September and was named the Cougar but retained
the F9F designation. The Cougar was first delivered
to the Navy in November 1952 and remained in
squadron until February 1960. The Navy accepted a
total of 1,985 Cougars with the designations F9F-6,
F9F-7 and F9F-8. 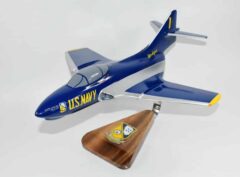 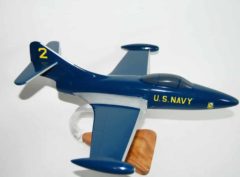 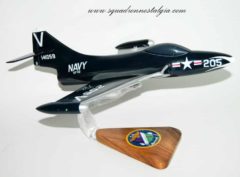 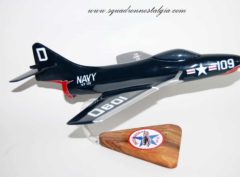 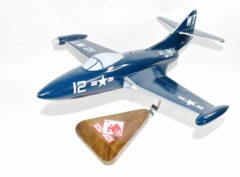