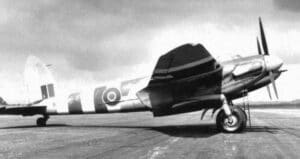 The de Havilland DH.98 Mosquito was a British multirole combat aircraft that was introduced during World War II. It was known for its unique wooden frame and earned the nickname “Wooden Wonder” or “Mossie.” Despite initial skepticism from some quarters, the Mosquito proved to be a versatile and effective aircraft, serving in a variety of roles including low to medium-altitude daytime bomber, high-altitude night bomber, pathfinder, fighter, fighter-bomber, intruder, maritime strike, and photo-reconnaissance aircraft. It was also used by the British Overseas Airways 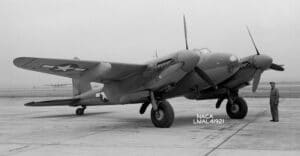 Corporation to transport high-value cargo to and from neutral countries through enemy-controlled airspace. The de Havilland DH 98 Mosquito was flown by the Royal Air Force and other air forces in the European, Mediterranean, and Italian theaters, as well as by the Royal Australian Air Force in the Pacific War. It was eventually replaced by the jet-powered English Electric Canberra in the 1950s. 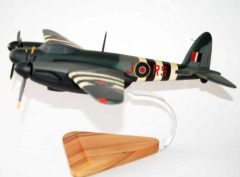