The TS-2 Tracker was a carrier-based anti-submarine warfare (ASW) aircraft developed for the United States Navy in the 1950s. It was designed to be able to operate from aircraft carriers and was equipped with a range of sensors and weapons systems to allow it to detect and track submarines.

The TS-2 Tracker was a twin-engine aircraft that was powered by two radial engines. It had a crew of two and was equipped with a variety of sensors, including radar and sonar, which allowed it to detect and track submarines. It also had a number of weapons systems, including torpedoes and depth charges, which it could use to attack submarines.

The TS-2 Tracker was used by the United States Navy for a number of years, and played a key role in the Navy’s anti-submarine warfare efforts during the Cold War. It was eventually replaced by newer and more advanced aircraft, and is no longer in service.  The ‘T’ version was used as a training aircraft with multiple Navy Training Squadrons. 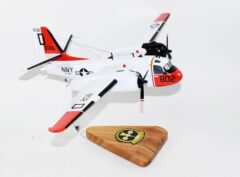 An 18 inch (wingspan) wooden model of the TS-2a Tracker – a second for many a Naval Aviator of the VT-28 Rangers!

Fly with the VT-28 Rangers 133316 in this hand crafted TS-2a Tracker Model. Each model is carved from wood and hand painted to provide a unique piece that will always be treasured. 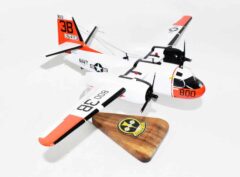 VT-28 Rangers TS-2a Tracker Model An 18 inch (wingspan) wooden model of the TS-2a Tracker – a second for many a Naval Aviator of the VT-28 Rangers! Training Squadron TWO-EIGHT was commissioned on May 1, 1960 under the leadership of … Read More 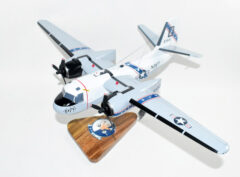