The US Army’s L-19 Birddog was its first fixed wing aircraft ordered post Air Force separation.  Each model is carefully crafted and carved to provide a unique replica. The U.S. Army was in search of an aircraft that could adjust artillery fire and perform liaison duties, preferably made of all metal as the fabric-covered liaison aircraft used during World War II (such as Stinson and Piper products) had short service lives. In response, Cessna Aircraft Company submitted the Cessna Model 305A, an upgraded version of the Cessna 170, after the specification for a two-seat liaison and observation monoplane was released. The Cessna 305A was a single-engine, lightweight, high-wing mo 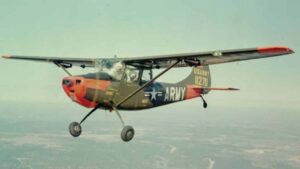 noplane with a strut-braced tailwheel landing gear, featuring tandem seating with angled side windows for improved ground observation. Other differences from the Cessna 170 included a redesigned rear fuselage with a direct view to the rear (a feature later called “Omni-View” that was carried over to Cessna single-engine aircraft after 1964) and transparent panels in the wings’ center section above the cockpit (similar to those on the Cessna 140 and the later Cessna 150 Aerobat model), which allowed the pilot to look directly overhead. A wider door was also added to allow a stretcher to be loaded. The U.S. Army awarded a contract to Cessna for 418 of these aircraft, which were designated the L-19A Bird Dog. The prototype Cessna 305 (registration N41694) flew for the first time on December 14, 1949 and is now located at the Spirit of Flight Center in Erie, Colorado. Deliveries began in December 1950, and the aircraft were soon deployed in the Korean War from 1950 to 1953. An instrument trainer variant was developed in 1953, and later versions featured constant speed propellers. The final version, the L-19E, had a higher gross weight. Cessna produced 3,431 of these aircraft, and it was also built under license by Fuji in Japan. The L-19 received its name, Bird Dog, through a contest held among Cessna 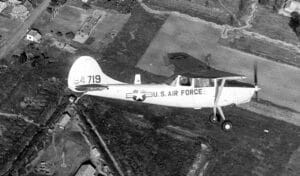 employees to name the aircraft. The winning entry, submitted by Jack A. Swayze, an industrial photographer, was chosen by a U.S. Army board. The name was chosen because the role of the army’s new aircraft was to locate the enemy and orbit overhead until artillery (or attack aircraft) could be brought in to engage the enemy. While flying low and close to the battlefield, the pilot would observe the exploding shells and adjust the fire via radio, similar to how a bird dog (gun dog) is used by game hunters to locate game.

18 inches / Made from Mahogany 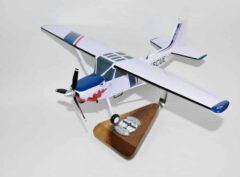 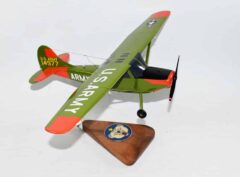 US Army L-19 14977 Birddog Model Fly this famous observation aircraft in this handcrafted L-19 Birddog model with US Army markings.  Each piece is carved from wood and handcrafted to provide a piece you’ll love. 18 inches wingspan The Cessna … Read More 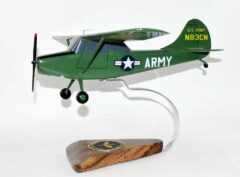 US Army L-19 Birddog Model Fly this famous observation aircraft in this handcrafted L-19 Birddog model with US Army markings.  Each piece is carved from wood and handcrafted to provide a piece you’ll love. 18 inches wingspan The Cessna L-19/O-1 … Read More 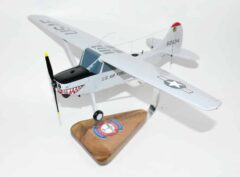 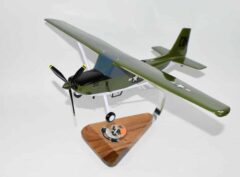