OV-10 Bronco
In October 1964, the Navy awarded a contract to
North American to design a Light Armed
Reconnaissance Aircraft (LARA) for the Marine Corps.
Two years later, the LARA had developed into a tri-service
program to provide a Counter-Insurgency (COIN)
aircraft for the United States Armed Forces. HML-267
accepted the first article for the Marine Corps in
February 1968. A total of 356 Broncos were accepted
for Navy and Marine Corps use and for foreign military
sales. 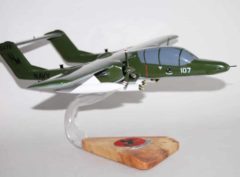