Fly with the VT-86 Sabrehawks again with this F-8 Crusader model. Each model is carefully carved from wood and expertly painted to provide a unique and treasured piece.

“During the 1960s VT-86 was tasked with providing radar training for the F-4D and F-8E pilots, and as such operated a small number of T-39Ds equipped with the AN/APQ-94 fire control radars.  In addition to the T-39Ds, the squadron operated a number of F_8 Crusaders.  The Sabre Hawks were based at NAS Gynco while flying the Crusader” 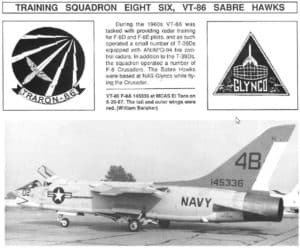 Training Squadron 86 is known by several names: TRARON EIGHT SIX, VT-86, or the Sabrehawks, a name derived from its history of flying the T-39D/G/N Sabreliner and the TA-4J Skyhawk II. The squadron was established on the 5th of June 1972, under the operational control of Commander, Training Air Wing EIGHT (TRAWING 8) at Naval Air Station Glynco, Georgia. The mission of the new squadron was to conduct advanced Naval Flight Officer (NFO) training for the U.S. Navy and U.S. Marine Corps, which had previously been overseen by Naval Air Technical Training Center (NATTC) Glynco. The training was in four areas: Radar Intercept Officer, Basic Jet Navigation, Airborne Electronic Warfare and Airborne Tactical Data Systems. Training was conducted in aircraft previously assigned to and supported by NATTC Glynco until February 1973, when the squadron accepted 24 T-39 Sabreliners, 20 A-4C Skyhawks, 2 EC-121K Warning Stars, 12 TS-2A Tracker aircraft, and approximately 350 enlisted maintenance and support personnel from NATTC and NAS Glynco. After receiving the aircraft and personnel, the squadron’s mission was expanded to include flight support for Air Intercept Control and Ground Controlled Approach training functions.

VT-3 Red Knights T-34C (Marines) Model 12 inch model of the T-34C of the VT-3 Red Knights- a first for many a Naval Aviator. Makes the perfect gift post solo! *Pictures shown may or may not be exact model shipped.  … Read More