Capture your TACAMO time with this VQ-7 ROUGHNECKS model.  Each model is carefully crafted from wood and painted with exacting detail to provide a piece that you can proudly display.

Fleet Air Reconnaissance Squadron SEVEN [VQ-7] The Naval Training Support Unit was redesignated VQ-7 on 01 November 1999. Initially the squadron did not have an officially approved insignia. The VQ-7 students eventually join a Navy air wing fully integrated on Tinker AFB, carrying out a mission for joint operations. There are two operational TACAMO squadrons: Fleet Air Reconnaisance Squadrons 3 and 4. Both fly the E-6 Mercury, a modified Boeing 707 airliner. TACAMO’s mission is one of strategic communication, and strategic command and control. The 16 E-6s they operate enable the president and the secretary of defense to directly contact submarines, bombers and missile platforms protecting the United States through nuclear deterrence.

In 1997 Navy instructor pilots used the EC-18B Advanced Range Instrumentation Aircraft, or ARIA, from the 452nd Flight Test Squadron to train naval aircrews who will operate E-6B Mercury aircraft. The E-6 provides communication links between national command authorities and U.S. strategic nuclear forces. A cadre from the Navy’s Fleet Air Reconnaissance Squadron 7, or VQ-7, at Tinker Air Force Base, OK, rotated to Edwards AFB periodically to school student pilots and navigators aboard the EC-18s. VQ-7 aircrews used 452nd aircraft because one of their two aging trainers, a TC-18, was grounded in 1997 after an FAA-mandated inspection. Looking for quick replacements, VQ-7 aviators discovered the 452nd’s EC-18s were built on the same airframe, a Boeing 707, as their TC-18. And with the EC-18B not flying as frequently as in the past, the 452nd FLTS had a readily available product for the Navy’s immediate need. The agreement between the 452nd and VQ-7 had the Navy employing the ARIAs until October 1997, with a possible year extension if it hadn’t acquired new trainers by then. 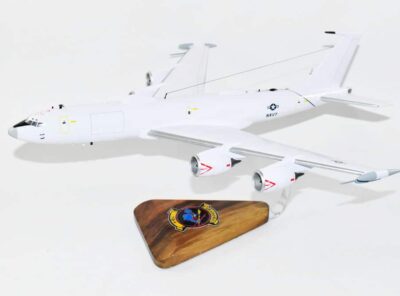 Fly with the VQ-4 Shadows in this handcrafted E-6A Model.  Each piece is carved from wood and painted to provide a one of kind piece.   Our pieces seek to recreate memories of these glorious aircraft.