Capture your first flight in the Poseidon with this 18 inch solid wood and meticulously carved VP-9 Golden Eagles P-8 Model. We can recreate any airplane and personalize as you see fit.

For the remainder of the 1950s and 1960s, Patrol Squadron NINE participated in numerous deployed operations throughout Asia and the Northern Pacific. VP-9 provided support for night combat operations in the Korean War in which VP-9 P4Y-2 Privateers dropped illumination flares for Marine Corps F7F attack planes to use during strikes on North Korean targets.  Other significant milestones included: changing homeports to NAS Alameda, CA in 1952, a move to NAS Moffett Field, CA in 1963, transitioning to the new P-2V Neptune in 1953, the P-3A Orion in 1963, and the P-3B Orion in 1966.  While deployed to several locations in Alaska in 1958, the squadron flew polar scouting missions for the USS NAUTILUS’ historic first voyage under the polar ice cap.  From 1963 through 1972, the squadron deployed to Okinawa; the Philippines; Kam Ranh Bay, Republic of South Vietnam; U-Tapao, Thailand, and Guam in support of Operation MARKET TIME and other operations during the Vietnam War.
In1970, while deployed to Marine Corps Air Station Iwakuni, VP-9 earned its third Meritorious Unit Commendation for patrolling more than nine million square miles of ocean, ranging from the Arctic Ocean to the Philippine Sea, and, in the following decades, saw deployments covering over three-quarters of the globe.  In 1976, VP-9 began a new era of maritime patrol aviation with the squadron’s transition to the computerized and upgraded P-3C Update I.  In November 1986, VP-9 became the first squadron to deploy to the Western Pacific area of operations with the APS-137 Inverse Synthetic Aperture Radar (ISAR).  The P-3C Update III was introduced in 1990, expanding the mission capabilities of the squadron.  In 1992, Patrol Squadron NINE moved to a new home, NAS Barbers Point, Hawaii.
During the 1997–1998 Inter-Deployment Training Cycle (IDTC), the “Golden Eagles” were chosen to spearhead the Fleet

introduction of the Anti-Surface Warfare Improvement Program (AIP) P-3C aircraft.  Among other improvements, the state-of-the-art AIP aircraft includes a comprehensive upgrade of aircraft sensors and command, control, communications, computers and intelligence (C4I) capabilities. In recognition of the highly successful deployment and introduction of the new AIP aircraft, VP-9 was awarded the 1998 Coastal Command Trophy. VP-9’s Maintenance Department also earned the prestigious AVCM Donald M. Neal Aircraft Maintenance “Golden Wrench” Award for sustained maintenance excellence.
After the successful initial deployment of AIP to both FIFTH and SEVENTH Fleets, VP-9 again made history with the launch of a Standoff Land Attack Missile (SLAM) during Fleet Battle Experiment ECHO at Point Mugu, CA on April 14, 1999, the first such launch after in-flight target reprogramming. In addition to the normal IDTC requirements, the “Golden Eagles” made a fifth homeport change to Marine Corps Base Hawaii Kaneohe Bay in May 1999.  VP-9 was the first Patrol Squadron to operate from Kaneohe Bay, hosting the multi-national ASWEX and JTFEX 99-1.  The “Golden Eagles” proved their Under-Sea Warfare (USW) prowess when they were called upon to locate and track a real-world target, during Operation PHANTOM MENACE, which resulted in the most successful theater USW prosecution in recent history.  In recognition of its USW expertise, VP-9 was awarded the coveted Captain Arnold Jay Isbell Trophy for USW Excellence for 1999.

VP-9 began an impressive winter deployment to the Western Pacific area of operations in December 1999.  The “Golden Eagles” flew operational missions from Misawa and Kadena, Japan and established detachments throughout the Pacific theater in support of various Fleet operations and exercises.  While operating from these various sites, VP-9 provided an unprecedented level of support to Commander, SEVENTH Fleet; the USS STENNIS and USS KITYY HAWK carrier battle groups, as well as the USS BELLEAU WOOD amphibious ready group.  The squadron also successfully flew in numerous undersea, surface, and amphibious warfare exercises.  The squadron employed the sensors and capabilities of the P-3C AIP aircraft throughout the Western Pacific theater in support of Fleet, theater, and national tasking.
VP-9 returned to Hawaii in June 2000 and immediately began an immensely successful Inter Deployment Training Cycle (IDTC) with a coordinated Harpoon anti-ship missile shot during RIMPAC 2000.  That fall, the squadron assumed the CTF 12 Ready Alert mission and flew a successful search-and-rescue (SAR) mission that rescued two men at sea.  In addition, the squadron won Best Aircrew and Battle Group Honors during the annual ASW Rodeo exercise, called Operation WOLF HUNT, held at North Island, CA.  In December, the squadron sent a detachment to NAS Fallon, Nevada in support of Carrier Air Wing TWO’s strike training and flawlessly employed the newly-arrived AIP capabilities of the P-3C Orion in the role of precision strike targeting.  These operations enabled VP-9’s successful launch in January 2001 of an AGM-84E Standoff Land Attack Missile (SLAM). In June 2001, the squadron again deployed to the FIFTH and SEVENTH Fleet areas of operations, working from three locations:  Diego Garcia, British Indian Ocean Territory; Masirah, Oman; and Bahrain, as well as small detachments to Jeddah, Saudi Arabia, the Seychelles Islands, and Kuwait.  In August, the squadron established a temporary detachment in Australia in support of Anti-Submarine Warfare exercises.
After September 11, 2001, the “Golden Eagles” transformed the Maritime Patrol and Reconnaissance community by flying armed Battle Force Support flights from Masirah, Oman and Diego Garcia to protect local populations and resources.  When Coalition forces began direct action missions against the Taliban, VP-9 flew missions over Afghanistan which included imaging, long range targeting, armed surveillance and reconnaissance, strike missions consisting of SLAM attacks, and battle damage assessment.  The “Golden Eagles” continued to support Operations SOUTHERN WATCH and ENDURING FREEDOM, flying over 1500 flight hours in support Operation SOUTHERN WATCH and over 3000 flight hours in support of Operation ENDURING FREEDOM, including over 100 combat missions.  Two of such missions were strike missions directly targeting Taliban and al Qaeda forces, a first for a MPR aircraft in that AOR.  In all, VP-9 flew over 1100 missions with an amazing 99.5% mission completion rate.  As a busy year ended, VP-9 won the 2001 Battle “E” Arleigh Burke nomination, was recognized by COMSEVENTHFLT for airborne surface warfare excellence, and received the CNO Retention Excellence Award.
The “Golden Eagles” were extremely busy in 2002 and 2003.  Following a successful Middle East deployment, the squadron immediately returned to the business of training for next deployment, drafting two Optics lessons-learned and integrating its IDTC with that of the 3rd Marine Expeditionary Force in Hawaii.  In March 2002, VP-9 wrote three SLAM tactical documents based on those Middle East experiences that have become building blocks for SLAM operations for all MPRA deployers.  In April and May of 2002, the squadron participated in JTFEX 02-2 and the first Multi-Integrated Team Training exercise.  These events showed the forward fighting capabilities, weapons flexibility, and missions of the P-3C Orion.  In addition, the squadron received BZ’s for their efforts in personnel retention excellence from Commander, Patrol and Reconnaissance Wing One. 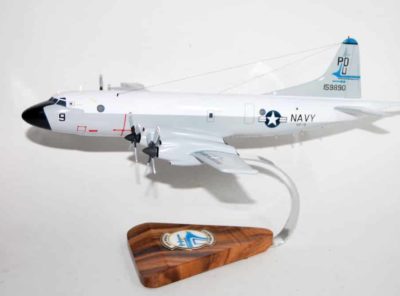 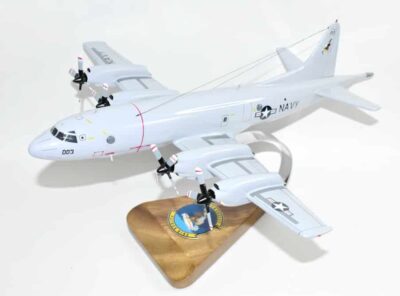 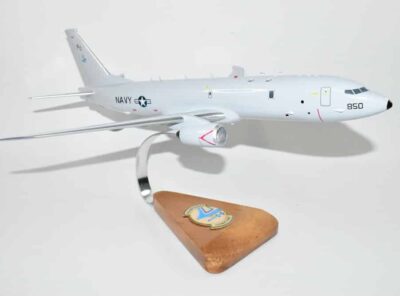 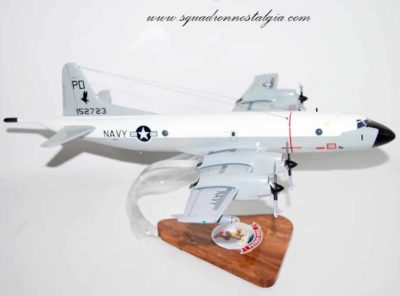 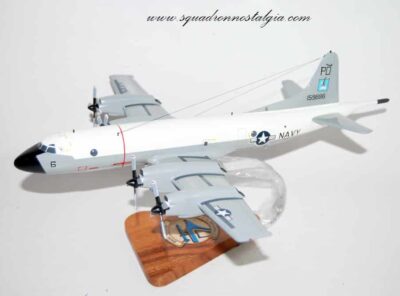 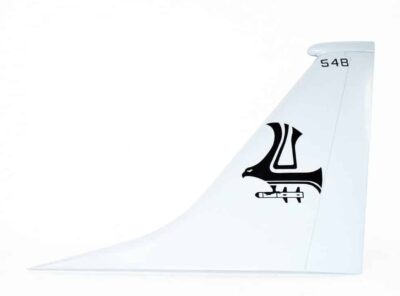 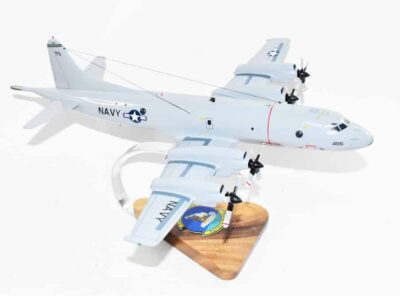