Fly with the VP-1 Screaming Eagles in this handcrafted P-8A Model. Each piece is carved from wood and handpainted to provide a piece you’ll love.

Patrol Squadron ONE (VP-1) was commissioned in Deland, Florida on 15 February 1943 as Bombing Squadron 128 (VB-128). The squadron first flew the twin engine PV-1 on USW missions out of Floyd Bennett Field, New York.

In August 1943, the squadron deployed to Iceland to support anti-submarine operations in the North Atlantic convoy lanes. While flying out of Iceland, the unit was credited with sinking one German U-Boat and damaging another. In December 1943, the convoy lanes were moved south out of range of the “VENTURAS,” and VB-128 was moved to Puerto Rico where it remained until the summer of 1944. The squadron’s designation was then changed to VPS-128 and was moved to the Philippines where it carried out bombing, anti-shipping, and anti-submarine missions until the end of the war. Shortly after VJ Day, the squadron moved to Okinawa where it remained until 1947. During this period, its designation changed to VP-ML-1 and the unit transitioned to the new PV-2 “HARPOON.”

VP-ML-1 returned to San Diego, California in March 1947 and received the new P2V-2 “NEPTUNE,” a longer-range twin engine patrol aircraft. On 13 January 1948, the squadron moved to NAS Whidbey Island, Washington and in September was given its present name.

In February 1966, VP-1 deployed to Iwakuni, Japan and maintained a seven plane detachment at Tan Son Nhut Air Base in the Republic of Vietnam in support of Operation MARKET TIME. VP-1 became the first patrol squadron to suffer casualties in the Vietnam conflict when the air base was attacked on 13 April 1966.

VP-1 was the last fleet squadron to transition to the P-3 “ORION” with the first new aircraft arriving at NAS Whidbey Island on 1 July 1969 from NAS Moffett Field. Unlike many other squadrons that initially received the P-3A, VP-1 transitioned directly to the P-3B. After a few months of aircraft familiarization, the squadron deployed to MCAS Iwakuni. During that deployment, their home-port was changed to NAS Barbers Point, Hawaii.

In September 1977, VP-1 was presented the Coastal Command Trophy for the competitive cycle ending in June, an achievement which reflected intense professionalism and total dedication of all hands in sustaining a high degree of airborne USW effectiveness.

During the latter half of 1979, Patrol Squadron One transitioned from the P-3B to the P-3B TacNavMod “Super Bee”. Following the transition the “Screaming Eagles” again deployed to Cubi Point from May 1980 till November 1980. This deployment saw a three aircraft detachment in Diego Garcia during a period when tensions were running high due to the Iranian Hostage Crisis. The Navy Expeditionary Medal was awarded to the aircrews and support personnel involved in Iranian/Afghanistan contingency operations. Squadron crews also located and assisted in the rescue of more then 35 refugee vessels with over 4,000 Vietnamese on board, earning them the Humanitarian Service Medal.

Beginning in August 1981, the squadron maintained a three aircraft, four crew detachment at NAS Agana, Guam which rotated in October to Diego Garcia in support of carrier battle groups. Operations were staged out of Oman, Djibouti, Kenya, Somalia, Thailand, Pakistan, and Japan.

In November 1982, VP-1 once again deployed to Cubi Point with upgraded aircraft, improved with the addition of IRDS/HACLCS to give the planes infrared detection and Harpoon missile launch capabilities. In February 1983, VP-1 surpassed 14 years and 100,000 hours of accident-free flight operations. VP-1 also won the Donald Neal “Golden Wrench” award for the best P-3 maintenance in the Pacific Fleet.

In August 1985, VP-1 departed Hawaii for NAF Kadena and NAF Misawa for the first ever WESTPAC split-site deployment. Operating detachments out of every VP deployment site in the Western Pacific and Indian Ocean, the “Screaming Eagles” had the opportunity to operate out of Somalia, Djibouti, and Sri Lanka. VP-1 also participated in ASWEX 86-1JA and 86-2JA, a combined exercise with the Japanese Navy, Mines-EODEX 86-1K, and Tae Kwon Do, both combined operations with the Korean Navy and a series of exercises with the Royal Australian Navy.

In February of 1986, VP-1 returned to Barber’s Point where they found a very busy and demanding training cycle which included 1,038 flight hours during an intense 46 day period of ASW and ASUW operations in the THIRD Fleet area of responsibility. During this time they received Patrol Wing TWO’s nomination for the CNO Aviation Safety Award for their outstanding safety program.

In February 1987, the “Screaming Eagles” set out for their second split-site deployment in WESTPAC. Based out of Misawa, the squadron also maintained a three plane detachment at NAF Kadena and participated in Team Spirit 87 which took place in March in South Korea and was one of the highlights of the deployment.

In August 1987, VP-1 returned from deployment, commencing another accelerated at-home training cycle. The squadron was Patrol Wing ONE’s and Patrol Wing TWO’s nominee for the Captain Arnold Jay Isbell Trophy for ASW Excellence and was awarded the CNO Aviation Safety Award and the Coastal Command Award for the competitive cycle ending in December.

In June 1988, the “Screaming Eagles” deployed to NAS Adak, Alaska while maintaining a two crew training detachment in Hawaii. This deployment ended in December 1988 when the squadron returned to NAS Barbers Point. For outstanding performance, VP-1 earned the Battle Efficiency Award and a Meritorious Unit Commendation.

In October 1989, VP-1 was reduced to eight P-3C aircraft as part of a drawdown affecting all VP squadrons. Recognized for its outstanding safety program, the squadron was awarded the CNO Aviation Award for 1989. The squadron completed an extended seventeen month training cycle in April 1990.

During the first half of 1991, VP-1 was the first Rainbow Fleet squadron to transition to the P-3C Update III. While accomplishing this, the squadron made two detachments to Panama in support of CJTF-4. In January 1992, VP-1 deployed to NAS Adak, Alaska. During this deployment, the Screaming Eagles additionally established detachments to Howard AFB, Panama; CFB Goose Bay, Canada; and NAS Moffett Field, California.

In 1993, the Screaming Eagles conducted a tri-site deployment to Diego Garcia; Masirah, Oman; and Kadena, Japan in support of COMSEVENTHFLT and COMUSNAVCENT. During that deployment, VP-1 conducted operations with the Navies of 15 Asian nations and flew sorties from over 20 detachment sites. As a result of the squadron’s performance throughout 1993, VP-1 received the prestigious Coastal Command Trophy and the COMSEVENTHFLT SUW Excellence Award, and earned COMPATWINGSPAC’s nomination for the Arleigh Burke Award. After completing a successful WESTPAC deployment to Misawa and Kadena, Japan in May of 1995, VP-1 completed a change of homeport back to NAS Whidbey Island, Washington.

VP-1 returned from a successful deployment from Misawa and Kadena, Japan in June of 1998. During this deployment, VP-1’s aircrews flew armed reconnaissance and surveillance flights in the Arabian Gulf while also supporting SEVENTH Fleet operations from 16 different nations. Additionally, VP-1 made the first visit by a United States P-3 to Hanoi, Vietnam since the Vietnam War and was awarded the Battle Excellence Award for their outstanding performance of readiness throughout the year.

During the next year of the Inter-Deployment Training Cycle (IDTC), VP-1 transitioned to the P-3C AIP aircraft. This successful evolution was highlighted during the Arabian Gulf Deployment from June to December of 1999. The Screaming Eagles were rotated through a quad-site deployment with detachments in Diego Garcia; Masirah, Oman; Manama, Bahrain; and Doha, Qatar.

Following a highly successful IDTC from June 2001 to June 2002, VP-1 deployed to the FIFTH and SEVENTH Fleet areas of responsibility with the majority of the squadron based in Diego Garcia; additional detachments operated out of Manama, Bahrain and Masirah, Oman. The Screaming Eagle team executed over 6,000 mishap-free flight hours in direct support of Operations ENDURING FREEDOM and SOUTHERN WATCH. Constantly lauded for their on-station effectiveness, VP-1 displayed renewed integration with U.S. Air Force, Army, and Marine forces along with numerous other foreign national forces as part of the multi-national coalition in the fight against terrorism. In December 2002, VP-1 returned home to a hero’s welcome.

VP-1 received the Navy Unit Commendation for their sustained performance during the 2002-2003 IDTC before departing for a six-month deployment in December 2003 to the Western Pacific area of operations supporting Commander, SEVENTH Fleet and Commander, Task Force 72. In addition to Misawa and Kadena, Japan, the “Screaming Eagles” also operated from six different airfields in the Western Pacific in support of numerous multinational exercises. Remote operations included squadron detachments to Thailand, Singapore, Guam, Australia, Republic of the Philippines, and Republic of Korea. As a result, they amassed nearly 3,000 hours of flight time supporting missions across the entire maritime domain.

In 2005 VP-1 was awarded the Arnold J. Isbell award for ASW excellence during a very challenging IDRC in preparation for their 2006 deployment to Japan in support of Commander, SEVENTH Fleet and Commander, Task Force 72 in December 2005. While deployed, they conducted coordinated operations with the Japanese Maritime Self Defense Force, supported five carrier and expeditionary strike groups, and detached to Thailand, Republic of Korea, Philippines, Singapore, Australia, Marshall Islands, Brunei and Guam. In June 2006, the Screaming Eagles returned from deployment having amassed 4,700 flight hours and celebrated 23 years and 135,000 mishap-free flight hours. This accomplishment dates back over 20 years and is a testament to the dedication and skill of both the Screaming Eagle maintenance team and combat aircrews.

In 2007 “The Screaming Eagles” sent eight combat aircrews, over a period of seven months, to fifth fleet in support of Operation Iraqi Freedom and Operation Enduring Freedom. The remainder of the squadron remained busy preparing for their upcoming deployment. Empire Challenge allowed VP-1 to display its capabilities through joint operations helping to expand the tactical use of the P-3. VP-1’s good name continued to spread in Valiant Shield in August; an operation designed to test the interoperability of US forces, and involved 30 ships and 280 aircraft.

VP-1 began a WESTPAC deployment in November 2007. The screaming eagles were dispersed between 3 deployment sites. Based primarily out of Kadena, Okinawa VP-1 also maintained detachments in Misawa, Japan and the Republic of the Philippines. The deployment began with TAMEX, an exercise in conjunction with the Australian Navy, and LINKEX in which VP-1 and Republic of Korea Navy P-3s worked together in developing the maritime defense of the Republic of Korea. On 17 December 2007 the Red Stripe program affected the entire P-3 fleet. Red Stripe addresses the aging P-3 fleet by removing planes from a flying status so that they can be overhauled. Red Stripe greatly affected VP-1. “The Screaming Eagles” went from eight aircraft to four and were still tasked with the same operational commitment. VP-1 excelled in meeting the demands of deployment with a 50% reduction in assets. The squadron participated multiple exercises including, Snapdragon Red, Distant Thunder, CMPOP with South Korea, Cobra Gold with Thailand, and two separate detachments to Guam. In June of 2008 Patrol Squadron ONE returned from deployment to its home aboard N.A.S. Whidbey Island. “The Screaming Eagles” are currently maintaining their readiness for the next time their talents are required of them. 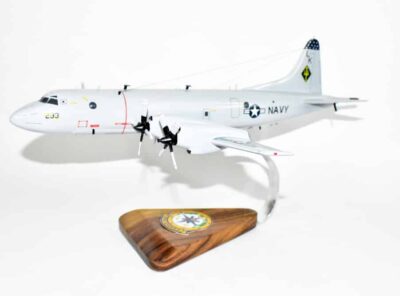 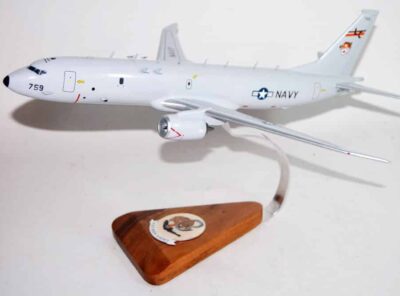 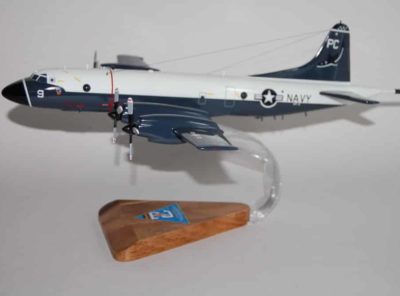 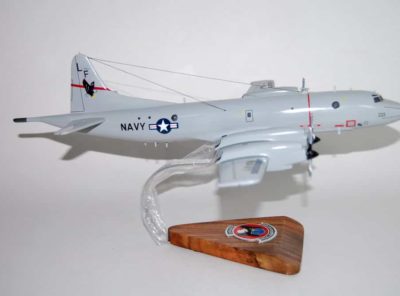 VP-16 War Eagles P-3c (333) Model **Discounted due to tail letters reversed on port side. We’re making one BUNO at a time in this 18 inch wooden VP-16 War Eagle P-3C Orion model.  Each model is carefully crafted from wood … Read More