Fly with the VMF-211 Wake Island Avengers squadron again in this F4U Model! Each model is carefully carved from wood and hand painted to provide a piece you’ll love!

Marine Fighter Attack Squadron (VMFA)-211 is one of two operational squadrons operating the F-35B Lightning II assigned to Marine Aircraft Group 13, 3rd Marine Aircraft Wing. Their mission is to support the MAGTF Commander by destroying surface targets and enemy aircraft, day or night under all weather conditions during expeditionary, joint or combined operations.

VMFA-211 can trace its lineage to January 1, 1937 when Marine Fighting Squadron 4 (VF-4M) was activated at Naval Air Station San Diego, California. On July 1, 1937 VF-4M was re-designated Marine Fighting Squadron 2 (VMF-2) and by the end of the year, had completely reequipped with Grumman F3F-2s which replaced F3F-1s and a few even older F2F-1s. The squadron participated in annual Fleet Problems while at San Diego and even played a part in the making of the movie “Dive Bomber.” Several future Medal of Honor recipients served with the squadron during this period, including Henry Elrod, Robert Galer, and Gregory Boyington. In January 1941, the squadron moved to Marine Corps Air Station Ewa, Hawaii and was re-designated VMF-211 on July 1, 1941.

In November 1941, VMF-211 embarked 12 of its 24 Wildcats and 13 of its 29 pilots aboard the USS Enterprise for movement to Wake Island, the scene of the squadron’s heroic battle. On December 8, 1941 the Japanese attacked Wake, destroying seven of the aircraft on the ground. Over the next two weeks, the remaining five planes repelled numerous attacks and inflicted great losses on the enemy.

During the course of this defense, the Marine ground forces and VMF-211 caused the loss of at least four enemy warships, including the first major Japanese naval vessels sunk during the Pacific war. The squadron was also credited with 8 aircraft destroyed. After the loss of its last aircraft, the squadron became a ground unit and fought until the surrender of the atoll. The first Marine airman to be awarded the Medal of Honor in World War II was VMF-211’s Henry T. Elrod. A planned operation to reinforce Wake Island was deemed too dangerous by the fleet command, and on December 23 Wake Island was finally overrun by a numerically superior enemy.

The squadron’s rear echelon at Marine Corps Air Station Ewa lost all but one of its twelve F4F-3s during the attack on Pearl Harbor, and even this lone survivor was lost when it was transferred to the Navy. Slowly rebuilding as personnel and aircraft became available, the squadron, now under the command of Major Luther S. Moore was deployed in May 1942 to Palmyra Atoll in the South Pacific and adopted the name “Avengers” in memory of those squadron members who were killed or captured on Wake Island. When first deployed, VMF-211 was equipped with the Brewster F2A-3 and it was not until July that sufficient numbers of Grumman F4F-4 Wildcats became available to re-equip the squadron. As the Pacific Campaign continued the squadron transitioned to the F4U Corsair for the remainder of the war. VMF-211 participated in the Treasury-Bougainville Campaign, Battle of the Bismarck Sea, Northern Solomon, Battle of Leyte Gulf and Southern Philippine campaigns.

After World War II, VMF-211 participated in the occupation of China where they would eventually provide cover for American forces evacuating the country before the Communist takeover in December 1948. Following this action they returned to Marine Corps Auxiliary Air Field Edenton, North Carolina, in 1949. While operating aboard the USS Coral Sea (CV-43) in 1952, the squadron was re-designated Marine Attack Squadron 211 (VMA-211) when they transitioned to the AD-4N Skyraider. In 1957, the squadron received its first A4D-1 Skyhawks and subsequently moved to Marine Corps Air Station El Toro, California in 1958. VMA-211 flew various versions of the Skyhawk, receiving the A4D-2 (A-4B) in 1958, the A4D-2N (A-4C) in 1960, the A-4E in 1964, and the A-4M in 1976.

With escalation of the Vietnam War, VMA-211 moved to Japan in 1965 and commenced the first of four deployments to the Republic of Vietnam. In August 1976, the squadron returned to MCAS El Toro.

VMA-211 was deployed in the spring of 1972 to Naha Air Force base on Okinawa and within three months was redeployed to Bien Hoa Air Base in Viet Nam. It was the only strategic American fighting unit left in Viet Nam except for small Army Air Cav unit in Bien Hoa.

In September 1987, the squadron celebrated an aviation milestone when it passed 30 years of flying the McDonnell Douglas A-4 Skyhawk. After successfully completing the last overseas deployment with the A-4M Skyhawk in 1989, VMA-211 began transferring these aircraft to the 4th Marine Aircraft Wing in preparation for transition to the AV-8B Night Attack aircraft. In June 1990 the squadron began flying the Night Attack variant of the Harrier. During this time the Avengers were awarded Marine Corps Aviation Association “Attack Squadron of the Year” three times, in 1995, 1996, and 1998.

In September 2000, the squadron began introduction of the latest Harrier variant, the AV-8B II+ radar aircraft. The squadron soon fielded a complement of both Radar and Night Attack Harriers.

After the September 11 terror attacks, the squadron deployed to the Arabian Sea aboard the USS Bonhomme Richard (LHD-6). The Avengers participated in Operation Enduring Freedom, flying combat missions against targets in Afghanistan from January to March 2002.

After a short break, the following January found the Avengers aboard the USS Bonhomme Richard. This time the squadron was headed for the Persian Gulf, in support of Operation Iraqi Freedom (OIF). In one month of combat flying, the squadron flew over 360 sorties and 640 hours of flight time. The squadron returned to Marine Corps Air Station Yuma in May 2003.

In September 2006, the Avengers again deployed in support of Operation IRAQI FREEDOM to Al Asad Air Base. From January until August 2009, the squadron again deployed as part of the 31st Marine Expeditionary Unit on board the USS Essex (LHD-2).

In April 2012, the Avengers deployed in support of Operation ENDURING FREEDOM, moving from Kandahar Airfield to British-run Camp Bastion in July.

While at Camp Bastion, the Avengers once again found themselves engaged in ground combat as they helped to repel a Taliban attack on the base. During the attack, six Harriers were destroyed, and two severely damaged. Two Marines were also killed, including the squadron commander, LtCol Christopher “Otis” Raible.

The Avengers once again prepared for combat operations in the summer of 2014. VMA-211 Detachment Alpha deployed aboard the USS Makin Island in July 2014. Shortly afterwards, in September 2014 the VMA-211 main element deployed as a part of SPMAGTF-CC-CR 15.1 in direct support of Operation INHERENT RESOLVE. VMA-211 Harriers both aboard the USS Makin Island and forward deployed engaged in combat operations against ISIL in Iraq and Syria from October 2014 to March 2015. On its last combat deployment operating the AV-8B Harrier, VMA-211 executed over 650 combat missions, 4500 combat hours and employed over 91,000 pounds of ordnance against the enemy in support of Operation Inherent Resolve. 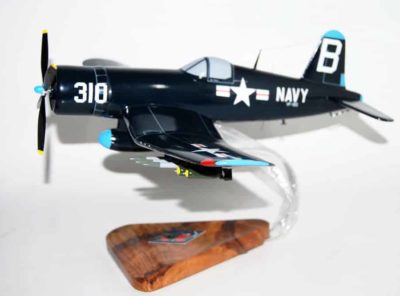 VF-193 Ghostriders F4U4 Corsair Model Fly with the Ghostriders of VF-193 in this handcrafted F4U Corsair. Each piece is carved from wood and handpainted to provide a piece you’ll love. VF-142 Ghostriders was a US Navy fighter squadron established on … Read More 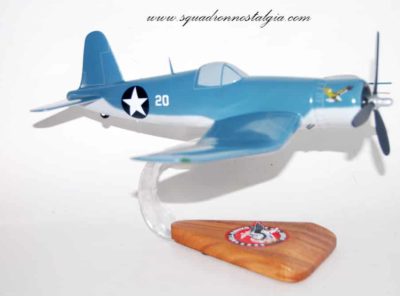 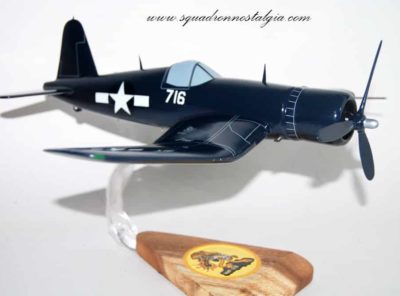 VMF-218 Hellions F4U-1D Model Fly with the Hellions of the VMF-218 in this hand crafted F4U-1D model. Each model is carefully crafted from wood and hand painted to provide a piece you’ll love. 18 inches. World War II VMF-218 was … Read More 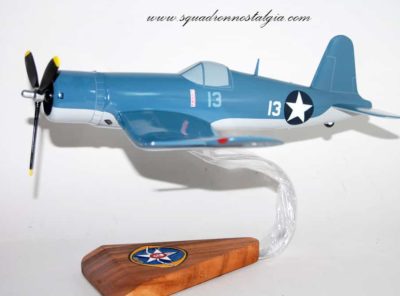 VMF-124 Whistling Death F4U-1 Model Fly with VMF-124 in this hand crafted F4U. Each model is carved from wood and hand painted to provide a piece you’ll love. 18 inches VMF-124 was formed on 2 September 1942 at Camp Kearney, … Read More 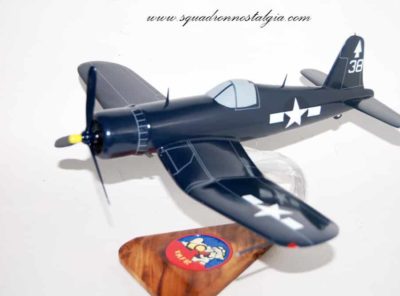 VMF-112 USS Bennington F4U-1D A handcrafted wood model of an F4U-1D of VMF-112. Each model is carefully crafted and painted to provide a piece you’ll love. 18 inches Marine Fighter Attack Squadron 112, was originally activated as VMF-112, at San … Read More 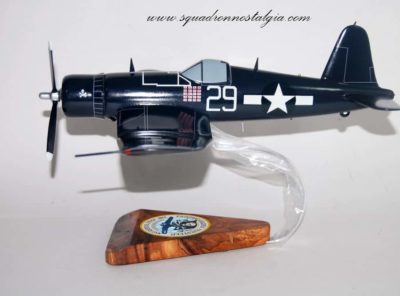 VF-17 Jolly Rogers F4U Model Fly with the Jolly Rogers of VF-17 in this hand crafted F4U model. Each piece is carved from wood and hand painted to provide a piece you’ll love. VF-17 was established on January 1, 1943 … Read More 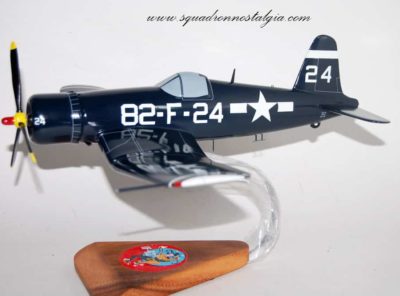 VF-82 Ironmen F4U Model Fly with the Ironmen of VF-82 in this handcrafted F4U model. Each piece is carved from wood and hand painted to provide a piece you’ll love. Fighter Squadron 82 or VF-82 was an aviation unit of … Read More 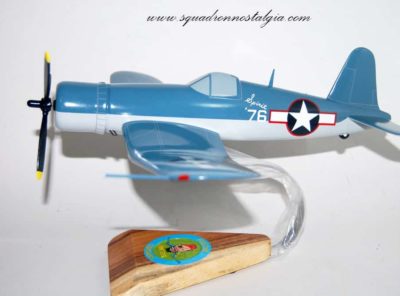 VMF-215 Fighting Corsairs F4U Fly with the Fighting Corsairs in this hand crafted F4U model. Each piece is carved from wood and hand painted to provide a piece you’ll love. The squadron was activated on March 1, 1942, as Marine … Read More