Relive flying with VF-41 and the Black Aces in this handcrafted F-14A model. This 18 inch model is meticulously painted and carved and will provide you a piece you will love displaying.

Deep in the desert of Arizona is an aircraft graveyard, known as the “Boneyard.” Relics of past eras of aviation sit row upon row for literally as far as the eye can see. The progression of Naval Aviation, and the material history of squadrons like the Black Aces of Strike Fighter Squadron 41, stands amidst both the civilian and military remnants contained within these acres of storied history.

In one section sit rusting, prop-driven, gull-winged F4U Corsairs, of the type first used by then VF-41 during their maiden cruises following World War II. In another, F-4 Phantoms used by the Black Aces in Vietnam recall their missions over dense jungle and against wily adversaries. And in still another, the majestic F-14 Tomcat, perhaps the fighter best associated with the Ace of Spades, has joined her steel sisters in much deserved rest. To represent them all, an entire continent away, a VF-41 Black Ace Tomcat sits proudly perched, alone, in front of the Museum of Naval Aviation History in Pensacola, FL.

Yet while these marvels of flight are the physical manifestation of a fighter squadron, the men and women who flew and maintained them are the true source of the warrior spirit that has pervaded VFA-41 since its initial inception. Their backgrounds were and continue to be a microcosm of America herself, but one and all, they are warriors who, in the words of Robert Heinlein, “voluntarily stood between the desolation of war and civilization” time and again.

Though the decades passed and innovations evolved, the daring spirit of the men (and in modern times, women) has remained the same regardless of the technological changes around them. Even though 63 years have passed since the Black Aces were first commissioned on the green fields of a long-since forgotten Naval Air Station in Virginia, and her aircraft and duty stations have changed innumerable times, the men and women who flew and fought these marvels of engineering have all held to the ethos that has transcended time and space, and one that History has validated time and again: “FIRST TO FIGHT; FIRST TO STRIKE.”

The Black Aces began their journey on June 1st, 1945, at Air Station, Chincoteague, Virginia when they were commissioned as an F4U Corsair squadron. This late commissioning precluded them from seeing enemy action as World War II wound down, but by the time of their first aircraft transition, VF-41 had made numerous cruises to the Mediterranean as the Cold War began and the Soviet Union challenged the United States for supremacy in Europe.

In the midst of the Korean War, the Black Aces entered the jet age, with aircrew and maintainers welcoming the F2-H Banshee. Once again, the Aces did not see enemy combat, but instead were charged with patrolling the seas of the Mediterranian against the rising Soviet threat. By the end of that decade, VFA-41 received new jets in the form F3H-2 Demon, the first such aircraft to possess radar guided air-to-air missiles. The Demon was short lived, but provided the foundation for the next Black Ace aircraft, the venerable F-4 Phantom.

Soon after receiving the Phantom in 1962, the Black Aces were called upon to deploy just miles from the U.S. coast near Key West Florida during the Cuban Missile Crisis. VF-41 was instrumental in ensuring the blockade of Soviet flagged merchant vessels was successfully executed, stopping further nuclear missiles from reaching Fidel Castro. The Black Aces literally saw “the other guy blink.”

World events did not abandon the Aces, as less than three years later in 1965, the Black Aces and their Phantoms began patrols off the coast of the then-little known country of Vietnam. Their time at sea was punctuated by providing primary fighter escort for massive air strikes against North Vietnamese targets. And although VFA-41 was known for its air interdiction, photo reconnaissance and flak suppression roles, it was the ordeal of a single young pilot that left a lasting legacy and imprint upon this fabled squadron.

Lieutenant (junior grade) David Wheat was a radar intercept officer just six months from his winging when he and his pilot, Lieutenant Roderick Mayer were shot down during a day air strike against the Thai Nguyen bridge northeast of Hanoi. Both were listed as Missing-in-Action, although LT Mayer passed away soon after the crash. LTJG Wheat, meanwhile, was captured and spent the next seven and a half year in North Vietnamese captivity. Upon his return home with the rest of his imprisoned brethren in 1973, this Black Ace, despite years of torture and solitary confinement, stated: “It’s been an honor to serve our fine country. You think of us as heroes but we didn’t do anything that you, the average American, wouldn’t have done under similar circumstances. Faith in the American people and government were the prime factors that sustained me during the long internment. Knowing that we would be coming back to a land of freedom and opportunity was a great lift.”

Meanwhile, the same year young LTJG Wheat returned to the United States, the Black Aces continued their worldwide involvement by deploying in support of the peacekeeping mission following the Yom Kippur War in the Middle East. It was an area of the world they would return to many times in the following decades.

By the end of the 1970s, VF-41 had transitioned from their aging Phantoms to the swing-wing F-14 Tomcat. They were soon put to use, diverted from a scheduled Med cruise to the Arabian Sea to head off the developing Afghani/Iranian crisis of 1980, spending 144 continuous days at sea, the most since the cessation of hostilies after World War II.

Just over one year later, in August of 1981, the Black Aces found themselves once again in the Mediterranean. During a routine combat air patrol mission on the 19th of that month, a flight of VF-41 Tomcats was fired upon by 2 Libyan Su-22 Fencers. The Fencers were quickly engaged by the pursuing Black Aces, and both Libyan jets shot down. These were the first recorded air-to-air kills for the Navy since Vietnam, and the first ever for the F-14.

The remainder of the 1980s was spent in numerous deployments to the Middle East in response to events such as the Marine barracks bombing in Beirut and the hijacking of TWA flight 847. Their expertise of the region paid dividends when multinational forces gathered in December of 1990 to oust Saddam Hussein from the sands of Kuwait. The Black Aces compiled over 1,500 flight hours, but even more impressive was its unprecedented 100 percent sortie completion rate, a true testament to the skills of the maintainers who kept the Black Ace aircrews in the air.

Throughout the 1990s, the focus of VF-41 shifted away from the forces of the Middle East and to the tumultuous regions of Eastern Europe following the fall of the Iron Curtain. In 1995, the Black Aces once again made Naval Aviation history by being the first Tomcat squadron to employ air-to-ground ordinance against enemy targets during Operation DELIBERATE FORCE over Bosnia-Herzegovina.

They returned to the region in 1999 to fly combat missions over Kosovo following further tensions in the former Yugoslavian region. Their cruise was documented in the book Black Aces High. VF-41 continued to make history by being the first squadron to employ air-to-ground ordinance in two theaters of operation in the same deployment, supporting OPERATION SOUTHERN WATCH over Iraq following their combat missions in Kosovo.

In April 2001, the Black Aces began what was to be their last Tomcat cruise, and while returning home in September of that year, were suddenly called back into action after the terrorist attacks of September 11th. VF-41 was the first squadron over the beach in the initial phases of Operation Enduring Freedom, dropping 200,000 lbs of laser guided ordinance against Taliban and al-Queda targets within the first month of combat. They returned home in December, decommissioning their beloved Tomcats to become the first operational F/A-18F Super Hornet squadron, and officially adopting the Strike Fighter Squadron (VFA) moniker.

Since the transition, the Black Aces have made three combat deployments to Iraq, one in each of 2003, 2005 and 2007. The first supported the opening stages of the war, once again compiling the remarkable sortie completion rate of 100 percent. The second was most recently documented in the PBS miniseries “Carrier.” The 2007 cruise took the Black Aces to both the Iraqi and Afghani theaters of operation.

In February 2012, VFA-41 completed a seven month deployment aboard the USS JOHN C STENNIS (CVN-74) in the Arabian Gulf and North Arabian Sea in support of Operation Enduring Freedom and the final combat missions of Operation New Dawn. Less than six months later after an abbreviated turn around, the Black Aces once again deployed aboard STENNIS for an eight-month deployment in support of Operation ENDURING FREEDOM. During this time, STENNIS was the United States Navy’s only deployed aircraft carrier. The Black Aces returned on April 29, 2013 and are currently in the middle of a post-deployment sustainment phase.

Thus, the story of America herself during the past five decades is the story of VFA-41. An unbroken string of unnamed men and women who forever will be Black Aces are the giants upon whose shoulders VFA-41 now stands, and remain the voices and faces of too often emotionless historical fact. The lessons learned, and rules literally written in blood, are what makes the Black Aces of today what they are. History is an unpredictable mistress, but whatever she directs, you can be sure the Black Aces will be there to partake. 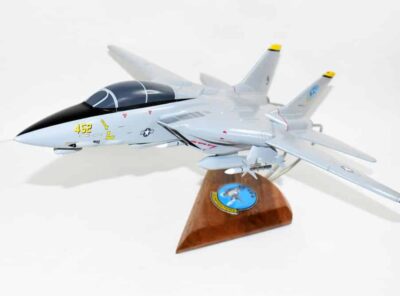 VF-124 Gunfighters F-14a 162588 (1987) model Relive flying one of the greatest Navy fighter jets in this carefully carved and painted F-14a model of the VF-124 Gunfighters. Model is 18 inches in length and has wings that move. It is … Read More 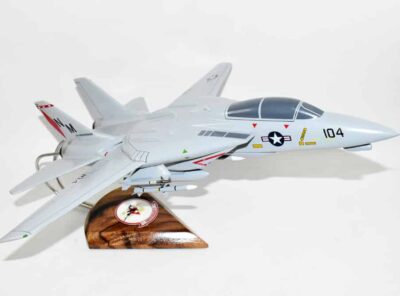