Fly off the USS Carl Vinson again with the VAQ-139 Cougars in this 18 inch EA-18G model. Each model is carefully carved and painted to provide a unique treasure that you’ll love.

The Cougars of VAQ-139 became operational 1 July 1983 under the command of CDR Richard A. Clark while flying the ICAP (Improved Capability) EA-6B Prowler. During their first year of operation, the Cougars, home-based at NAS Whidbey Island, WA, participated in numerous operations. In 1985, the Cougars embarked on their inaugural deployment to the Western Pacific (WESTPAC) and Indian Ocean (IO) onboard USS CONSTELLATION (CV 64) as an integral part of Carrier Air Wing FOURTEEN (CVW 14). The same year they were awarded a Meritorious Unit Commendation. 1986 proved to be an outstanding year for the young squadron, as the Cougars were awarded a Navy Unit Commendation and also won the “triple crown” of the Prowler community by winning the 1985 CNO Safety “S,” first place in the 1986 Battle Readiness Competition, and the 1985-86 Commander, Naval Air Force, U.S. Pacific Fleet, Battle Efficiency “E” Award. From April to October 1987, the Cougars went on a WESTPAC/IO deployment on CV-64, which even included carrier operations while at anchor in the Diego Garcia lagoon. They maintained their standards of excellence by earning a second CNO Safety “S” and a Navy Expeditionary Service Medal. The Battle “E” awarded in 1988 was the squadron’s second consecutive award. 1988 concluded with the Cougars beginning a WESTPAC/IO deployment.

After transitioning to USS INDEPENDENCE (CV 62) in late 1989 the Cougars left on a WESTPAC/IO deployment in June 1990. They were an essential part of the first U.S. forces responding to Iraq’s invasion of Kuwait during Operation DESERT SHIELD. The Cougars led numerous missions deep into the Arabia Gulf and significantly contributed to the contingency planning in anticipation of Operation DESERT STORM. 1990 also saw a third CNO Safety “S,” a Navy Unit Commendation, and a Southwest Asia Service Medal awarded to the squadron.

In 1993, the Cougars made the transition to USS CARL VINSON (CVN 70) and began the long work-up cycle. In February of 1994, the Cougars went on a WESTPAC/IO deployment during which they earned the CVW-14 “Top Hook.” They were awarded the Prowler Tactical Excellence Award and the CNO Safety “S” for superior performance and safe practices throughout 1994.

July 23, 2002, the Cougars departed for a scheduled six-month WESTPAC/IO deployment in support of Operations ENDURING FREEDOM over Afghanistan and SOUTHERN WATCH over Iraq, earning them the Global War on Terrorism Expeditionary Medal.

In May of 1996, the Cougars earned the coveted “triple crown” for the second time, receiving the Battle “E,” CNO Safety “S,” and Admiral Arthur W. Radford Award for the outstanding Prowler Squadron in the U.S. Navy. 1997 brought another carrier transition for the Cougars, this time to USS ABRAHAM LINCOLN (CVN 72). The Cougars deployed on a WESTPAC deployment in June of 1998 in support of Operation SOUTHERN WATCH. They also earned the 1998 CNO Safety “S.”

The Cougars deployed in support of Operation SOUTHERN WATCH again in 2000. They received the prestigious COMNAVAIRPAC Battle “E” for excellence in combat for the year 2000. July 23, 2002, the Cougars departed for a scheduled six-month WESTPAC/IO deployment in support of Operations ENDURING FREEDOM over Afghanistan and SOUTHERN WATCH over Iraq, earning them the Global War on Terrorism Expeditionary Medal. The close of 2002 brought with it numerous awards for VAQ-139. For the third time in the squadron’s history, the Cougars earned the coveted “triple crown” by receiving the Battle “E,” CNO Safety “S,” and Admiral Arthur W. Radford Award.

While transiting back to the United States, on New Year’s Day 2003, due to rapidly changing world events, the USS ABRAHAM LINCOLN BATTLE GROUP turned around and returned to the Arabian Gulf. After another month of participation in Operation SOUTHERN WATCH, the Cougars became an integral part of Operation IRAQI FREEDOM. Cougar Prowlers supported strikes deep into Baghdad during the first night of the war, and eventually flew 61 combat missions and fired 17 High Speed Anti-Radiation Missiles(HARM). Following three weeks of intense combat operations, LINCOLN left the Arabian Gulf and headed home. Arriving there in May 2003, LINCOLN completed nearly 10 months at sea. For their tireless efforts, the Cougars were awarded the Navy Unit Commendation and a second Global War on Terrorism Expeditionary Medal.

In May 2004, the Cougars and CVW-14 deployed to the Pacific for the last time with Block 89 aircraft, this time onboard USS JOHN C. STENNIS (CVN 74). Upon returning home in November 2004, the Cougars were awarded CVW-14’s Golden Wrench Award for outstanding aviation maintenance and the 2004 CNO Safety “S.” In their tradition of leading the fleet, the Cougars made history again on March 18th, 2005 when they accepted the first Improved Capabilities (ICAP) III Prowler. With this new technology, the squadron became the forefront of tactical development in the EA community, paving the way for the EA-18G in the early stages of its development. The 2005 CNO Safety “S” award added another mark to their notable year.

In early February 2006, VAQ-139 put the new systems to the ultimate test by becoming the first squadron to use the ICAP III aircraft in combat. They supported United States and Coalition forces in Iraq during the ongoing efforts of Operation IRAQI FREEDOM. Flying over 650 sorties and 1650 combat hours over three and half months while conducting split-site operations from USS RONALD REAGAN (CVN 76) and Al Asad Air Base in Iraq, the Cougars ensured protection for Coalition Forces and the development of a free Iraq. The Cougars returned from deployment and received the 2006 Prowler Squadron of the Year for Tactical Excellence. They also received the 2006 CNO Safety “S,” CVW-14’s Golden Wrench Award, the Association of Old Crows Award for Electronic Warfare Excellence, the Grampaw Pettibone Award, and the Iraqi Campaign Medal.

In January 2007, the Cougars and CVW-14 were unexpectedly called to duty for a WESTPAC surge deployment. For three months the Cougars and the REAGAN patrolled the seas of the Western Pacific filling in for the USS KITTY HAWK (CV 63) while it was in port for scheduled maintenance. The Cougars once again made Prowler history by being the first operational squadron to fly the EA-6B with a new digital flight control system.

In May 2008, the Cougars began their next scheduled WESTPAC/IO deployment. They supported survivors of Typhoon Fengshen, which had affected nearly five million people in the Philippines. Following their humanitarian work, they headed to the Northern Arabian Sea to support U.S. and Coalition Forces on the ground in Afghanistan in support of the Global War on Terrorism. The Cougars were awarded the Battle “E,” the CNO Safety “S,” and the Humanitarian Service Medal.

In May 2009, the Cougars left again for a Surge WESTPAC/IO deployment. They continued their support of U.S. and Coalition Forces in overseas contingency operations in Afghanistan. Following their return in October, 2009, the squadron became the first to accept the newest version of the Prowler, ICAP III, Block IV.

At the beginning of 2010, the Cougars assisted VX-9 in the operational evaluation of the Block IV aircraft, testing various capability improvements to the ICAP III weapon system. In February and March, the squadron participated in Red Flag, a large force exercise with U.S. and foreign Air Force participants. At Red Flag, held at Nellis Air Force Base, Las Vegas, NV, the Cougars put their crews and aircraft through strenuous testing in a simulated war. In March, the Cougars sent two aircraft to Naval Air Station Lemoore to participate in a HARM live-fire exercise with other Air Wing aircraft.

In April the Cougars started the work-up cycle in preparation for their upcoming deployment. The men and women of VAQ-139 continue their dedication to excellence as they stand ready to protect freedom around the world.

In July the Cougars started their participation in RIMPAC exercises off the coast of the Hawaiian Islands. They shot two HARM at the Ex-USS ANCHORAGE. In August they returned home.

In September the Cougars participated in AIR WING Fallon to sharpen their war fighting skills along with CARRIER AIR WING FOURTEEN. With AIR WING Fallon complete the Cougars returned home to Whidbey Island, to begin preparing for its 2011 Arabian Gulf Combat Deployment onboard USS RONALD REAGAN.

USS RONALD REAGAN and CARRIER AIRWING FOURTEEN departed from San Diego, Harbor in February 2011. While on deployment VAQ-139 was informed that it had also received the 2010 Association of the Old Crows Award for Electronic Attack Excellence and the 2010 Admiral Arthur W. Radford Award for Meritorious Operational Achievement by Tactical Electronic Warfare Squadron. While deployed VAQ-139 conducted missions in OPERATION NEW DAWN (Iraq) and OPERATION ENDURING FREEDOM (Afghanistan) providing around the clock Electronic Warfare Support to coalition forces engaged in combat.

After this deployment, the Cougars transitioned from the battle tested EA-6B Prowler to the state-of-the-art EA-18G Growler. Upon completing the transition, the Cougars began work-ups for their inaugural EA-18G deployment with CARRIER AIR WING 17 (CVW-17). During September of 2013 VAQ-139 conducted the first successful live fire of the AIM-120 Advanced Medium-Range Air-to-Air Missile (AMRAAM). Following this event, the Cougars flew the combat-loaded Growler aboard the USS CARL VINSON for Tailored Ship’s Training Availability (TSTA). After the New Year the Cougars returned home to NAS Whidbey Island. In the spring of 2014 the Cougars participated in AIR WING Fallon and Composite Training Unit Exercise (COMPTUEX). During these events, VAQ-139 exceeded every standard of tactical excellence in the EA-18G. At the completion of COMPTUEX, VAQ-139 was designated combat-ready and headed home to NAS Whidbey Island to make final preparations for deployment. While deployed on what would be the longest carrier deployment since the Vietnam War, the Cougars supported OPERATION INHERENT RESOLVE and provided over 75% Airborne Electronic Attack support in theatre. During the deployment, the Cougars were awarded the 2014 CNO Aviation Safety Award, the 2015 Commander Electronic Attack Wing Pacific Fleet (CVWP) Semi-annual Safety “S,” the Commander Naval Air Forces (CNAF) Blue “M,” and the 2014 U.S. Fleet Forces (USFF) Retention Excellence Award. The Cougars returned home in June of 2015. Since returning from deployment, the Cougars have taken part in three detachments at Nellis Air Force Base, and went underway for two carrier qualification periods, thus ensuring a high state of readiness and tactical expertise. 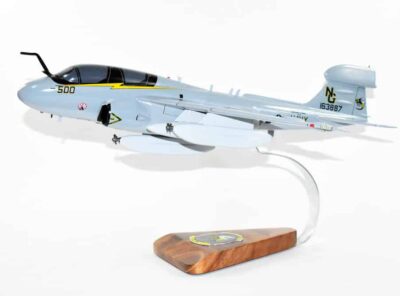 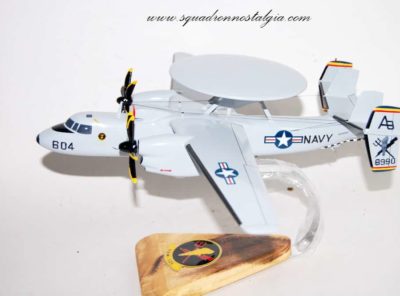 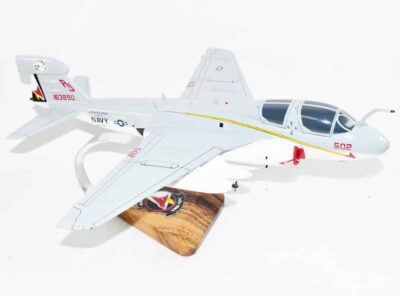 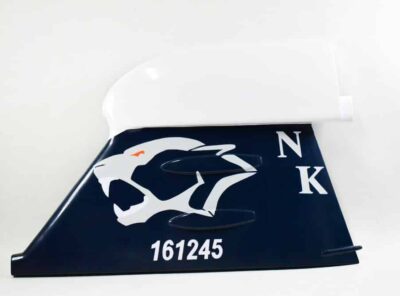 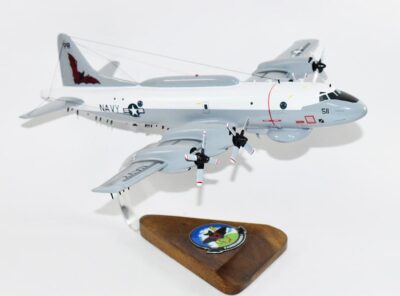