Fly with the VAQ-135 Black Ravens again in this EA-18G wooden model.  Each plane is carved from wood and meticulously painted to give you a genuine piece of art that you will be proud to display.

In March 2001, the BLACK RAVENS deployed to the Western Pacific in support of OPERATION SOUTHERN WATCH.  Following September 11, 2001, USS CARL VINSON and CVW-11 took station off of the coast of Pakistan and conducted air strikes in support of coalition air and ground forces during OPERATION ENDURING FREEDOM.  The squadron returned home in December 2001 and received the Chief of Naval Operations Safety “S” Award, Battle Efficiency Award and the Old Crows Award as the most tactically proficient Prowler squadron.

In July 2004, the RAVENS participated in Joint Expeditionary Force Experiment (JEFX), Nellis Air Force Base, Las Vegas, Nevada, the first of five 2004 detachments in preparation for the 2005 WESTPAC deployment.  The RAVENS completed 2004 with a two-month detachment aboard USS NIMITZ (CVN 68) for TSTA/COMPTUEX and received the CVW-11 Golden Wrench for maintenance excellence.

On 7 May 2005, the BLACK RAVENS deployed aboard USS NIMITZ (CVN 68) as part of Carrier, Strike Group ELEVEN.  During the 2005 deployment, VAQ-135 conducted operations in the Western Pacific and Arabian Gulf, participating in OPERATION IRAQI FREEDOM from the Arabian Gulf and Al Asad Air Base, Iraq, providing critical support to Multi-national Ground Forces in Iraq.  The squadron received the CVW-11 / CVN 68 TEAMWORK Award twice during the deployment, initially for the first line period and again at the end of deployment. Additionally, VAQ-135 received the CVW-11 Golden Wrench Award for deployment, as the finest Maintenance Department in CVW-11.

Late August 2006 was the beginning of a busy and challenging workup period for the BLACK RAVENS, as they completed six detachments in only six months.  These included TRIDENT FURY, SFARP, TSTA, COMPTUEX, AIRWING FALLON, and JTFEX.

Again the BLACK RAVENS deployed with Carrier Strike Group ELEVEN on the USS NIMITZ (CVN 68) to the Persian Gulf and Arabian Sea. From April to September 2007, sorties were conducted in support of coalition ground forces during Operation IRAQI FREEDOM and Operation ENDURING FREEDOM.  History was made as the NIMITZ became the first nuclear powered carrier to port in Chennai, India.  The BLACK RAVENS finished the deployment by supporting multi-carrier Exercises VALIANT SHIELD 2007 and MALABAR 2007/2008.

Only four months after their return, the BLACK RAVENS deployed again on USS NIMITZ (CVN 68) for another WESTPAC deployment in January 2008.  The squadron participated in Operation FOAL EAGLE with South Korean Naval Forces and provided key electronic attack training for the South Korean Navy.  The BLACK RAVENS returned from WESTPAC to NAS Whidbey Island in June 2008.

In January 2009, VAQ-135 began work-ups for their summer deployment onboard USS NIMITZ (CVN 68). They deployed on WESTPAC shortly after in July 2009 and supported Operation ENDURING FREEDOM with more than 4 months of in-theater operations. The BLACK RAVENS returned home from their deployment in March 2010. In August 2010 the Black Ravens participated in SUSTEX, a three week exercise, with the USS NIMITZ and CVW-11.

In November 2010 the BLACK RAVENS joined the FRS to start their transition from the EA-6B Prowler to the EA-18G Growler.  On May 1st, 2011 VAQ-135 departed the “Barbwire” pattern, and joined Electronic Attack Wing, U.S. Pacific Fleet, as their Immediate Superior in Command as they transitioned to an expeditionary squadron.  On June 17, 2011 the BLACK RAVENS were deemed Safe for Flight with the EA-18G Growler.

In September of 2011 VAQ-135 began their inaugural work-up cycle in the EA-18G. The Squadron spent 10 days at EWARP in Fallon, Nevada. One week after returning to NAS Whidbey Island the BLACK RAVENS participated in RED FLAG Alaska. In November, VAQ-135 conducted a detachment to JRB New Orleans, performed a HARM shoot, and left for Nellis AFB to participate in Mission Employment Phase. The final work-up before deployment for the BLACK RAVENS was a Joint Interoperability exercise also at Nellis AFB that took place in March of 2012..

The BLACK RAVENS set a milestone for the Electronic Attack community in 2012, by departing on the first EA-18G expeditionary deployment into Afghanistan. The deployment was in support of Operation ENDURING FREEDOM and included a no notice rapid redeployment to Souda Bay, Crete in support of contingency operations. In October the BLACK RAVENS returned home to Whidbey Island. In 2012 VAQ-135 earned their fifth the Chief of Naval Operations Safety “S” Award, as well as their second Battle Efficiency award.

Currently, VAQ-135 is in the work-up cycle for their next Deployment. In mid March of 2013 the BLACK RAVENS returned 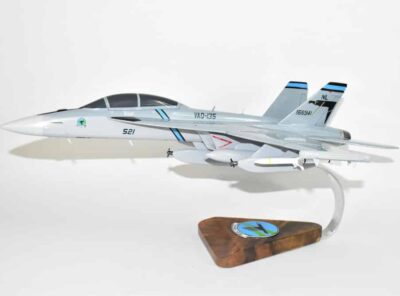 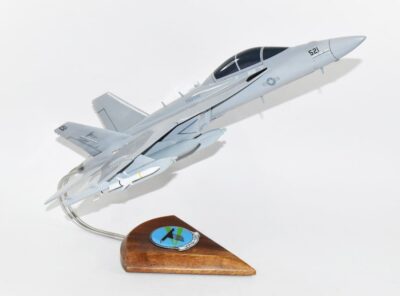 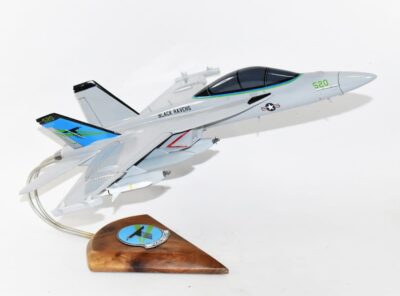 Fly with the VAQ-135 Black Ravens again in this EA-18G wooden model.  Each plane is carved from wood and meticulously painted to give you a genuine piece of art that you will be proud to display. 18 inches. Includes metal medallion on base (not shown)