Fly with the VA-75 Sunday Punchers in this handcrafted A-1H Skyraider Model. Each piece is carved from wood and handpainted to provide a piece you’ll love.

From the Dictionary of Naval Aviation Squadrons

VB-18 SB2C-3 on USS Intrepid during the Battle of Leyte Gulf in 1944
5 February 1944: Lieutenant Commander Dickson, the squadron’s commanding officer, was killed in a training exercise
12 October 1944: Squadron commanding officer, Commander Mark Eslick, was lost in combat during an attack on Kiirun Harbor, Formosa.
24–26 October 1944: The squadron participated in the Battle for Leyte Gulf, part of the operations surrounding the invasion of Leyte. On 24 October VB-18’s SB2Cs flew sorties against a powerful Japanese surface force in the Sibuyan Sea. These attacks contributed to the sinking of the Japanese battleship Musashi, one of the two largest battleships in the world. Lieutenant Donald L. Wilson was awarded the Navy Cross for scoring a direct hit on a Japanese battleship during the battle. On 25 October the squadron’s planes were part of a Fast Carrier Task Force that attacked the Japanese carrier force in the Battle of Cape Engano. Four Japanese carriers were sunk during this engagement, the squadron’s commanding officer, Lieutenant Commander George D. Ghesquiere was awarded the Navy Cross for leading his squadron in this battle and Lieutenant Benjamin G. Preston was awarded a Gold Star in lieu of his third Navy Cross for leading a division of dive bombers in this battle.On the 26th, squadron planes participated in attacks on the Japanese surface force which was retiring from the Battle Off Samar.
Postwar
September–December 1946: The squadron participated in the USS Leyte’s shake-down cruise in the Caribbean and a goodwill cruise to South America for the inauguration of Chile’s President.
25 January 1949: the squadron conducted cross-deck operations with the British carrier HMS Triumph in the Mediterranean.

VA-75 AD-4 launches from USS Bon Homme Richard in 1952
23 June 1952: The squadron’s first combat action in the Korean War was a joint operation with Air Group 7 and the U.S. Air Force in an attack against hydro-electric complexes in North Korea that had previously been restricted from attack.
11 July 1952: The squadron participated in a combined attack against Pyongyang, North Korea, with aircraft from CVG-7, USS Princeton (CV-37), the U.S. Air Force, Marine Corps, Australian Air Force and British Royal Navy.
5 December 1952: On a strike against enemy troop concentrations the squadron’s commanding officer, Commander H. K. Evans, was lost when his aircraft was hit by antiaircraft fire and crashed.

VA-75 AD-6s c.1960
April 1961: The squadron operated from USS Independence in an area south of Guantanamo Bay, Cuba, during the Bay of Pigs Invasion
22 October–22 November 1962: Participated in the Cuban Quarantine while embarked on Independence.
14 November 1963: The first operational fleet squadron to be assigned the A-6A Intruder.
Vietnam War[edit] May–December 1965: Operating from Independence, VA-75 was the first squadron to deploy with the A-6A Intruder and operate the aircraft in a combat environment.
18 September 1965: The squadron’s commanding officer, Commander Leonard Vogt, was lost during a combat mission while engaged in a night bombing attack on enemy patrol boats.
24 February 1968: Commander Jerrold M. Zacharias and Lieutenant Commander Michael L. Hall were awarded the Navy Cross for their action with VA-35 in planning and executing a coordinated A-6A strike on Hanoi.

September and October 1970: VA-75 operated from USS Saratoga while on station in the eastern Mediterranean during the Black September in Jordan
7 October 1971: VA-75 became the first A-6 squadron to drop sonobuoys. The integrated A-6A radar system and the A-6B antiradiation system were utilized for exact positioning and release of the sonobuoys. This event was part of an overall evaluation of the CV Concept being conducted by the Saratoga to determine the carrier’s capability to operate effectively in both the attack and ASW roles.
June–October 1972: Participated in Operation Linebacker, heavy air strikes against targets in North Vietnam and mining operations along coastal waters.
6 August 1972: Commander Charles Earnest and Lieutenant Commander Grady L. Jackson were awarded the Silver Star for directing a successful night inland rescue of a downed pilot in a heavily defended area of North Vietnam.
10 October 1972: Lieutenant Commander John A. Pieno and Lieutenant Junior Grade John R. Fuller were awarded the Silver Star for their actions as bombardier/navigators of a two plane attack, at dusk, on the North Vietnamese airfield of Bai Thong.
28 November 1972: The squadron’s commanding officer, Commander Charles Earnest, was lost in an aircraft accident following a catapult launch from Saratoga while operating on Yankee Station.
19–29 December 1972: Participated in Operation Linebacker II
18 January 1975: Following violent demonstrations against the American Embassy in Nicosia, Cyprus, VA-75 operated from Saratoga off the coast of Cyprus.
April 1976: As tensions increased in Lebanon, Saratoga and her air wing wing operated south of Crete, prepared to provide support for the evacuation of Americans from that country if it became necessary.

1980s-1990s
8 January 1980: The squadron’s commanding officer, Commander A. J. Lynch, and Lieutenant Charles J. Morrow were lost when their aircraft struck several parked planes during a night landing and careened into the sea.
June 1982: Israel invaded Lebanon and USS John F. Kennedy was ordered to operate off the coast of Lebanon. VA-75 operated from the carrier, preparing for possible air support if it became necessary to evacuate Americans from Beirut, Lebanon.
4 December 1983: During Kennedy’s operations off the coast of Lebanon in support of the Multinational Peacekeeping Force, several of the carrier’s F-14 reconnaissance aircraft received hostile fire from Syrian surface-to-air missile and anti-aircraft positions on 3 December. A retaliatory strike was flown by elements from CVW-3 and aircraft from Independence against the Syrian antiaircraft positions near Hammana, Lebanon. Three of VA-75’s A-6Es participated in the strike and it also provided two KA-6D tanker aircraft for the operation.
6 February 1984: VA-75 dropped laser guided bombs in response to a request from U.S. Marines (part of the Multinational Peacekeeping Force) at the Beirut International Airport to supress attacks against their positions.
February 1987: With the increased tensions in Lebanon surrounding the American hostages, Kennedy was ordered to operate off the coast of Lebanon. VA-75 flew operations from the carrier in preparation for possible evacuation.
January 1989: During routine training exercises off the northeastern tip of Libya, two F-14 Tomcats were approached by two Libyan Air Force MiG-23 jets, and after repeated attempts for a peaceful intercept, the F-14s shot down the Libyan aircraft. VA-75’s KA-6D tankers provided refueling support for the two F-14s
August 1989: During a training exercise, a squadron A-6E SWIP aircraft was the first to fire an AIM-9H Sidewinder air-to-air missile, scoring a direct hit with the missile.
September–October 1990 and December 1990–January 1991: The squadron participated in Operation Desert Shield, the build up of American and Allied forces to counter a threatened invasion of Saudi Arabia by Iraq and as part of an economic blockade of Iraq to force its withdrawal from Kuwait 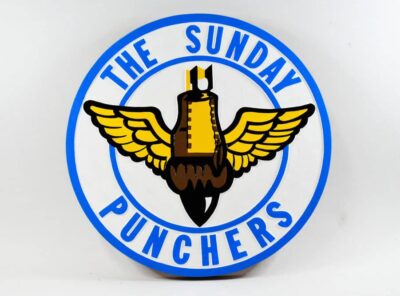 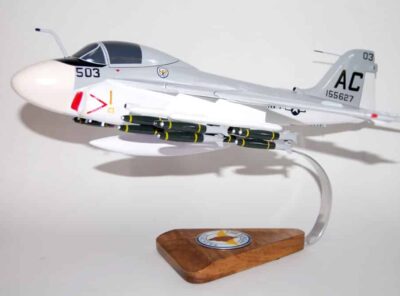 Fly again with the VA-75 Sunday Punchers in this 18″ wooden A-6e model. Each model is carefully carved and painted by expert craftsmen to provide a piece that you’ll love displaying and telling fantastic stories. Specifications: Length: 18 inches Wingspan: … Read More 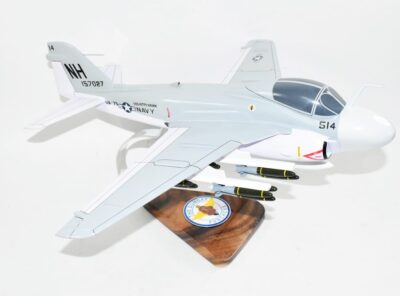 Fly with the VA-75 Sunday Punchers USS Kitty Hawk 1968 157027 in this handcrafted A-6A Model. Each model is carefully carved from wood and hand painted to provide unique piece you’ll love. 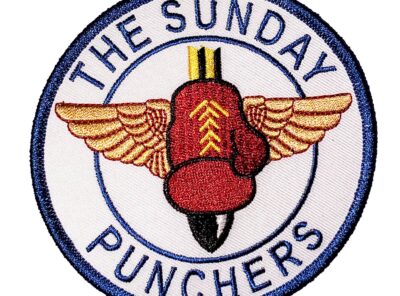 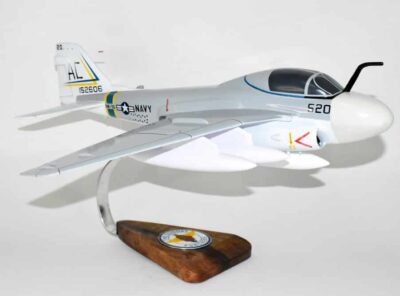 Fly again with the VA-75 Sunday Punchers in this 18 inch wooden KA-6D model with 1976 markings. Each model is carefully carved and painted by expert craftsmen to provide a piece that you’ll love displaying and telling fantastic stories. Specifications: … Read More 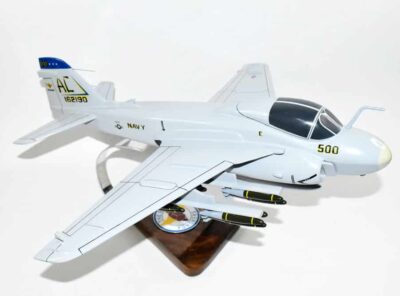 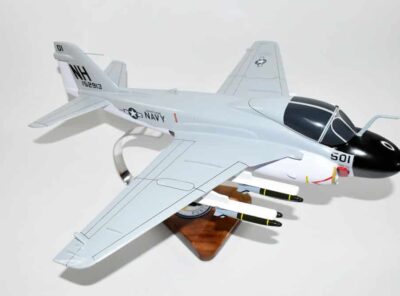 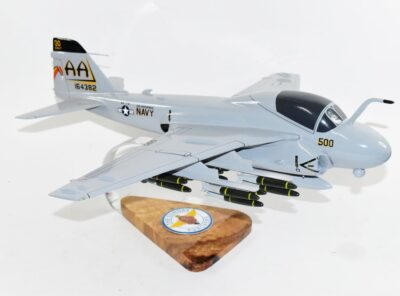 Fly again with the VA-75 Sunday Punchers in this 18 inch wooden A-6a model. Each model is carefully carved and painted by expert craftsmen to provide a piece that you’ll love displaying and telling fantastic stories.