Fly with the VA-65 Tigers in this handcrafted A-1H Skyraider Model. Each piece is carved from wood and handpainted to provide a piece you’ll love.

Attack Squadron 65, nicknamed The World Famous Fighting Tigers, was an attack squadron of the United States Navy. It was the second squadron to bear the VA-65 designation. The squadron was established as Torpedo Squadron VT-74 in 1945, redesignated as VA-2B in 1946, as VA-25 on 1 September 1948, and finally redesignated VA-65 in 1959. It was disestablished in 1993. Known as “The World Famous Fighting Tigers”, VA-65 was one of the last medium attack squadrons to fly the A-6 Intruder and the A-1 Skyraider.

The final home base of VA-65 was NAS Oceana, Virginia (full name Apollo Soucek Field), a Master Jet Base. The squadron occupied the spaces of Hangar 122, port side. Hangar 122 is located next to the water tower and field identifier revolving light. These spaces included maintenance areas on the hangar deck, office spaces on the second floor, and offices plus ready room on the top floor.

VA-65 is in US Navy nomenclature, a shortened acronym for ATKRON-65, this stands for Attack Squadron-65, VA is broken into V for fixed-wing, A for attack. Also called the Bombing 65th, as it was an attack [bombing squadron]. VA-65 was fleet based, meaning attached to an aircraft carrier for deployments. Their last cruise was during Desert Storm /Desert Shield in 1990–1991 aboard USS Theodore Roosevelt (CVN-71). As was common during the Gulf War, many squadrons painted “nose art” on at least one airplane. VA-65 painted a caricature of comic strip cat Garfield, with a large stick and flight helmet, with the caption, “TR’s Big Stick”

VA-65 was scheduled to take part in a UNITAS cruise [started in 1959 UNITAS has been instrumental in improving working relationships among U.S. and Latin American naval forces] around the horn of South America [with multiple stops] on board the USS Theodore Roosevelt in the summer of 1993. Unfortunately the squadron received word it would disestablished before the cruise. In addition the aircraft carrier did a Mediterranean cruise and a short stint in the Red Sea in 1993, not an UNITAS cruise.

Reasons were budgetary in nature, as the VA-65 Tigers were flying the venerable A-6 Intruder which was being phased out in the early 1990s, and was completely removed from service in 1997. At the time, VA-65 had just won the Atlantic Fleet Battle E Award for best Attack Squadron. 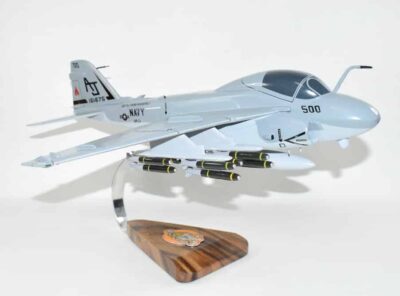 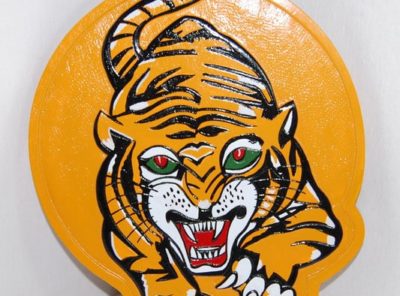 VA-65 Tigers Plaque A beautifully carved 14 inch solid wood plaque of the VA-65 Tigers!   Show your aviation lineage with truly artistic craftsmanship of the Navy’s finest symbols. The use of naval aviation insignia is a modern form of … Read More 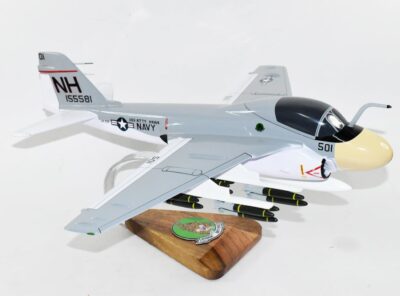 Fly with the VA-65 Fighting Tigers (USS Kitty Hawk 1968) in this hand crafted A-6A Model. Each model is carved from wood and hand painted to provide a unique piece that will always be treasured. 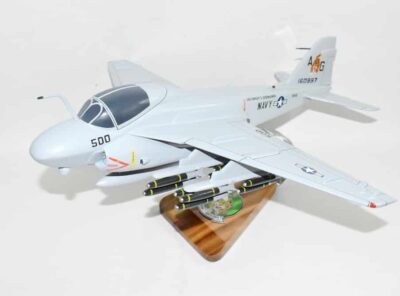