Capture launching off the USS John F Kennedy in this A-7e of VA-46 Clansmen. This 18 inch model is meticulously painted and carved and will provide you a piece you will love displaying.

VA-46’s insignia was approved by CNO on 25 November 1960. The circular insignia had a blue field outlined by two concentric black lines; the McDougal clan tartan, drawn from the heritage of the squadron’s first commanding officer, had dark blue and white lines on a red background, interspaced with green squares; the crest was white, outlined in black with the
Latin words Vincere Vel Mori, meaning to conquer or to die; a white stylized aircraft outlined in black; and the banner was white with the designationVA 46 in black.
Nickname: Clansmen, 1960–1991

14 Jul 1956: VA-46 departed the U.S. aboard Randolph (CVA 15) for deployment to the Mediterranean, equipped with Sidewinder missiles. This was the first overseas deployment of the
Sidewinder.
Oct–Nov 1956: VA-46, along with other units of ATG-202, provided air support for the evacuation of foreign nationals from Alexandria, Egypt, during the Suez War.
Aug 1965: VA-46 and other units of the air wing aboard Shangri-La (CVA 38) operated off the coast of Cyprus in response to a crisis in that country between
Greek and Turkish Cypriots.
25 Jul 1967: The squadron engaged in its first combat operations.
29 Jul 1967: While aircraft were being prepared for the second launch of the day against targets in Vietnam, a fire broke out on the flight deck of Forrestal (CVA 59). Flames engulfed the fantail and spread below decks touching off bombs and ammunition. Heroic efforts by VA-46 personnel, along with other members of CVW-17 and ship’s company, brought the fires under control. Damage to the carrier and aircraft was severe and the casualty count included 132 dead, two missing and presumed dead
and 62 injured.
4 May–15 Nov 1968: VA-46 transitioned to the A-7Corsair II.
17 Sep 1970: While enroute to the Caribbean for training exercises, John F. Kennedy (CVA 67) with VA-46 and other units of CVW-1 embarked, received emergency orders to deploy immediately to the Mediterranean due to the Jordanian Crisis and the hijacking of four airliners by Arab terrorists. They remained on station off the coast of Israel until November.
Oct 1973: Due to the outbreak of war between Israel and Egypt and Syria, Kennedy and her air wing, while operating in the North Atlantic after just completing a Mediterranean deployment, were ordered back to the Mediterranean. During the latter part of October through mid November, VA-46 conducted flight operations while the carrier was on station south of Crete.
22 Nov 1975: During night operations Kennedy collided with Belknap (CG 26) causing major damage to the cruiser. Eight VA-46 personnel received awards for their heroism and devotion to duty as a result of their actions following the collision.
17–19 Sep 1985: VA-46, along with other units of CVW-1, were the first to conduct flight operations from a carrier operating inside a fjord. America (CV 66) operated in Vestfjord, Norway, during this evolution.
14 Apr 1986: Because of terrorist activities linked to Lybia, American forces struck targets in that country. During that action, VA-46 provided air-to-surface Shrike and Harm missile strikes against Libyian radar missile sites.
Sep–Oct 1990 and Dec 1990–Jan 1991: The squadron participated in Operation Desert Shield, the build up of American and Allied forces to counter a threatened invasion of Saudi Arabia by Iraq and as part of an economic blockade of Iraq to force its withdrawal from Kuwait.
17 Jan 1991: Operation Desert Storm, combat operations to remove Iraqi forces from Kuwait, was launched. The squadron’s A-7E Corsair IIs participated in the first
combat strike against Iraqi targets in Baghdad. 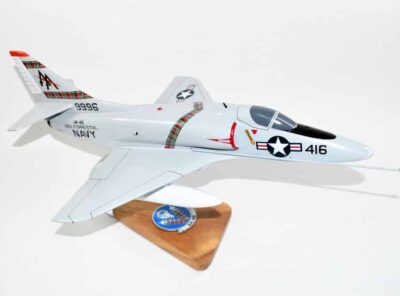 VA-46 Clansmen A-4e (1967) Model Capture launching off the USS Forrestal in this A-4e of VA-46 Clansmen. This 18 inch model is meticulously painted and carved and will provide you a piece you will love displaying. 149996 destroyed in fire … Read More 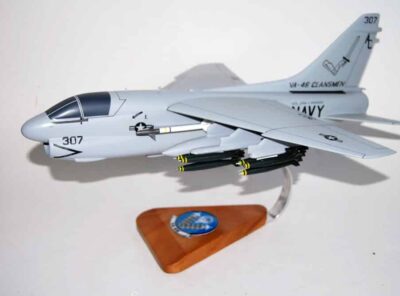 VA-46 Clansmen A-7e (1991) Model Capture launching off the USS John F Kennedy in this A-7e of VA-46 Clansmen. This 18 inch model is meticulously painted and carved and will provide you a piece you will love displaying. VA-46’s insignia … Read More 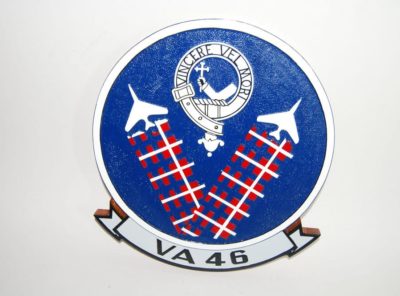 VA-46 Clansmen Plaque A beautifully carved 14 inch solid wood plaque of the VA-46 Clansmen!   Show your aviation lineage with truly artistic craftsmanship of the Navy’s finest symbols. The use of naval aviation insignia is a modern form of … Read More 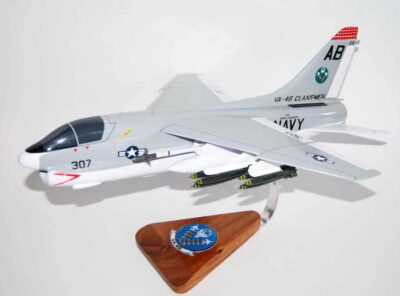 VA-46 Clansmen A-7e Corsair II (1978) Model Capture launching off the USS John F Kennedy in this A-7e of VA-46 Clansmen. This 18 inch model is meticulously painted and carved and will provide you a piece you will love displaying. … Read More