Capture launching off the carrier in this A-7e of VA-174 “Hellrazors” model. This 18 inch model is meticulously painted and carved and will provide you a piece you will love displaying.

B-81 was redesignated VA-13A in November 1946 while the squadron was embarked on USS Princeton (CV-37). In 1949 the squadron transferred to the East Coast. Arriving in Naval Air Station Jacksonville the squadron was redesignated to VA-134 and later VF-174. Operating aboard the USS Coral Sea (CVA-43) with Carrier Air Group Seventeen, VF-174 participated in operations “Protex” and “Caribox” from September 1950 to January 1951. It returned to Jacksonville to transition to the F9F-6 Cougar and then made a short cruise to Guantanamo Bay in May and June 1951 aboard the USS Midway (CVA-41). The Hellrazors were selected as the best fighter squadron in the Atlantic Fleet shortly before they embarked for a six-month Mediterranean Sea cruise in September 1951 aboard the USS Franklin D. Roosevelt (CVA-42).[2]

The squadron returned from the Mediterranean in February 1952 and participated in operations “Mainbase” and “Long Step” in July 1952. In preparation for a globe-circling cruise, VF-174 deployed twice to Guantanamo Bay, Cuba for intensive gunnery training. Both time the squadron was cited for “Outstanding Performance”. After returning from their second “Gitmo” trip in early 1954, the squadron moved to its present home at Naval Air Station Cecil Field and joined Carrier Air Group One. In late 1954 the USS Midway (CVA-41) became the first American carrier to visit the British port of Cape Town, South Africa. While in the Pacific the carrier operated with the Seventh Fleet near Formosa and VF-174 participated in the evacuation of the Tachen Island in December 1954.[2]

Immediately after their return to Cecil Field in August 1955, VF-174 transitioned to the FJ-3 FURY. The squadron operated with the new Furies for only a few months and then transitioned to the F9F-8 Cougar in early 1956. With the new “Cougars” an attack syllabus was added to the normal fighter operations. Acting as both and attack and fighter squadron, the Hellrazors deployed to the Far East in October 1956 aboard the USS Bennington (CVA-20) as a special weapons squadron with Air Task Group One Eighty One. The squadron returned to Cecil Field in May 1957. In January 1958, VF-174 transitioned to the F8U-1 Crusader and in March 1958 began training pilots in F8U’s for Atlantic Fleet squadrons. On 1 May 1958 the squadron relinquished its seagoing role and was officially designated the Atlantic Fleet F8U replacement pilot training squadron.[2]

During the next eight years until 1 July 1966, VF-174 excelled in all areas. The squadron evaluated the Mark IV Full Pressure Suit, the Delmar Missile and Gunnery Target System, and the two-seater TF-8A Crusader. The squadron assumed an all weather fighter capability with the arrival of the F8U-2N in November 1960, and later trained French Navy Pilots in the plane. The squadron received the Aviation Safety Award in 1960 and again in 1962, and the Delmar Target System Award for top efficiency in gunnery exercises in 1963. VF-174 continued in this role until 1 July 1966, when the squadron was redesignated Attack Squadron One Seven Four in preparation for its assignment to conduct the Fleet Introduction Program for the Navy’s newest light attack replacement pilots.[2]

The squadron received its first A-7E in December 1969, and transitioned the Atlantic Fleet’s first squadron VA-81 on 1 June 1970. In addition to conducting squadron transition training, VA-174 continued to train all the replacement pilots and enlisted maintenance personnel who served in the Atlantic Fleet Light Attack Squadrons. As of 1 August 1971, VA-174 had trained 535 pilots, 48 maintenance officers and 4815 enlisted maintenance personnel. VA-174 was the largest aviation squadron in the U.S. Navy. Commander John McCain was the Executive Officer and Commanding Officer of VA-174 in the mid-1970s. 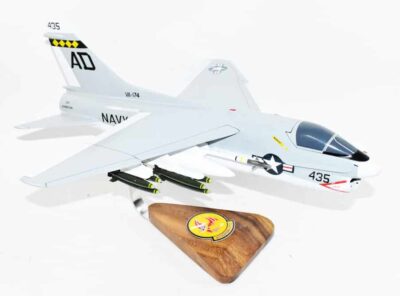 VA-174 Hellrazors A-7e (1976) Capture launching off the carrier in this A-7e of VA-174 “Hellrazors” model. This 18 inch model is meticulously painted and carved and will provide you a piece you will love displaying. Length- 18 inches Made from … Read More 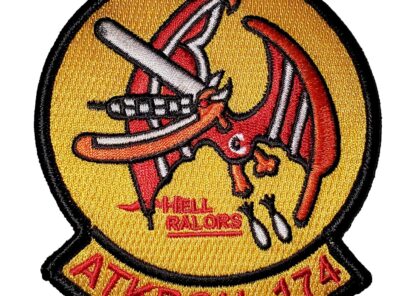 VA-174 Hellrazors 4 inch patch Attack Squadron 174 (VA-174) also known as the “Hellrazors” was a United States Navy attack squadron based at Naval Air Station Cecil Field, Florida,[1] and were attached to Light Attack Wing One. The unit has … Read More 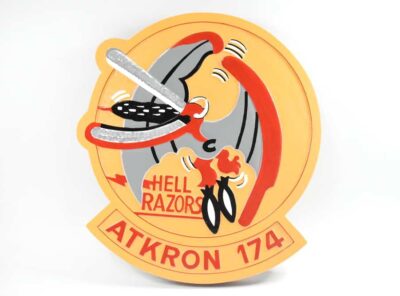 VA-174 Hell Razors Plaque A 14 inch solid wood and meticulously carved plaque of the VA-174 Hell Razors . We can recreate any logo and personalize as you see fit Attack Squadron 174 (VA-174) also known as the “Hellrazors” was … Read More 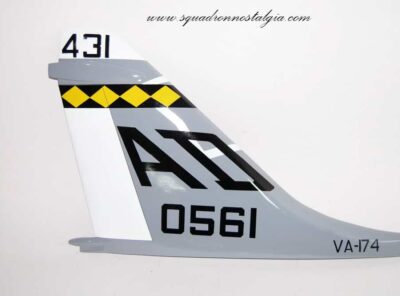 VA-174 Hellrazors A-7 Tail Add another tail to your collection of the VA-174 Hellrazors in this wooden 20 inch A-7 flash. Attack Squadron 174 (VA-174) also known as the “Hellrazors” was a United States Navy attack squadron based at Naval … Read More 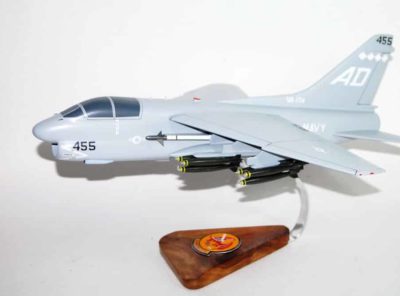 VA-174 Hellrazors A-7e (1987) Model Fly again with the Hellrazors of VA-174 in this wooden 18 inch A-7 model. Each model is carefully carved from wood and painted to provide a beautiful piece of craftsmenship! Length:  18 inches Wingspan: 15 … Read More