Experience the thrill of flying with the legendary Thunderbolts of VA-176 with our handcrafted A-1 Spad model. Each piece is expertly carved from durable mahogany and meticulously hand-painted to capture every intricate detail. Measuring at 1/33 scale, this model is the perfect addition to any aviation enthusiast’s collection. Plus, as a US Naval Aviator owned business, you can trust in the authenticity and quality of our product.

VA-176, established in 1955, was initially equipped with the Douglas AD-6 Skyraider and assigned to the Atlantic Fleet. Over the next few years, the squadron made several deployments, including to the Mediterranean Sea and aboard various aircraft carriers, such as the USS Randolph, Essex, Wasp, and Shangri-La.

In 1966, VA-176, as part of CVW-10, was deployed to Vietnam aboard the USS Intrepid. During this deployment, two members of the squadron achieved fame for successfully engaging a Vietnam People’s Air Force MiG-17, a rare instance of a propeller-driven aircraft defeating a jet-powered adversary.

The squadron transitioned to the Grumman A-6A Intruder all-weather attack plane in 1967 and was assigned to CVW-6. From 1970 to 1991, VA-176 made 18 deployments with CVW-6, primarily to the Mediterranean Sea, but also including deployments to the Indian Ocean. The squadron earned three consecutive Battle “E” awards, for the years 1988-1991. The squadron was decommissioned from active service on 30 October 1992 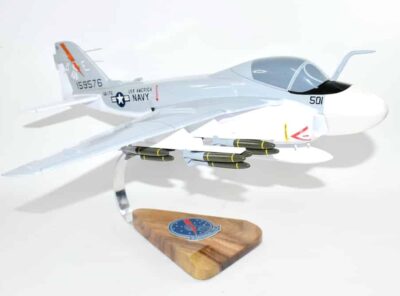 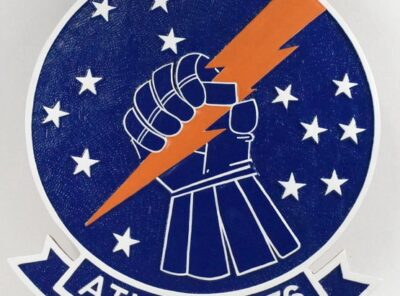 VA-176 Thunderbolts Plaque Proudly display this 14 inch wooden plaque of the VA-176 Thunderbolts.  Each plaque is carefully carved and painted by master craftsman.  This is perfect for the goat locker, stateroom or office. VA-176 was established on 4 June … Read More