Fly with the VA-152 Mavericks in this handcrafted A-1H Skyraider Model. Each piece is carved from wood and handpainted to provide a piece you’ll love.

Operational history
15 October 1951: The squadron participated in its first combat operations in the Korean War.
31 December 1951: Squadron aircraft were used for Operation Pin Wheel. The aircraft were secured to the flight deck, with engines running, and the thrust provided by the aircraft was used to assist in the docking of USS Antietam.
February 1955: Squadron aircraft flew night surveillance operations supporting the evacuation of Chinese Nationalists from the Tachen Islands during the First Taiwan Straits Crisis.
March 1958: Due to revolts and unsettled conditions in Indonesia and the concern for the safety of Americans in the country, USS Hornet, with VF-152 embarked, departed Hong Kong to operate in the South China Sea.
September–October 1958: During the Second Taiwan Straits Crisis, USS Bennington, with VF-152 embarked, operated in the area of Taiwan.
January 1961: Due to the crisis in Laos and the capture of strategic positions in the country by the Pathet Lao force, USS Coral Sea, with VA-152 embarked, was directed to operate in the South China Sea.
11–12 July 1962: The squadron participated in the first carrier flight operations in the Bering Sea since the end of World War II.
April–December 1964: Squadron personnel, while based at Bien Hoa Air Base, South Vietnam, trained South Vietnamese pilots to fly the A-1.
6 and 7 November 1965: Commander Gordon H. Smith was awarded the Silver Star for his participation as Flight Leader in directing and assisting in the first night rescue of a downed aviator in enemy territory on 6 November. This was followed by an attempt to rescue another aviator the following day in the same area.
7 November 1965: Lieutenant Gordon C. Wileen was awarded the Silver Star for his participation in an attempted air rescue of a downed aviator deep in enemy territory.
13 November 1965: Commander Albert E. Knutson was awarded the Silver Star for his attempt to locate and rescue a downed pilot in enemy territory. During the rescue attempt his aircraft sustained 26 hits.
26 October 1966: While on Yankee Station and preparing to launch her first strike of the day, USS Oriskany suffered a disastrous fire. The squadron lost two personnel in the fire and the damage to the carrier was so extensive that it returned to the States for repairs.[1] 16 June 1967 – 31 January 1968: VA-152 is the second-to-last US Navy attack squadron to fly the single-seat A-1H/J Skyraider in combat, as part of Carrier Air Wing 16 (embarked aboard the Oriskany), during the squadron’s and carrier’s third combat cruise to Southeast Asia. VA-152 loses one aircraft and its pilot during this last A-1 cruise, on 15 July 1967. (VA-25 is the very last USN squadron to fly the A-1H/J in combat, completing its third and final combat cruise in early April 1968, aboard the Coral Sea). 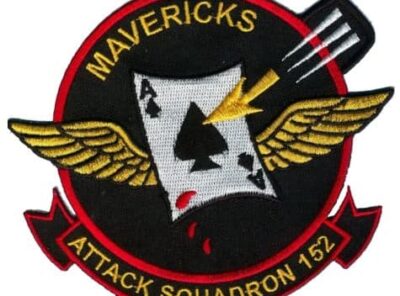