USS Vella Gulf (CG-72) is a Ticonderoga-class guided missile cruiser built for, and in active service with, the United States Navy. She is the second ship named for the Battle of Vella Gulf, a naval engagement in the Solomons campaign of World War II, the first being USS Vella Gulf (CVE-111) an escort carrier commissioned in 1945. She was laid down on 22 April 1991 at Pascagoula, Mississippi, by Litton Industries, Ingalls Shipbuilding Division; launched on 13 June 1992; sponsored by Mary A. McCauley, wife of Vice Admiral William F. McCauley (Ret.); and commissioned alongside Pier 12, Naval Operating Base (NOB) Norfolk, Virginia, on 18 September 1993.

Designed as a multi-mission ship, Vella Gulf is capable of sustained combat operations in Anti-Air, Anti-Submarine, Anti-Surface, and Strike warfare environments. She is employed in support of carrier battle groups, amphibious assault groups, ballistic missile defense, as well as in interdiction and escort missions. Her diverse combat capability is orchestrated by the Aegis Combat System, a fully integrated electronic detection, engagement, and fire control system. Aegis enables Vella Gulf to detect, evaluate, and engage an enemy with great firepower and accuracy.

1990s
Vella Gulf successfully completed sea trials during the month of February 1998. In the months of May and June, she completed a two-month BALTOPS Cruise, taking part in the 26th annual maritime exercise U.S. Baltic Operations (BALTOPS) ’98 in the Western Baltic Sea from 8 – 19 June 1998. During the exercise, the commander, Carrier Group Eight, commanded the exercise from the ship. She then completed an underway replenishment, her LAMPS helicopters moved aboard, she completed a successful command and control exercise (C2X), and had made a port call at Saint John, U.S. Virgin Islands. Upon the completion of C2X, Vella Gulf continued pre-deployment work-ups.

In January 1999, after winning her fifth consecutive “Battle “E”,” the ship commenced training operations while hosting the week-long course Force Air Defense Commander training. Vella Gulf’s successful completion, in February 1999, of Joint Task Force Exercise (JTFEX) ’99 marked the end of a ten-month work-up. The vessel headed out for deployment to the Adriatic Sea on 26 March 1999. After a six-day transit, Vella Gulf took her position in the Adriatic Sea and participated in everything from Tomahawk Strike Ops to Fast-track Logistics Ops as part of Operation Noble Anvil. In May and June, Vella Gulf continued to participate in support of combat operations, fired Tomahawks, assumed warfare commander duties (ADC, ASUWC, ASWC and Launch Area Coordinator), and conducted numerous at-sea refueling and stores replenishment events until the relaxation of weapons posture and cessation of hostilities. Vella Gulf began the month of August engaged in multi-ship exercises, where she participated in DIVTACS, LeapFrogs, Tomahawk exercises, submarine exercises, Flight Ops, and Gunnery practice. On 22 September 1999 she returned home, then in November sailed to Yorktown, Virginia for a complete weapons offload.

In March 2003 she was assigned to Carrier Strike Group Eight.

On 5 January 2007, Vella Gulf departed on a six-month cruise as part of the Bataan Expeditionary Strike Group (BATESG). She conducted operations in the Persian Gulf, Northern Arabian Sea with the French aircraft carrier Charles de Gaulle (in support of Operation Enduring Freedom), Gulf of Oman and Gulf of Aden. She participated in multi-national exercises, including AMAN ’07,[3] hosted by Pakistan. Vella Gulf visited Agadir, Morocco and Gaeta, Italy as liberty ports of call, and twice visited Manama, Bahrain. She returned to her home port in Norfolk, Virginia on 3 July 2007.

Vella Gulf was identified as one of the U.S. Navy ships surrounding MV Faina, a Ukrainian-owned, Belizian-registered ship carrying 33 T-72 tanks, RPGs and other munitions, after she was seized by pirates off Somalia on 25 September 2008. Several photographs used by news services were sourced as having been taken onboard Vella Gulf.[4] Ultimately the ship was not recaptured, and a ransom was paid.[citation needed]

On 11 February 2009 Vella Gulf responded to a distress call from the tanker Polaris in the Gulf of Aden. Polaris reported that pirates in a single skiff were attempting to board the tanker with ladders, though Polaris’s crew was able to thwart their efforts. Upon arriving in the area, Vella Gulf intercepted a skiff with seven men aboard. The crew aboard Polaris identified them as the attackers, and they were taken aboard Vella Gulf, transferred to the supply ship USNS Lewis and Clark for processing, and sent to Kenya for trial.

The following day, 12 February, Vella Gulf responded to a distress call from the Indian freighter Premdivya which reported that she had been pursued by pirates who had fired at the ship. Vella Gulf dispatched a helicopter to the scene which fired warning shots and chased the pirate skiff down. Vella Gulf launched a boarding party in two RHIBs (inflatable boats) and captured nine pirates, who were again transferred to Lewis and Clark for processing.

2010s
In 2012 Vella Gulf Petty Officer 2nd Class Daniel Wilt sexually assaulted a female sailor while at sea, telling her he planned to kill her and dispose of her body overboard. He was sentenced to life imprisonment.

In December 2015 the ship’s website listed her as assigned to Carrier Strike Group Twelve.[8] On 23 April 2017, Vella Gulf left for an eight-month deployment to support maritime security operations in the Persian Gulf.” In July, she joined Carrier Strike Group 11 for three months, conducting air strikes against ISIS targets in Iraq and Syria. She returned on 15 December. 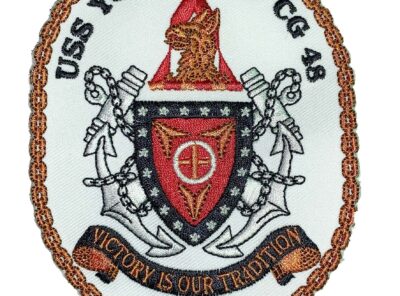 USS YORKTOWN CG-48 Patch – Sew On A 4.5 inch squadron patch of the USS YORKTOWN CG-48. USS Yorktown (DDG-48/CG-48) is a decommissioned Ticonderoga-class cruiser in the United States Navy from 1984 to 2004, named for the American Revolutionary War … Read More 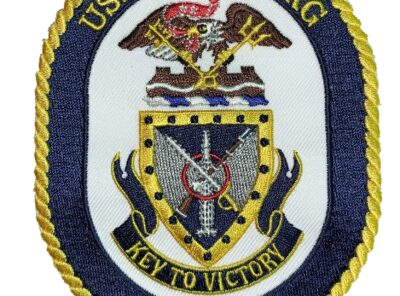 USS VICKSBURG CG-69 Patch – Sew On A 4.5 inch squadron patch of the USS VICKSBURG CG-69. USS Vicksburg (CG-69) is a Ticonderoga-class guided missile cruiser serving in the United States Navy. She is named for both the land Battle … Read More 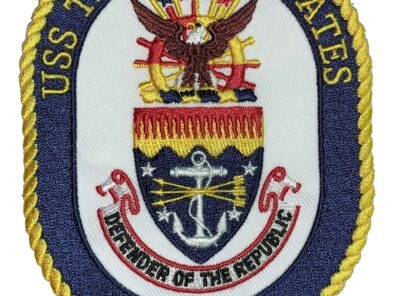