Introducing the USS Scorpion (SSN-589) Submarine Model – a must-have for any naval enthusiast or military history buff. This detailed replica of the Skipjack-class submarine is expertly crafted from mahogany wood, ensuring a high-quality and authentic finish.

Measuring 20 inches in length, this scale model is the perfect size for display on a shelf or desk. It accurately captures the distinctive features of the USS Scorpion, including its sleek hull and conning tower.

Honor the memory of the brave crew of the USS Scorpion, who tragically lost their lives while serving their country. This model makes for a poignant addition to any military collection.

Order yours today and add a piece of naval history to your home or office.

The USS Scorpion (SSN-589) was a nuclear-powered submarine in the United States Navy that was named after the sixth vessel, and the second submarine, to bear the same name. Tragically, the Scorpion and its entire crew were lost at sea on May 22, 1968, making it one of only two nuclear submarines ever lost by the US Navy (the other being the USS Thresher). The disappearance of the Scorpion was one of four mysterious submarine incidents in

1968, along with the Israeli submarine INS Dakar, the French submarine Minerve, and the Soviet submarine K-129. The wreckage of the Scorpion, including its armaments and nuclear reactor, can still be found at the bottom of the North Atlantic Ocean. 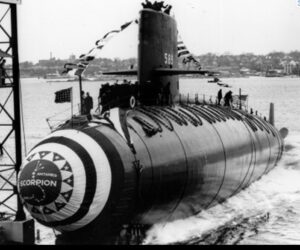