Sail again with the crew of the USS Santa Fe SSN-763 in this handcrafted wooden submarine model. Each piece is carved from wood and handpainted to provide a piece you’ll love.

Sail again with the crew of the USS Santa Fe SSN-763 in this handcrafted wooden submarine model. Each piece is carved from wood and handpainted to provide a piece you’ll love.

USS Santa Fe (SSN-763), a Los Angeles-class submarine, is the second ship of the United States Navy to be named for Santa Fe, New Mexico. The contract to build her was awarded to the Electric Boat Division of General Dynamics Corporation in Groton, Connecticut on 21 March 1986 and her keel was laid down on 9 July 1991. She was launched on 12 December 1992 sponsored by Mrs. Joy Johnson, and commissioned on 8 January 1994, with Commander Rodger P. Krull in command.

A portside bow view of the fore section of Santa Fe tied up at the pier in February 1994. The doors of the Mark 36 vertical launch system for the Tomahawk missiles are in the “open” position.
Santa Fe deployed to the Western Pacific in September 2003 until March 2004. For this deployment she participated in ANNUALEX ’03 with the Japanese Maritime Defense Force. The ship made port calls in Singapore, Guam, multiple times in Sasebo, Japan, and in Yokosuka, Japan in which she rode out a typhoon while in port. Santa Fe was awarded the Navy Unit Commendation, the second highest award given to a submarine, for actions completed on this deployment. She underwent a three-month Interim drydocking in October 2004.

After the ship completed sea trials and other various workups she then completed a two-month Eastern Pacific Deployment that started in May 2005. After returning to her homeport of Pearl Harbor in June 2005, she again deployed to the Western Pacific on 9 August 2005. During this deployment she participated in Exercise Malabar with the Indian Navy. Santa Fe was the second U.S. nuclear submarine to participate in the exercise and also to port in Goa, India. After Malabar, the ship made a brief stop in Phuket, Thailand. She was the first U.S. submarine to visit Phuket since 2001. The ship returned to Pearl Harbor in February 2006. She made the transit to the East Coast in July 2006, surfacing near the North Pole on the way and stopping in Brest, France.

USS Santa Fe completed a major repair period lasting 18 months at the Portsmouth Naval Shipyard in Kittery, Maine.[citation needed] After undergoing sea trials at Naval Submarine Base Kings Bay, Georgia and transiting through the Panama Canal, she has returned to her homeport of Pearl Harbor, HI.

After shipyard she completed a six-month Western Pacific deployment from May–November 2009, after stops in Singapore, Saipan, Guam, Okinawa, JP, and Yokosuka, JP. She received the Battle “E” Award in January 2010. 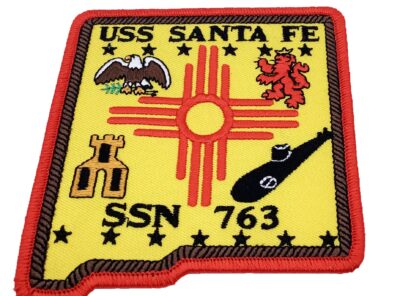