USS Sam Rayburn (SSBN-635) was a James Madison-class fleet ballistic missile submarine named for Sam Rayburn (1882–1961), Speaker of the United States House of Representatives (1940–1947, 1949–1953, and 1955–1961). Sam Rayburn was in commission 2 December 1964 to 31 July 1989 carrying the Polaris missile and later the Poseidon missile. Following decommissioning, ex-Sam Rayburn was converted into a moored training ship for use at the Naval Nuclear Prototype Training Unit at Goose Creek, South Carolina.

Construction and commissioning
The contract to build Sam Rayburn was awarded to Newport News Shipbuilding and Dry Dock Company in Newport News, Virginia on 20 July 1961 and her keel was laid down there on 3 December 1962. She was launched on 20 December 1963, sponsored by Mrs. S. E. Bartley and Mrs. W. A. Thomas, and commissioned on 2 December 1964, with Captain Oliver H. Perry, Jr., in command of the Blue Crew and Commander William A. Williams III in command of the Gold Crew.

During 1969, Sam Rayburn operated continuously with Submarine Squadron 18 until commencing overhaul at Portsmouth Naval Shipyard at Kittery, Maine, in December 1969. Upon completion of overhaul on 27 May 1971, she operated along the United States East Coast for the remainder of 1971 and into 1972.

On 10 June 1985, the U.S. Navy announced plans to dismantle a fleet ballistic missile submarine so as to remain within the SALT II strategic arms limitation treaty ceiling on MIRVed ballistic missiles. Sam Rayburn was selected and was deactivated on 16 September 1985, with missile tubes filled with concrete and tube hatches removed.[2] Her missile compartment was later dismantled and the two halves (bow and stern) of the ship were pulled together and welded in place for use as a training ship.

Sam Rayburn was decommissioned on 31 July 1989 and reclassified a moored training ship (MTS) with hull number MTS-635.[3][4] Struck from the Naval Vessel Register on 31 July 1989,[5] she arrived at the Naval Nuclear Prototype Training Unit at Goose Creek, South Carolina, in August 1989 after achieving initial criticality in her new role on 29 July 1989.[citation needed] Her modifications included special mooring arrangements, including Water Brake, a mechanism to absorb power generated by her main propulsion shaft.[citation needed] She is scheduled to operate as a moored training ship until 2020 while undergoing shipyard availabilities for repairs and alterations at five-year intervals. 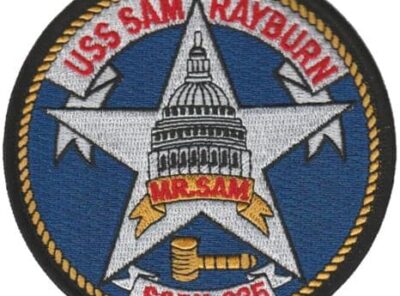