Sail again with the crew of the USS Olympia (SSN-717) FLT I in this handcrafted wooden submarine model. Each piece is carved from wood and handpainted to provide a piece you’ll love.

Etymology
Olympia is the second ship of the U.S. Navy to be named for Olympia, Washington.

History
The contract to build her was awarded to Newport News Shipbuilding and Dry Dock Company in Newport News, Virginia on 15 September 1977 and her keel was laid down on 31 March 1981. She was launched on 30 April 1983 sponsored by Mrs. Dorothy Williams, and commissioned on 17 November 1984.[3]

Olympia was assigned to Submarine Squadron 7 (SUBRON SEVEN) and was homeported in Pearl Harbor, Hawaii.

In 1998, Olympia became the first Pacific-based submarine to pass through the Suez Canal in over 35 years.

Olympia arrived in Bremerton, WA, on Thursday, October 31, 2019, for decommissioning after completing a final circumnavigation. Like all other recent U.S. submarines, the vessel will be recycled via the Navy’s Ship-Submarine Recycling Program. 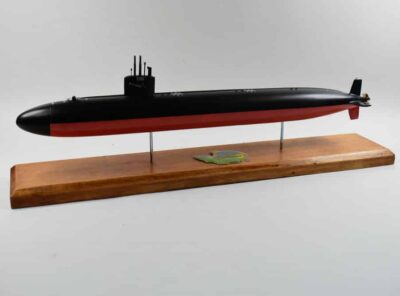