Dive with the USS Missouri (SSN-780) Submarine Model again in this handcrafted 20-inch submarine. Each piece is carved from wood and handpainted to provide a piece you’ll love.

USS Missouri (SSN-780) is the seventh Virginia-class attack submarine and the fourth ship in the United States Navy named in honor of the U.S. state of Missouri. She was completed, and delivered, nine months early and under budget.

History
The contract to build Missouri was awarded to the Electric Boat Division of General Dynamics Corporation in Groton, Connecticut on 14 August 2003. Her keel was laid down on 27 September 2008.[1] The submarine was put in the water on 20 November 2009, and christened on 5 December 2009. Missouri’s sponsor is Becky Gates, wife of Secretary of Defense Robert Gates.

Rebecca Gates christens Missouri at General Dynamics Electric Boat in Groton, Connecticut
Missouri was commissioned on 31 July 2010. Her first assignment is with Submarine Squadron 4 (SUBRON 4) based at US Naval Submarine Base New London, Groton, CT.

Missouri completed her first 6-month deployment to the U.S. 6th Fleet on 20 December 2013. In March 2014 Missouri made an 11-week-long surge deployment in the Northern Atlantic, just three months after her previous deployment[8] and possibly linked to the Ukrainian crisis, (i.e. the Annexation of Crimea by the Russian Federation, which took place in March 2014). The submarine continued to operate with the U.S. 6th fleet in 2015.

On 26 January 2018, Missouri sailed into her new homeport of Pearl Harbor, Hawaii from Groton, Connecticut. 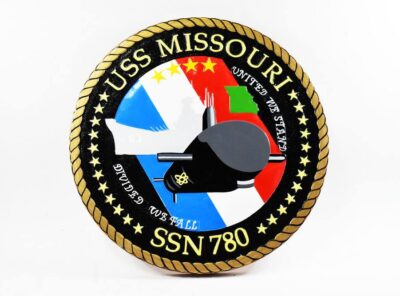