Sail again with the crew of the USS Mariano G. Vallejo SSBN-658 in this handcrafted wooden submarine model. Each piece is carved from wood and handpainted to provide a piece you’ll love.

Construction and commissioning
The contract to build Mariano G. Vallejo was awarded to Mare Island Naval Shipyard at Vallejo, California, on 8 August 1963 and her keel was laid down there on 7 July 1964. She was launched on 23 October 1965, sponsored by Miss Patricia O. V. McGettigan, and commissioned on 16 December 1966, with Commander Douglas B. Guthe commanding the Blue Crew and Commander John K. Nunneley commanding the Gold Crew.

Service history
Mariano G. Vallejo conducted shakedown and training exercises along the United States West Coast, in the Caribbean Sea, and off the coast of Florida. Transiting the Panama Canal for the second time on 21 March 1967, she headed for her assigned home port, Pearl Harbor, Hawaii. Arriving there on 10 April 1967, she continued training exercises and sound trials, then returned briefly to Mare Island Naval Shipyard. From there she sailed back to Pearl Harbor, becoming, as of 1 August 1967, a fully operational unit of Submarine Squadron 15, ready to conduct strategic deterrent patrols.

Mariano G. Vallejo was the last to patrol, last to off-load her missiles and the last to arrive in Washington making her the last of the “Forty-one for Freedom.” On 2 August 1994, the submarine left Charleston for the last time. She arrived at the Panama Canal on 10 August and during the voyage to San Diego transited 20 nautical miles (37 km) from the epicenter of a 7.2 earthquake. In port at the Mare Island shipyard the crew hosted over three thousand tours of the ship in eleven days.

Decommissioning and disposal
Mariano G. Vallejo was both decommissioned and stricken from the Naval Vessel Register on 9 March 1995. Her scrapping via the U.S. Navy’s Nuclear-Powered Ship and Submarine Recycling Program at Bremerton, Washington, began on 1 October 1994 and was completed on 22 December 1995. 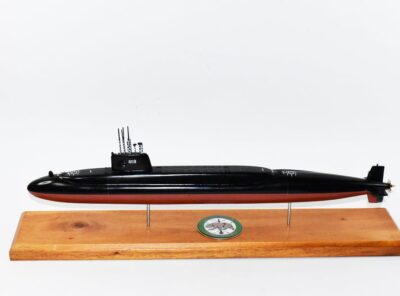 Sail again with the crew of the USS Mariano G. Vallejo SSBN-658 in this handcrafted wooden submarine model. Each piece is carved from wood and handpainted to provide a piece you’ll love.