Sail again on the USS Henry Jackson in this hand crafted 20 inch wooden submarine model. Each piece is carved from wood and hand-painted to provide a piece you’ll love.

USS Henry M. Jackson (SSBN-730), is a United States Navy Ohio-class ballistic missile submarine that has been in commission since 1984. She is the only U.S. Navy ship to have been named for United States Senator Henry M. “Scoop” Jackson (1912–1983) of Washington and the only Ohio-class submarine not named after a U.S. state. 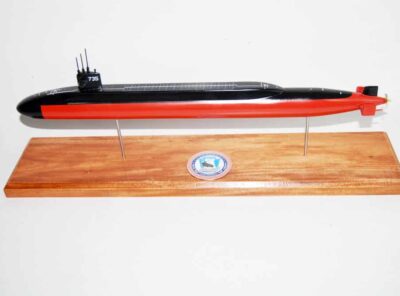 SSGN-727 USS Michigan Submarine Model Sail with the crew of the USS Michigan (SSGN-727) in this handcrafted 20-inch wood submarine. Each piece is carved from wood and hand-painted to provide a piece you’ll love. Length – 20 inches USS Michigan … Read More