Fly off of the USS Hancock CVA-19 Aircraft Carrier Model in this handcrafted wooden model. Each model is carved from wood and handcrafted to provide a piece you’ll love.

USS Hancock (CV/CVA-19) was one of 24 Essex-class aircraft carriers built during World War II for the United States Navy. The ship was the fourth US Navy ship to bear the name, and was named for John Hancock, president of the Second Continental Congress and first governor of the Commonwealth of Massachusetts.[Note 1] Hancock was commissioned in April 1944, and served in several campaigns in the Pacific Theater of Operations, earning four battle stars. Decommissioned shortly after the end of the war, she was modernized and recommissioned in the early 1950s as an attack carrier (CVA). In her second career she operated exclusively in the Pacific, playing a prominent role in the Vietnam War, for which she earned a Navy Unit Commendation. She was the first US Navy carrier to have steam catapults installed.

She was decommissioned in early 1976, and sold for scrap later that year.

Construction and commissioning
The ship was laid down as Ticonderoga on 26 January 1943 by Bethlehem Steel Co., Quincy, Massachusetts It was renamed Hancock 1 May 1943 in response to an offer from the John Hancock life insurance company to conduct a special bond drive to raise money for the ship if that name was used. (The shipyard at Quincy was in the company’s home state.) CV-14, laid down as Hancock and under construction at the same time in Newport News, Virginia, took the name Ticonderoga instead.

The company’s bond drive raised enough money to both build the ship and operate it for the first year.[5] The ship was launched 24 January 1944 by Mrs. Juanita Gabriel-Ramsey, the wife of Rear Admiral DeWitt Clinton Ramsey, Chief of the Bureau of Aeronautics.[6][7] Hancock was commissioned 15 April 1944, with Captain Fred C. Dickey in command. 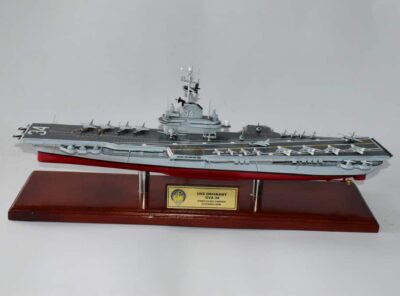 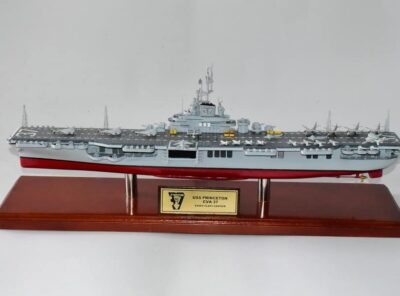 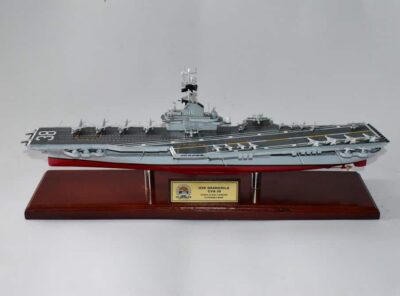 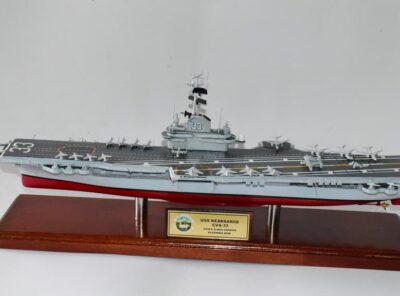