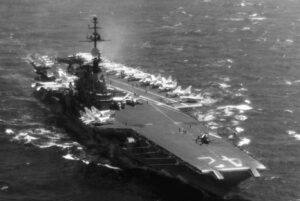 The USS Franklin D. Roosevelt CVA-42 was an aircraft carrier that saw service during World War II, Korea, and Vietnam before being decommissioned in 1977 after nearly 40 years of service!  She was the second of three Midway-class carriers to serve in World War II, and her crew knew her as “Swanky Franky,” or simply just “Rosie.”

Franklin D. Roosevelt was laid down at New York Naval Shipyard on 1 December 1943. Sponsor Mrs. John H. Towers, the wife of the Deputy Commander-in-Chief, Pacific Fleet, christened the ship Coral Sea at the 29 April 1945 launching. On 8 May 1945, President Harry S. Truman approved the Secretary of the Navy’s recommendation to rename the ship, Franklin D. Roosevelt, in honor of the late president, who had died four weeks earlier.

Roosevelt was reclassified CVA-42 on 1 October 1952. On 7 January 1954, she sailed for Puget Sound Naval Shipyard to undergo extensive reconstruction. Too large to pass through the Panama Canal, Roosevelt rounded Cape Horn and arrived at the shipyard on 5 March 1954. She was temporarily decommissioned there for her refit on 23 April 1954.

By the late 1970s, Roosevelt was in poor material condition. Deprived of the upgrades that Midway and the Coral Sea had received, Roosevelt was the least modern and least capable of the class. Furthermore, Roosevelt used General Electric turbines, which gave persistent problems and reduced speed compared to the Westinghouse units used on the other ships. The Navy, therefore, chose to decommission Roosevelt when the second Nimitz-class carrier, Dwight D. Eisenhower, entered service in 1977. 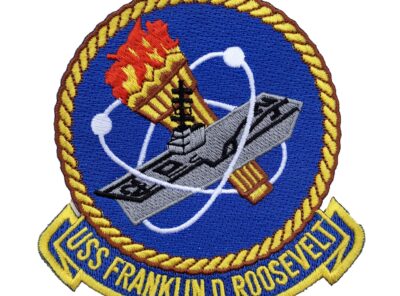