Sail again with the crew of the USS Asheville SSN-758 in this handcrafted wooden submarine model. Each piece is carved from wood and handpainted to provide a piece you’ll love.

USS Asheville (SSN-758), is a Los Angeles-class, nuclear powered fast attack submarine. She is the fourth vessel of the United States Navy to be named for Asheville, North Carolina. The contract to build her was awarded to Newport News Shipbuilding and Dry Dock Company in Newport News, Virginia on 26 November 1984 and her keel was laid down on 9 January 1987. She was launched on 24 February 1990, sponsored by Mrs. Dorothy Helms, and commissioned on 28 September 1991.

Asheville was fitted with a developmental Advanced Mine Detection System (AMDS) high-frequency active sonar array with transmitters and receivers in the sail and in a disc-shaped chin sonar dome beneath the hull at the bow. The system is used for target detection, mine avoidance, and bottom navigation. After a highly successful testing period the system was removed during overhaul in 2003. 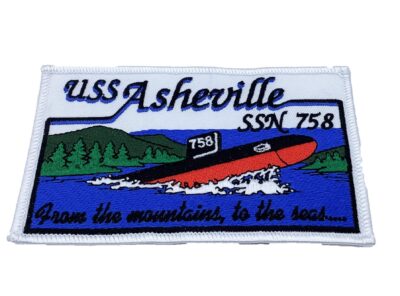