Dive again with your shipmates in this USS Andrew Jackson SSBN-619 Submarine Model. Each piece is carved from wood and hand painted to provide a piece you’ll love.

Construction and commissioning
The contract to build Andrew Jackson was awarded to Mare Island Naval Shipyard at Vallejo, California, on 23 July 1960 and her keel was laid down on 26 April 1961. She was launched on 15 September 1962 sponsored by Mrs. Estes Kefauver, and commissioned on 3 July 1963, with Commander Alfred J. Whittle, Jr. in command of the Blue Crew and Commander James B. Wilson in command of the Gold Crew.[2]

Following commissioning, Andrew Jackson sailed via the Panama Canal to the United States East Coast. On 1 October and 11 October 1963, during shakedown training out of Cape Canaveral, Florida, she successfully launched Polaris A-2 ballistic missiles; and, on 26 October 1963, she sent Polaris A-3X missiles into space in the first submerged launching of its type; and she repeated the feat on 11 November 1963. On 16 November 1963, six days before his assassination, President John F. Kennedy—embarked in the missile range instrumentation ship USS Observation Island—observed Andrew Jackson launch another Polaris A-2 ballistic missile from a point off Cape Canaveral and congratulated Commander Wilson and his crew for “impressive teamwork.”[2] 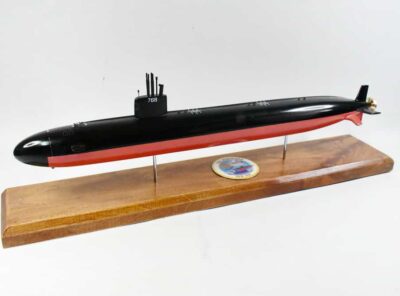 USS Hartford SSN-768 Submarine Dive with the USS Hartford again in this handcrafted 20-inch submarine. Each piece is carved from wood and handpainted to provide a piece you’ll love. USS Hartford (SSN-768), a Los Angeles-class submarine, is the second ship … Read More