Fly with the Strategic Air Command in this hand crafted B-36 Peacemaker model. Each piece is carefully carved from wood to provide a piece you’ll love.

Convair B-36s awaiting their fate at the 3040th Aircraft Storage Depot (now 309th Aerospace Maintenance and Regeneration Group) in 1958
With the appearance of the excellent Soviet Mikoyan-Gurevich MiG-15 in combat over North Korea in 1950, USAF propeller-driven bombers were rendered obsolete as strategic offensive weapons. During daylight, the MiG-15 could, and did, attack the propeller-driven B-29s, forcing the U.S. to switch the B-29 to night raids.[citation needed] The B-36, along with the B-29/B-50 Superfortresses in the USAF inventory in the early 1950s, were all designed during World War II prior to the jet age. It would take a new generation of swept-wing jet bombers, able to fly higher and faster, to effectively overcome defense by MiG-15 or subsequent Soviet-designed interceptors if the Cold War escalated into an armed conflict between the United States and Soviet Union.[citation needed] With the end of fighting in Korea, President Eisenhower, who had taken office in January 1953, called for a “new look” at national defense. His administration chose to invest in the Air Force, especially Strategic Air Command. The Air Force retired nearly all of its B-29/B-50s, to be replaced by the new Boeing B-47 Stratojet. By 1955, the swept wing Boeing B-52 Stratofortress was entering the inventory in substantial numbers, replacing B-36s.[citation needed] The two main factors contributing to the obsolescence of the B-36 and leading to its phaseout[citation needed] were:
The Peacemaker was not designed for aerial refueling, and required intermediate refueling bases to reach its planned targets deep in the Soviet Union.[citation needed] Its slow speed made it vulnerable to Soviet jet interceptor aircraft, making long-range bombardment flights over Soviet territory extremely hazardous, seriously compromising its ability to reach its planned target and return.[citation needed] The scrapping of B-36s began in February 1956. Once replaced by B-52s, they were flown directly from operational squadrons to Davis-Monthan AFB, Arizona, where the Mar-Pak Corporation handled their reclamation and destruction. Defense cutbacks in FY 1958 compelled the B-52 procurement process to be stretched out and the B-36 service life to be extended. The B-36s remaining in service were supported with components scavenged from aircraft sent to Davis-Monthan. Further update work was undertaken by Convair at San Diego (Specialized Aircraft Maintenance, SAM-SAC) until 1957 to extend the life and capabilities of the B-36s. By December 1958 only 22 B-36Js were still operational.[53] On 12 February 1959, the last B-36J built, AF Ser. No. 52-2827, left Biggs AFB, Texas, where it had been on duty with the 95th Heavy Bombardment Wing, and was flown to Amon Carter Field in Fort Worth, where it was put on display. Within two years, all B-36s, except five used for museum display, had been scrapped at Davis-Monthan AFB.[53] 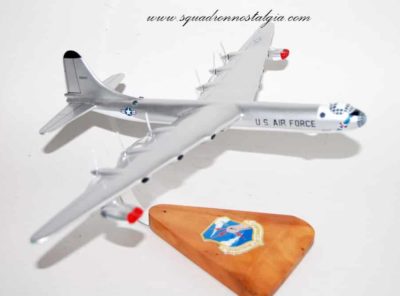 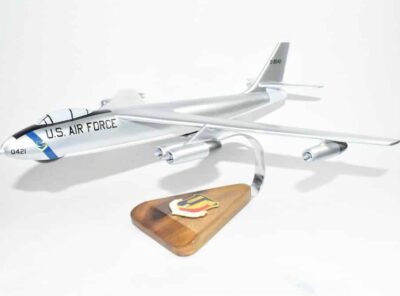 B-47 Stratojet 376th Bomb Wing Model Fly with SAC and the 376th Bomb Wing in this handcrafted B-47 model. Each piece is carved from wood and hand painted to provide a piece you’ll love. Length – 18 inches The B-47 … Read More