Recreate what is what like to fly with the RVAH-12 Speartips in this RA-5c Vigilante Model Airplane.  You’ll be proud to display this piece of craftsmanship.  The model is carefully crafted from wood and then hand painted.   Length ~ 18 inches.

Reconnaissance Attack Squadron TWELVE (RVAH-12) was commissioned
on 1 July 1965 at Naval Air Station, Sanford, Florida.
It was the first unit ever commissioned as a Reconnaissance
Attack Squadron from its inception. From the beginning, the
Squadron’s call sign has.been “SPEARTIP” and the Squadron
insignia symbolizes the call sign with a SPEARTIP climbing
into a clear blue sky at supersonic speed. The Squadron’s

motto is We Point the Way.”.
The SPEARTIP’s sea-going history began in November 1965
when a small contingent of the Squadron moved aboard the USS
SARATOGA (CVA-60) for carrier qualifications. On 11 March
1966, the full Squadron departed Mayport, Florida, as part of
Attack Carrier Air Wing ”ITREE in SARATOGA bound for the Mediterranean.
On 25 October 1966, the SPEARTIPS returned to
Naval Air Station, Sanford, Florida, after a seven month deployment,
during which the Squadron won the Attack Carrier Air
Wing THREE “Golden Tail Hook Award” for outstanding carrier
landing performance.

The Squadron immediately began a new training cycle and
turned its sights west in preparation for its second deployment
and first combat experience. On 28 March 1967, RVAH-12
departed. San Diego, California, with Attack Carrier Air Wing
FOURTEEN in USS CONSTELLATION (CVA-64). After a shakedown
and Operational Readiness Exercise, the SPEARTIPS.arrived on
Yankee Station off the coast of North Vietnam on 28 May 1967.
From then until 12 November 1967, RVAH-12 was the only
Reconnaissance Attack Squadron on Yankee Station. By the end
of the first month, the SPEARTIPS were pioneering new methods
and camera configurations for the Vietnam combat environment.
On 25 November, the ship and her air wing departed for home,
arriving in San Diego on 4 December 1967.
RVAH-12, as a unit of .Reconnaissance Attack Wing ONE,
moved from NAS Sanford, Florida to Naval Air Station, Albany,
Georgia, in the Spring of 1968. On 9 June of that year, the
Squadron deployed to the Mediterranean in USS FORRESTAL (CVA-59)
with Attack Carrier Air Wing SEVENTEEN. The ,squadron returned
to NAS Albany on 28 April 1969.

The training cycle that followed was shortened by the
Squadron’s assignment to the NATO exercise “PEACEKEEPER.”
The exercise, conducted between 26 August and 10 October 1969,•
joined RVAH-12 with Attack Carrier Air Wing SEVEN in USS
INDEPENDENCE (CVA-62). The Squadron returned to NAS Albany
to begin preparations for a second combat deployment to the
Western Pacific in early 1970. Initial fleet exercises for
that deployment were conducted in the Caribbean in USS AMERICA
(CVA- 66) between 25 January and 1 March 1970. The Squadron
deployed on 7 April for an eight month tour in USS AMERICA to
Southeast Asia. After an absence of 258 days, the Squadron
returned to Albany on 21 December.
Until June 1971 the Squadron operated at NAS Albany in
preparation for a Mediterranean deployment with Attack Carrier
Air Wing SEVEN. In July 1971 the Squadron and Air ing Operated

from USS INDEPENDENCE (CVA-62) off the Virginia Capes and
over the Jacksonville operating area. The four aircraft and
200 men returned to NAS Albany in August 1971 for additional
shore-based reconnaissance training prior to the long deployment.

RVAH-12 departed Norfolk, Virginia in USS INDEPENDENCE
(CVA-62) on 16 September 1971 to participate – in the NATO exercise
“ROYAL KNIGHT” in the Norwegian Sea during which the
Squadron operated above 70 degrees north latitude. During
the deployment, the Squadron participated in Exercise “MAGIC
SWORD IV,” “NATIONAL WEEK XI,” “QUICK DRAW,” and “MAGIC SWORD
V.”
On 16 March 1972, the SPEARTIPS returned to Naval Air
Station, Albany, Georgia, to commence training in preparation
for a Western Pacific deployment in USS CONSTELLATION (CVA-64).
The Squadron completed refreshers and ORE in December.
The SPEARTIPS then left San Diego on 5 January 1973 for
the Western Pacific. Although this deployment marked the end
of the Vietnam War, RVAH-l2 was heavily tasked to provide
crash site photography in an effort to verify MIA status.
The Squadron returned to CONUS on 11 October 1973’and commenced
preparations for return to the Western Pabific aboard
USS ENTERPRISE (CVAN-65).
On 15 January 1974, Reconnaissance Attack Squadron TWELVE,
as a unit of Reconnaissance Attack Wing ONE, moved to its new
homeport at Naval Air Station, Key West, Florida. On 17
September 1974, RVAH-12 departed San Francisco in USS ENTERPRISE
for another cruise to.the Western Pacific. While on
the cruise, RVAH-12 participated in 7.3AYANIHAN, a combined.
Philippine and U. S. Forces exercise.
On 12 January 1975, the ENTERPRISE entered the Indian
Ocean for five weeks of routine operations. While in the
Indian Ocean, the ENTERPRISE was diverted to Port Louis,
Mauritius, to provide disaster relief for victims of tropical
cyclone GERVAISE.
At the conclusion of an inport at Subic Bay, the USS
ENTERPRISE (CVAN-65) proceeded to South Vietnam where it and
RVAH-12 participated. in operation “FREQUENT WIND,”, the evacuation
of that country. Following the successful completion
of that operation, the ENTERPRISE was relieved. on station and
then returned to the continental United States. The Squadron
arrived in-Key West, Florida, on 20 May 1975.
After completing its post-cruise standdown, the Squadron
commenced its training cycle to prepare for a Bicentennial/
Northern European curise aboard USS FORRESTAL (CV-59) as a
member of Attack Carrier Air Wing SEVENTEEN. In February 1976,
RVAH-12,-along with the Air Wing, participated in a weapons
exercise at Naval Air _Station, Fallon, Nevada. From March
through June 1976, the Squadron completed buildups with Carrier
Air Wing SEVENTEEN and USS FORRESTAL operating along the
U. S. Eastern Coast and in the Caribbean. 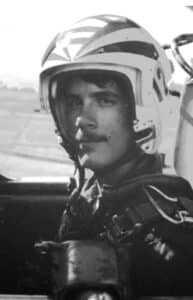 In July, RVAH-12 in USS FORRESTAL commenced a Bicentennial
cruise participating in OPSAIL 76 on the Nation’s 200th birthday
in New York Harbor. Readiness exercises followed with
USS FORRESTAL until October 1976 when’ the Squadron was transferred
to Carrier Air Wing SEVEN and was cross decked to the
USS INDEPENDENCE (CV-62). From November 1976 through February
1977,.the SPEARTIPS.completed their second buildups of the
year conducting ORE and another Caribbean exercise with USS
.INDEPENDENCE.
On 31 March 1977, RVAH-12 departed Norfolk, Virginia, commencing
a Mediterranean deployment with USS INDEPENDENCE.
During one period of the cruise, the Squadron attained a remarkable
achievement completing sixty consecutive sorties
without a maintenance related cancellation. During the last
six weeks of the cruise, the Squadrom operated a detachment
at Naval Station,-Rota, Spain, in support of operation “SWING
WING.”
On 21 October 1977, USS INDEPENDENCE reentered Norfolk
harbor, and the Squadron returned to NAS Key West marking the
end of a very successful deployment. Following a turnaround
cycle which included two .special detachments to Naval Station,
Roosevelt Roads, Puerto Rico, the Squadron prepared for a
deployment to the Mediterranean Sea.
In Spetember 1978, the Squadron deployed to Naval Station,
Rota, Spain, in support of CVW-3 and the USS SARATOGA (CV-60).
While deployed, the Squadron maintained a detachment aboard
the SARATOGA and sent two detachments to Naval Air Facility,
Sigonella, Italy, in support of special tasking requirements.
The Squadron returned to Naval Air Station, Key West on

7 February 1979, marking the end of the last RA-5C Mediterranean
deployment. The Squadron remained on an alert status
until the return of the USS SARATOGA to the United States.
In June 1979, two of the Squadrons RA-5C Vigilante aircraft
were flown to the Naval Weapons Center, China Lake, California,
and one was flown to the Naval Air Test Center, Patuxent River,
Maryland. With the completion of this fly off, the Squadron
has acquired over six years and 6,895 accident free flight
hours, and was the receipient of the 1978 CNO Safety Award.
On 2 July 1979, Reconnaissance Attack Squadron TWELVE was
disestablished, marking the end of an era.

12 inch model of the T-34C of the VT-3 Red Knights- a first for many a Naval Aviator. Makes the perfect gift post solo! *Pictures shown may or may not be exact model shipped.  Order custom if specific BUNO is … Read More