Fly off the USS Kitty Hawk again in this RA-5c model of the RVAH-11 Checkertails. Each model is carefully carved from wood and painted to provide a unique piece of art you’ll be proud to show off.

Heavy Attack Squadron ELEVEN (VAH-11) was formed on
1 November 1955 from Composite Squadron EIGHT (CV-8). The
Squadron operated twelve North American Savage (AJ-1) Attack
Bombers.
From October 1956 until February 1957, three VAH-11 Detachments
were deployed in the Mediterranean; two operating aboard
carriers, the third based at NAF Port Lyautey, French Morocco.
In November 1957, VAH-11 received the first of its complement
of A-3B “SKYWARRIORS.” It was clear in this period of
transition that the nickname of the “CHECKERTAILS” was born.
The CHECKERTAILS were assigned to Air Group ONE and on 13
February 1959 deployed on the USS ROOSEVELT to the Mediterranean.
The Squadron returned to the continental United States
in September 1959, and was selected to represent Heavy Attack
Wing ONE at the All Navy Weapons Meet.
Early in 1960, the Squadron was again deployed onboard the
USS ROOSEVELT with the SIXTH Fleet. During the seven month
period in the Mediterranean the Squadron, with seven aircraft,
flew as many hours . as previously deployed squadrons did with
twelve. CHECKERTAIL flight crews showed their proficiency by
earning a total of 49 out of a•possible 52 coveted Navy “E”‘s
for bombing and navigation excellence.
On 15 February 1961, VAH-11 deployed for the Mediterranean
aboard the USS FRANKLIN D. ROOSEVELT.
Continuing in its tradition of excellence, Heavy Attack
Squadron ELEVEN was named the Heavy Attack Wing ONE top bombing
squadron for fiscal year 1962.
On 6 August 1962, the Squadron was divided into two units.
The major portion, which continued to be designated Heavy Attack
Squadron ELEVEN, deployed to the Mediterranean with six “SKYWARRIORS”
aboard the USS ROOSEVELT from 14 September 1962 until
22 April 1963. The other part of the Squadron, officially
known as Heavy Attack Squadron ELEVEN, Detachment EIGHT, remained
at NAS Sanford, Florida. There they were assigned the responsibility
of meeting all HATWING ONE’s SECOND Fleet operational
commitments during the period when other squadrons were transitioning
to a new aircraft, the A-5A Vigilante.
In October, HATRON ELEVEN was presented the Navy “E.”
Receipt of this coveted award was a fitting climax to a year
of intensive operations, recognizing the Squadron’s exceptionally
high state of operational readiness and efficiency.

:ATRON ELEVEN deployed to Mediterranean with the SIXTH
Fleet on 23 April 1964. This was the Squadron’s Sixth Mediterranean
deployment. In August 1964, VAH-11 received the Navy “E”
for the second consecutive year.
In October, the Squadron achieved another first when VAH-11
Detachment EIGHT relieved VAH-11 in the Mediterranean. This
occurred when the USS ROOSEVELT, with VAH-11 onboard, returned
to CONUS for emergency repairs and was relieved by the USS
INDEPENDENCE with VAH-11 Detachment EIGHT embarked.
Both units of the Squadron completed deployments in December
1964, and on 4 January 1565, Detachment EIGHT was disestablished
and again became a part of VAH-11. During its existence, Detachment
EIGHT was designated by Heavy Attack Wing ONE as the top
bombing squadron of 1964.
During the Spring of 1965, VAH-11 completed an Operational
Readiness Inspection with Air Group ONE and competed in the
bombing derby in which it won every event in which the A-3 was
capable of competing against the newer A-5A. VAH-il was
assigned to Carrier Air Wing EIGHT and departed onboard the
USS FORRESTAL on 24 August 1965 for another deployment in the
Mediterranean.
The Squadron returnedto NAS Sanford, Florida, on 7 April
1966 and began transitioning to the RA-5C aircraft and training
to assume a new mission as a Reconnaissance Attack. Squadron.
In January 1967, RVAH-11, now fully combat ready,’became a member
of the,.USS FORRESTAL/CVW-11 fighting team. After two,
three-week training cycles in March and April at the Atlantic
Fleet Weapons Range off the coast of Puerto Rico, the Squadron
departed Norfolk, Virginia, on 6 June 1967 for its first combat
cruise. On 29 July 1967 at 1052 hours, a tragic fire ravaged
USS FORRESTAL, then operating in the Gulf of Tonkin, killing
132 men and forcing the ship out of action and back to Norfolk
for repairs. Three Squadron aircraft were’destroyed in the
fire and two more were extensively damaged by salt water. No
CHECKERTAIL personnel fatalities were incurred.
While others onboard the USS FORRESTAL could look forward
to some well deserved rest following their ordeal, the CHECKERTAILS
started preparing for an immediate re-outfitting and
return to Southeast Asia. Arriving home at NAS Sanford,
Florida, on 12 September 1967, the Squadron spent the’next three
weeks completely re-outfitting in preparation to return to sea,
and on 6 October departed Sanford to join Carrier Air Wing
ELEVEN and the USS KITTY HAWK in San Diego, California. Three
weeks operating off the coast of San Diego, two weeks back
home at NAS Sanford, Florida, and the Squadron was ready. 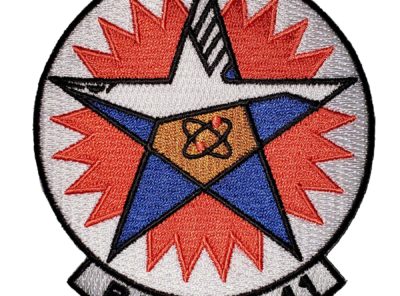 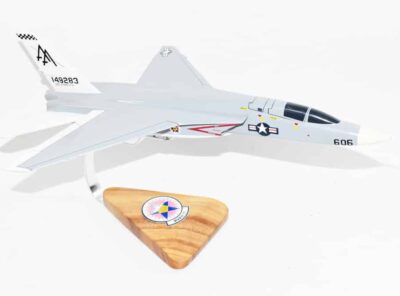 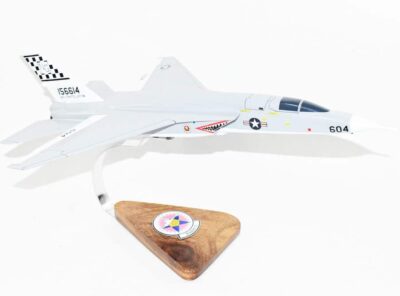 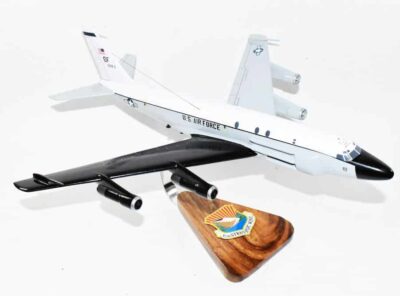 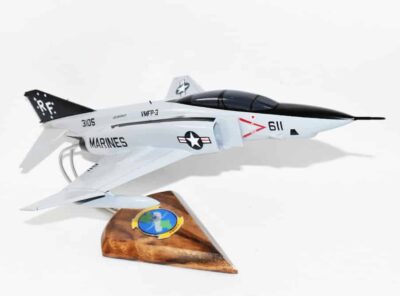 VMFP-3 Eyes of the Corps RF-4b Model Fly with the Eyes of the Corps of VMFP-3 in this handcrafted RF-4b model. Each model is carefully carved from wood and hand painted to provide a piece you’ll love! VMFP-3 was activated … Read More 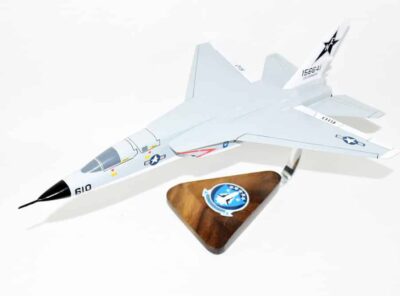 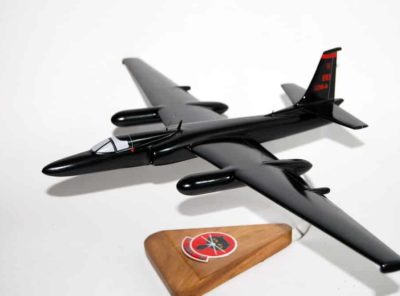 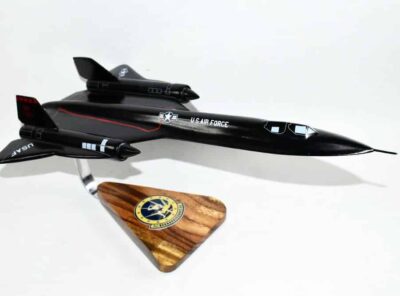 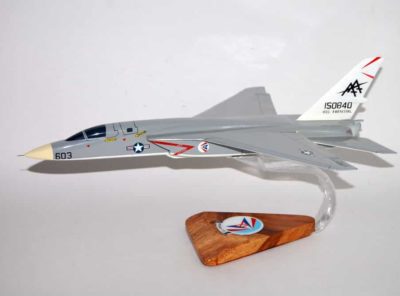 RVAH-12 Speartips RA-5c (1967) Model Recreate what is what like to fly with the RVAH-12 Speartips in this RA-5c Vigilante Model Airplane.  You’ll be proud to display this piece of craftsmanship.  The model is carefully crafted from wood and then … Read More 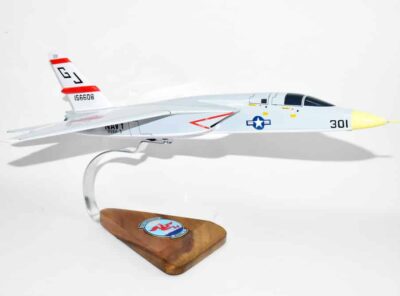 RVAH-3 Sea Dragons RA-5c Model Fly with the RVAH-3 Sea Dragons again with this 18 inch wood model that has been carefully carved and hand painted to provide a unique memory of this great squadron and jet! Length- 18 inches … Read More 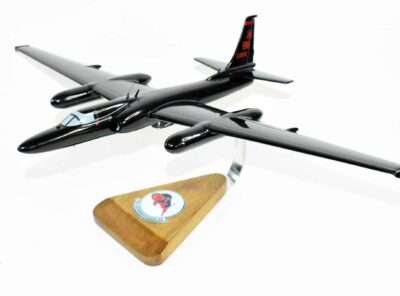