Fly with the North American F-86 Model. Each piece is carved from wood and hand painted to provide a piece you’ll love.

The North American F-86 Sabre, sometimes called the Sabrejet, is a transonic jet fighter aircraft. Produced by North American Aviation, the Sabre is best known as the United States’ first swept wing fighter that could counter the swept-wing Soviet MiG-15 in high-speed dogfights in the skies of the Korean War (1950–1953), fighting some of the earliest jet-to-jet battles in history. Considered one of the best and most important fighter aircraft in that war, the F-86 is also rated highly in comparison with fighters of other eras.[3] Although it was developed in the late 1940s and was outdated by the end of the 1950s, the Sabre proved versatile and adaptable and continued as a front-line fighter in numerous air forces until the last active operational examples were retired by the Bolivian Air Force in 1994.[citation needed]

Its success led to an extended production run of more than 7,800 aircraft between 1949 and 1956, in the United States, Japan, and Italy. Variants were built in Canada and Australia. The Canadair Sabre added another 1,815 airframes, and the significantly redesigned CAC Sabre (sometimes known as the Avon Sabre or CAC CA-27), had a production run of 112. The Sabre is by far the most-produced Western jet fighter, with total production of all variants at 9,860 units

Development
North American Aviation had produced the propeller-powered P-51 Mustang in World War II, which saw combat against some of the first operational jet fighters. By late 1944, North American proposed its first jet fighter to the U.S. Navy, which became the FJ-1 Fury. It was an unexceptional transitional jet fighter that had a straight wing derived from the P-51.Initial proposals to meet a United States Army Air Forces (USAAF) requirement for a medium-range, single-seat, high-altitude jet-powered day escort fighter/fighter bomber were drafted in mid-1944.[6] In early 1945, North American Aviation submitted four designs.The USAAF selected one design over the others, and granted North American a contract to build three examples of the XP-86 (eXperimental Pursuit). Deleting specific requirements from the FJ-1 Fury, coupled with other modifications, allowed the XP-86 to be lighter and considerably faster than the Fury, with an estimated top speed of 582 mph (937 km/h), versus the Fury’s 547 mph (880 km/h).[6] Despite the gain in speed, early studies revealed the XP-86 would have the same performance as its rivals, the XP-80 and XP-84. It was also feared that, because these designs were more advanced in their development stages, the XP-86 would be canceled.

Crucially, the XP-86 would not be able to meet the required top speed of 600 mph (970 km/h); North American had to quickly devise a radical change that could leapfrog its rivals. The North American F-86 Sabre was the first American aircraft to take advantage of flight research data seized from the German aerodynamicists at the end of World War II.[8] This data showed that a thin swept wing could greatly reduce drag and delay compressibility problems that had bedeviled even prop-powered fighters such as the Lockheed P-38 Lightning approaching the speed of sound. By 1944, German engineers and designers had established the benefits of swept wings based on experimental designs dating back to 1940. Study of the data showed that a swept wing would solve their speed problem, while a slat on the wing’s leading edge that extended at low speeds would enhance low-speed stability.

Because development of the XP-86 had reached an advanced stage, the idea of changing the sweep of the wing was met with resistance from some senior North American staff. Despite stiff opposition, after good results were obtained in wind tunnel tests, the swept-wing concept was eventually adopted. Performance requirements were met by incorporating a 35° swept-back wing, using NACA 4-digit modified airfoils, using NACA 0009.5–64 at the root and NACA 0008.5–64 at the tip,[9] with an automatic slat design based on that of the Messerschmitt Me 262 and an electrically adjustable stabilizer, another feature of the Me 262A. Many Sabres had the “6–3 wing” (a fixed leading edge with 6 inches extended chord at the root and 3 inches extended chord at the tip) retrofitted after combat experience was gained in Korea. This modification changed the wing airfoils to the NACA 0009-64 mod at the root and the NACA 0008.1–64 mod at the tip.

The XP-86 prototype, which would lead to the F-86 Sabre, was rolled out on 8 August 1947. The first flight occurred on 1 October 1947 with George Welch at the controls,flying from Muroc Dry Lake (now Edwards AFB), California

The United States Air Force’s Strategic Air Command had F-86 Sabres in service from 1949 through 1950. The F-86s were assigned to the 22nd Bomb Wing, the 1st Fighter Wing and the 1st Fighter Interceptor Wing. The F-86 was the primary U.S. air combat fighter during the Korean War, with significant numbers of the first three production models seeing combat.

The F-86 Sabre was also produced under license by Canadair, Ltd as the Canadair Sabre. The final variant of the Canadian Sabre, the Mark 6, is generally rated as having the highest capabilities of any Sabre version 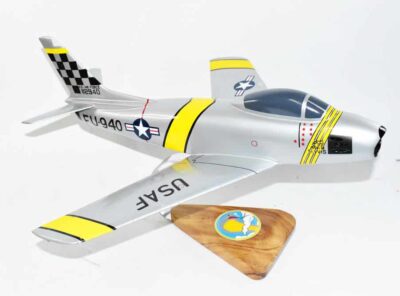 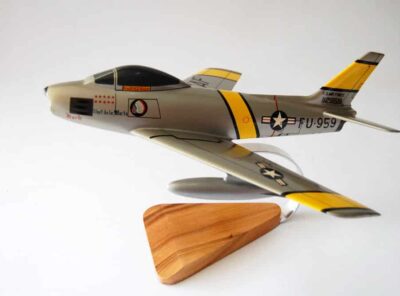 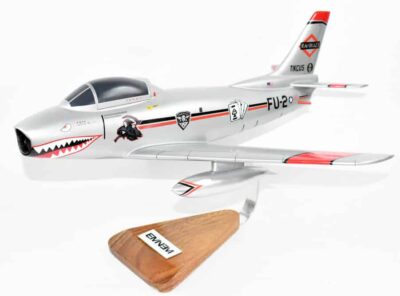