Fly again with the HSL-40 Airwolves in this SH-60B carved from Mahogany and carefully painted to provide a treasure piece of art for your family, office and goat locker.

The misson of Helicopter Anti-Submarine Squadron Light FOUR ZERO is grow Navy leaders and train fleet replacement pilots and aircrew to fight and win at sea.

Helicopter Anti-Submarine Squadron Light 40, based at Naval Station, Mayport, Florida, was established 4 October 1985 to serve Naval Station Mayport’s newly formed Helicopter Sea Control Wing THREE (now Helicopter Anti-Submarine Light Wing, U.S. Atlantic Fleet) operating the Navy’s newest ASW weapons system, the SH-60B “Seahawk.” HSL-40 is one of only two SH-60B Fleet Readiness Squadrons (FRS) in the world and trains pilots and aircrew of the U.S. Atlantic Fleet, along with foreign students from around the globe. The first pilot, aircrew, and maintenance personnel graduated in mid-1986, eventually reaching the numbers necessary to form four new fleet squadrons. The mission of HSL-40 is to provide quality training to fleet replacement pilots and aircrew so they may “fight and win at sea.”

Regardless of the curriculum, each student receives extensive classroom and hands-on training designed to prepare him or her for the challenge of serving on an operational SH-60B detachment aboard a small-deck warship at sea. In every theater of operations, in every climate, and in every projection of force, there will be Airwolves, past and future, ready to serve. 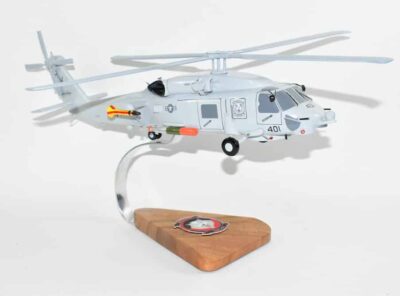 HSL-40 Airwolves (Fleet Grey) SH-60B Model Fly with the HSL-40 Airwolves in this handcrafted SH-60B Model.  Each piece is carved from wood and painted to provide a one of kind piece.   Our pieces seek to recreate memories of these glorious … Read More 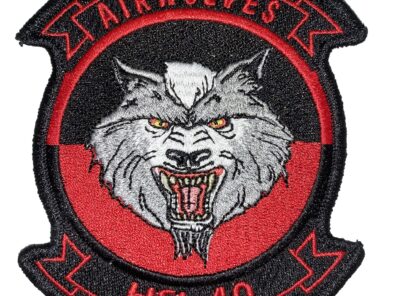