Fly with the Eightballers of HSC-8 again in this hand crafted MH-60S model. Each model is carefully carved and painted to provide a piece you’ll love.

HSC-8 traces its lineage to the second of two squadrons which bore the designation Helicopter Antisubmarine Squadron EIGHT (HS-8). That Squadron which has become HSC-8 was established on November 1, 1969.

The first squadron designated HS-8 was established at Naval Auxiliary Air Station Ream Field, Imperial Beach, California on June 1, 1956. The first helicopters employed by the command were the HSS-1N Seabat. In September 1962 in compliance with the 1962 United States Tri-Service aircraft designation system the HSS-1N was redesignated the SH-34J Seabat. At the end of 1962 the squadron transitioned to the SH-3A Sea King. The squadron performed eight Western Pacific (WESTPAC) deployments between 1957 and 1968 including combat tours in Vietnam. Notable achievements included a 1,200 mile medical evacuation (MEDEVAC) made by helicopter, the longest in history. Other squadron achievements included participation in the Apollo VI space vehicle/crew recovery and performing more than 30 Combat Search and Rescue missions in North Vietnam. The squadron was disestablished in December 1968.

A year later on November 1, 1969, a new squadron was established and designated HS-8. Although the two squadrons are separate squadrons and the lineage of the first does not transfer to the second,[2] the newly established squadron adopted the former squadron’s name, insignia and traditions in its honor. With the new squadron came new helicopters, namely the SH-3D Sea King. Notable achievements during the next decade included site surveys for the U.S. Atomic Energy Commission, a study of blue whale migration patterns, supporting President Nixon during his working vacation aboard USS New Orleans and deploying in response to the Iranian hostage crisis. In 1975 the squadron transitioned to the SH-3H Sea King. In 1976 the American Bicentennial Committee honored HS-8 as a bicentennial command. The squadron’s 19th deployment came in response to Desert Shield/Desert Storm in December 1990. This deployment was the last for HS-8 in the SH-3.

On April 2, 1993 HS-8 completed transition from the SH-3H into the new SH-60F and HH-60H Seahawk helicopters. The squadron’s 20th WESTPAC deployment was from February to August 1994. HS-8 was a member of Carrier Air Wing 14 (CVW-14) aboard the USS Carl Vinson (CVN-70). The 21st WESTPAC was concluded in May 1996 followed in September 1997 by an “Around the World Cruise” with the USS Nimitz. Deployments after this were routine until September 11, 2001.

From November 2001 to May 2002 HS-8 and Carrier Air Wing Nine deployed in Operation Enduring Freedom. There they played a vital role in the campaign that ended with the removal of the Taliban government in Afghanistan.

HS-8 made another WESTPAC deployment from January to September 2003 followed by their second “Around the World Cruise” from January to August 2005 aboard the USS Carl Vinson. The squadron earned the Carrier Air Wing Nine Golden Wrench Award for superior maintenance and mission completion percentages as well as the Battle E Device (Navy Battle Efficiency Award) for the 2005 World Cruise.

In early December 2005 an HS-8 helicopter and aircrew participated in filming a portion of the television show ’24’ where the helicopter was transporting the fictitious Russian president and his wife to the American presidents ranch.[3]

On September 28, 2007, at Naval Air Station North Island, Helicopter Antisubmarine Squadron Eight was redesignated as Helicopter Sea Combat Squadron Eight and received its first MH-60S Seahawk with the armed helo kit. In January 2009, HSC-8 went on its first deployment with the MH-60S where it was joined by HSM-71 flying the MH-60R Seahawk aboard the USS John C. Stennis (CVN-74). During this deployment, HSC-8 assisted in the filming of Transformers 2.[4]

After a short turn around, HSC-8 departed on an eight-month surge deployment to the 5th Fleet Area of Responsibility in September 2012. HSC-8 deployed as part of Carrier Air Wing NINE (CVW-9) aboard USS John C. Stennis (CVN-74) in support of Operation Enduring Freedom, maritime security operations, and theater security exercises. One of the highlights of the deployment was the rescue of a drowning man in the Straits of Malacca- the Eightballer’s first overwater rescue in several years. HSC-8 also participated in Operation Beacon Flash, a joint security exercise with the Royal Omani Air Force. 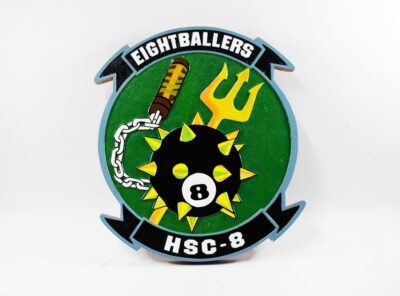 HSC-8 Eightballers Plaque Need a perfect goat locker piece for your time at the HSC-8 Eightballers ?  Check out this 14 inch carved plaque and painted with an artisan hand! *Our plaques are made to order and can be customized accordingly! … Read More 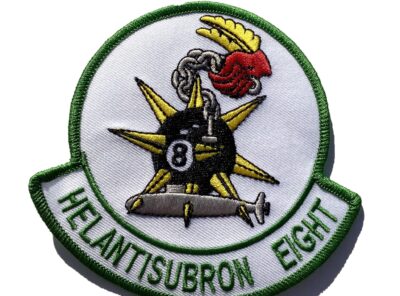 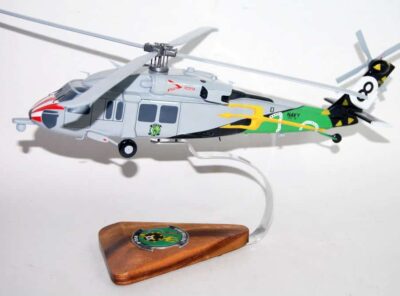 HSC-8 Eightballers MH-60S Model Fly with the Eightballers of HSC-8 again in this hand crafted MH-60S model. Each model is carefully carved and painted to provide a piece you’ll love. Specifications: Length:  16 inches This scheme is a creation of … Read More 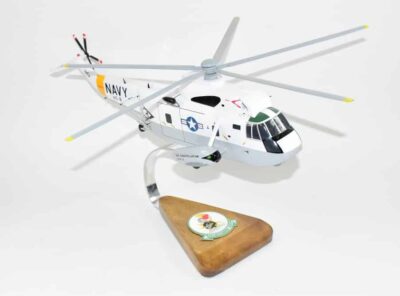 HS-8 Eightballers H-3 Model Fly with the the Eightballers of HS-8 in this hand crafted model. Each piece is carefully crafted from wood and hand painted to provide a piece you’ll love. Length – 16 inches. HSC-8 traces its lineage … Read More 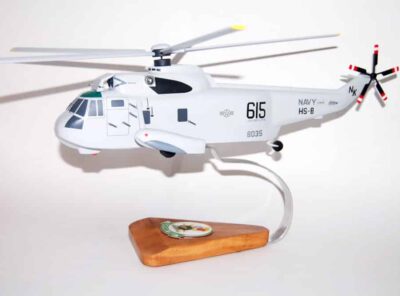 HS-8 Eightballers SH-3 Sea King (1989) Model Fly with the the Eightballers of HS-8 in this hand crafted model. Each piece is carefully crafted from wood and hand painted to provide a piece you’ll love. 16 inches. HSC-8 traces its … Read More