Fly with the HS-7 Dusty Dogs in this H-34 model. Each piece is carefully crafted from wood and hand painted to provide a unique piece you’ll treasure. 16 inches

The name of this squadron can be a bit confusing, based on the reference used. Early references called the squadron the Big Dippers, based on the fact that the primary antisubmarine sensor used on board the helicopter was a dipping sonar, back then a relatively new device. The squadron emblem and patch displayed a seven star big dipper constellation. What is certain is that for most of the its existence HS-7 was called the Shamrocks. Although the name was the Shamrocks, the radio callsign used, at least through much of the 1980s, was Dusty Dog. For example, if the individual helicopter being flown on a mission was number 610, the radio callsign would be Dusty Dog 610, often simply Dusty 610. At some point, perhaps in the late 1990s, it appears that HS-7 adopted the Dusty Dog name as its official name. Cheers, Dave Powers
In January 2008, HS-7 was scheduled to become Helicopter Sea Combat Squadron SEVEN ( HSC-7 ). The change took effect in 2011
Completed a deployment – still under the designation HS-7, and flying the Sikorsky SH-60F and HH-60H – aboard the USS Harry S. Truman (CVN-75) 21May10 to 20Dec10. 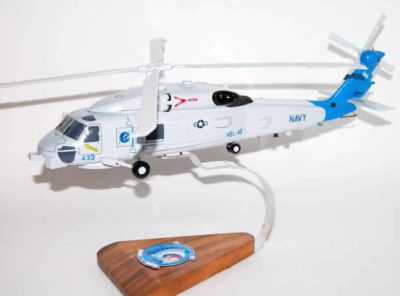