Fly with the Golden Falcons of HS-2 in this H-34 model. Each piece is carefully crafted from wood and hand painted to provide a unique piece you’ll treasure.

Helicopter Anti-Submarine Squadron TWO was established on 7 March 1952 as the first Anti-Submarine Warfare (ASW) helicopter squadron on the West Coast, flying the HRS-2. Initially used in small detachments, the first deployment as an entire squadron was made in 1957 when the world famous “Golden Falcons,” flying the HSS-1, embarked aboard the aircraft carrier USS PHILIPPINE SEA (CVA-47). At this time, the squadron was manned by 258 enlisted and 39 officers to fly and maintain 17 aircraft. Since that time, the squadron has deployed on eight other carriers including USS YORKTOWN (CVS-10), USS HORNET (CVA-12), USS INDEPENDENCE (CV-62), USS TICONDEROGA (CVS-14), USS ENTERPRISE (CVN-65), USS RANGER (CV-61), USS KITTY HAWK (CV-63), and USS NIMITZ (CV-68). Today, HS-2 deploys as a member of Carrier Air Wing TWO (CVW-2) aboard USS CONSTELLATION (CV-64) with 161 enlisted, 24 officers and six Sikorsky H-60 helicopters.

In addition to being the first HS squadron on the West Coast, the squadron boasts a long list of first and unique achievements which attest to the professional caliber and dedication of its officers and men. HS-2 was the first ASW helicopter squadron to make a deployment with the Sikorsky SH-3A Sea King, the Navy’s first turbine powered all-weather ASW helicopter. HS-2 was also the first H-3 squadron to operationally employ Helicopter In-flight Refueling (HIFR’s) at night. In November 1965, an HS-2 SH-3A performed the longest operational flight at the time. The aircraft remained airborne for eleven hours and eighteen minutes on a search and rescue mission in the Gulf of Tonkin with the help of four HIFR’s three of which were at night.

Other technical innovations by “Golden Falcons” include the pioneering of submarine detection capabilities with the introduction of the SH-3D in 1974 as a multi-sensor ASW platform. In addition to the Bendix AQS-13B sonar, Magnetic Anomaly Detector (MAD) and Multi-Channel Jezebel Relay (MCJR) active sonobuoy systems were added to the aircraft, the latter providing the carrier with sonobuoy monitoring capability. In 1980 the squadron became the first West Coast unit to deploy with new tactical navigation (TACNAV) equipped SH-3D/H helicopters.

HS-2’s multi-mission capability has been put to the test in many ways through its history. In 1964, the “Golden Falcon” were called upon to aid in flood rescue operations in Northern California, flying 185 sorties in six days, rescuing 91 people and transporting over 110,000 lbs of relief supplies to victims of the flood. HS-2 performed the first night rescue in North Vietnam in 1965. In 1966 HS-2 participated in the Apollo Saturn 202 spaceshot recovery program, and was responsible for ten overland and five coastal rescues of pilots in North Vietnam during 1967. The “Golden Falcons” provided relief support to snowbound Indians in Arizona over the Christmas holidays of 1967, airlifting fifteen tons of food supplies, flying 292 “Mercy Missions” and performing 37 medical evacuations.

In 1970, HS-2 was the first helicopter squadron to travel across the United States for deployment on a ship from the other coast. In that year, the squadron participated in operations with U.S. Forces responding to the Jordanian Crisis. HS-2 was directed to prepare to go into Amman, Jordan and also provide Combat Search and Rescue (CSAR) for the Battle Group. It was during the same year that the American flag was painted on the helicopters. The flag was painted on the aircraft overnight so the helicopter could be distinguished from the Israeli H-3’s, which might also be operating in the combat zone. To commemorate the event, the Chief of Naval Operations authorized the American flag to become a permanent part of HS-2’s paint scheme. As a result of its superior performance during that period, the squadron was awarded the Navy Unit Commendation.

Following the cease-fire agreement in 1972, HS-2 became the first U.S. Naval air unit to fly into North Vietnam, providing transportation to and from Haiphong for the negotiating team. In 1974 the squadron provided relief assistance to the cyclone devastated island of Mauritius.

The 1976 deployment aboard USS ENTERPRISE (CVN-65) was the first Western Pacific deployment for the Navy’s modern CV concept. Along with the S-3A Viking and an on board Tactical Support Center (TSC), HS-2 contributed to the refinement and success of modern day ASW tactics. In the fall of 1979, HS-2 was chosen to participate in amphibious operations with a multi-nation task force. The squadron deployed aboard USS NEW ORLEANS (LPH-11) and again proved the value of helicopter ASW. HS-2 earned the Humanitarian Service Medal in 1980 for its participation in the rescue of three groups of Vietnamese refugees. In 1984, HS-2 provided the first damage assessments following the collision of a Soviet Victor submarine with USS KITTY HAWK (CV-63).

HS-2 led the way in modern Carrier Airborne Anti-Submarine Warfare by transitioning to the SH-60F “Seahawk,” the newest and most capable rotary wing ASW weapon system in today’s Navy. HS-2 was also the first active duty HS squadron to fully incorporate the Combat Search and Rescue mission, having received two new HH-60H aircraft in November 1990. Additionally, HS-2 was the first HS squadron to deploy with the FLIR/Hellfire weapons system. 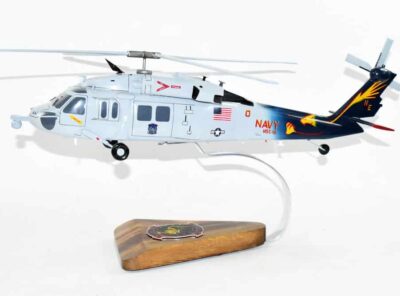 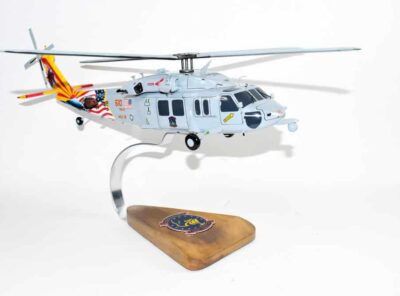 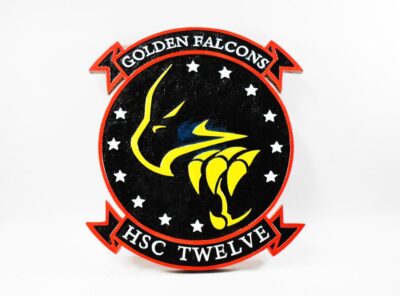 A hand crafted 14 inch plaque of the HSC-12 Golden Falcons. Each plaque is carved from Mahogany and handpainted to provide a piece you’ll love! 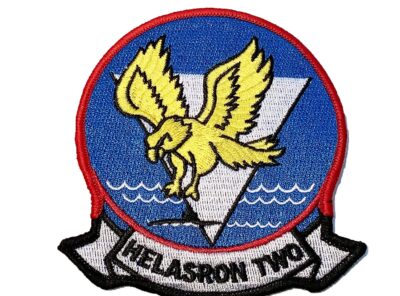 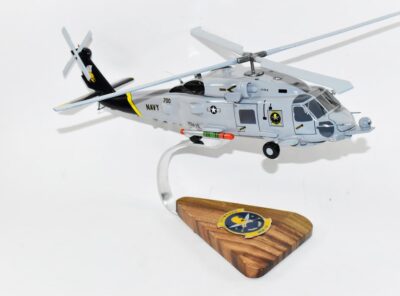