Fly with the 496th Tactical Fighter Squadron in this handcrafted F-16 Fighting Falcon Model. Each piece is carved from wood and handpainted to provide a piece you’ll love.

World War II
The squadron was activated in 1942 as the 301st Bombardment Squadron (Light) at Hunter Field, Georgia, and equipped with Douglas A-24 Banshee dive bombers as one of the original squadron s of the 84th Bombardment Group.[1][2] It received its initial cadre and equipment from the 3d Bombardment Group.[3] It operated briefly with Vultee V-72 (A-31 Vengeance) aircraft, but its operations showed this aircraft was unsuitable for dive bombing.[3] The squadron served as an Operational Training Unit (OTU), acting as the parent for elements of several light bombardment groups.[note 2]

In 1943, the squadron was redesignated as the 496th Fighter-Bomber Squadron[1] as were other AAF single engine bombardment units, and was re-equipped with Republic P-47 Thunderbolts.[2] It continued to serve as an OTU until October 1943.[1] The OTU program involved the use of an oversized parent unit to provide cadres to “satellite groups.”[4] During the fall of 1943, operations dwindled and by the end of September 1943 only five aircraft were assigned to the entire 84th Group.[5]

The squadron then became a Replacement Training Unit (RTU) and also participated occasionally in demonstrations and maneuvers.[2] RTUs were also oversized units, but with the mission of training individual pilots or aircrews.[4] However, the AAF found that standard military units, based on relatively inflexible tables of organization were proving less well adapted to the training mission in the US. Accordingly, a more functional system was adopted in which each base was organized into a separate numbered unit.[6] The squadron was, therefore, disbanded in April 1944[2] and replaced by the 261st AAF Base Unit (Combat Crew Training School, Fighter), which took over the personnel, equipment and mission of the squadron at Abilene Army Air Field.[7]

Air reserve
The May 1949 Air Force Reserve program called for a new type of unit, the corollary unit, which was a reserve unit integrated with an active duty unit. The plan called for corollary units at 107 locations. It was viewed as the best method to train reservists by mixing them with an existing regular unit to perform duties alongside the regular unit. [8] As part of this program, the squadron was reconstituted as the 496th Fighter Squadron, All Weather and activated at Mitchel Air Force Base, New York in the Air Force Reserves to train as a fighter corollary unit of the 52d Fighter Group of the regular Air Force, moving with the 52d to McGuire Air Force Base, New Jersey a few months later.[1] The squadron was apparently undermanned and thus performed very little training. During its only 2-week summer encampment (12–26 June 1950), the entire 84th Group had only four pilots capable of flying the 52d’s North American F-82 Twin Mustangs provided for their training. Like other corollary units, the 84th Group seems to have been poorly manned, and the parent 52d Fighter-All Weather Wing made little use of its corollary units, focusing on its combat mission instead. The 84th Group was ordered to active service on 1 June 1951, inactivated the next day, and its few people became “fillers” for the 52d Wing or, if there was no vacancy in the 52d, for other USAF units.[1][9]

Moved to Hahn Air Base in November 1956, remaining assigned to the 86th. Operated from Hahn for the next decade, being re-equipped with the F-102A Delta Dagger in 1959.

Tactical fighter operations
Reassigned to the host 50th TFW at Hahn in 1968 as part of the withdrawal of the F-102 from Europe, being re-equipped with McDonnell F-4E Phantom IIs and becoming a tactical Fighter Squadron. Continued routine training operations throughout the 1970s, upgrading to General Dynamics F-16 Fighting Falcon aircraft in 1982.

Inactivated in 1991 with the host 50th Tactical Fighter Wing at Hahn and part of the closure of the base and the end of the Cold War. 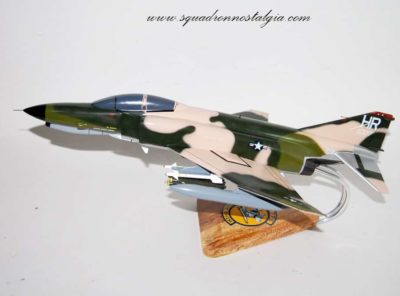