Fly with the Vampires of the 44th Fighter Squadron in this hand crafted F-15 model. Each piece is carefully carved from wood and hand painted to provide a piece you’ll love. 18 inches

World War II
The 44th Flew patrols over the Pacific from Hawaii from 7 December 1941–October 1942. It went on to fly combat missions in the South and Southwest Pacific from 21 December 1942 – 15 August 1945.
Vietnam War
It again flew combat missions in Southeast Asia from 18 December 1964 – 25 February 1965, 21 April – 22 June 1965, 19 –29 October 1965, and 25 April 1967 – 6 October 1970.
The squadron was unmanned from 31 December 1966 – 24 April 1967 and November 1970–15 May 1971. It has flown air defense over Okinawa and Japan since 1971.
The 44th Fighter Squadron was named as the winner of the Raytheon Trophy for 2012.
2013 Sequestration
Air Combat Command officials announced a stand down and reallocation of flying hours for the rest of the fiscal year 2013 due to mandatory budget cuts. The across-the board spending cuts, called sequestration, took effect 1 March when Congress failed to agree on a deficit-reduction plan.[3] Squadrons either stood down on a rotating basis or kept combat ready or at a reduced readiness level called “basic mission capable” for part or all of the remaining months in fiscal 2013.[3] This affected the 44th Fighter Squadron with a reduction of its flying hours, placing it into a basic mission capable status from 5 April-30 September 2013. 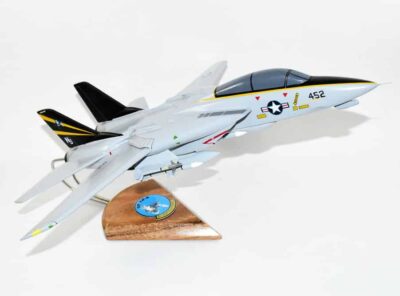