Fly with the 349th Air Mobility Wing in this handcrafted wooden C-5 Super Galaxy Model. Each piece is carved from wood and painted to provide a piece you’ll love!

The 349th Air Mobility Wing is the largest associate wing in the United States Air Force Reserve Command. 349th AMW personnel fly the C-5 Galaxy, C-17 Globemaster III and KC-10 Extender. The missions of the aircrews include airlifting personnel and material worldwide as well as aerial refueling a wide variety of aircraft.

The mission of the 349th AMW is to “…provide combat ready Airmen and expeditionary support to the war fighter.” This makes the wing responsible for training almost 3,500 reservists who work side-by-side with their active duty counterparts in the 60th Air Mobility Wing, also stationed at Travis.
History
The unit’s 349th Operations Group traces its lineage to the 349th Troop Carrier Group of the Second World War. The 349th Troop Carrier Group was a Curtiss C-46 Commando transport unit assigned to Ninth Air Force in Western Europe.

Initial activation and mobilization for the Korean War
The wing was first activated as a reserve organization at Hamilton Air Force Base California in June 1949 as the 349th Troop Carrier Wing, when Continental Air Command (ConAC) converted its reserve flying organizations under the wing base organization, which combined them with their support organizations under a single wing. It trained under the supervision of the 2346th Air Force Reserve Training Center. President Truman’s reduced 1949 defense budget also required reductions in the number of units in the Air Force, and the wing drew its cadre from the 325th Air Division and the 68th and 72d Reconnaissance Groups, which were simultaneously inactivated. The wing trained for airlift with the Curtiss C-46 Commando, but also operated a number of trainer aircraft. The wing was manned at 25% of normal strength but its combat group was authorized four squadrons rather than the three of active duty units.

The wing, along with all reserve combat and corollary units, was mobilized for the Korean war. It was called to active duty in April 1951. Its personnel were used as fillers for other units,[6] and its aircraft were distributed to other organizations as well. The wing was inactivated the following day.

Reserve fighter operations and Detached Squadron Concept
The wing was redesignated the 349th Fighter-Bomber Wing and once again activated in the reserves at Hamilton,[1] where it replaced the 920th Reserve Training Wing. The reserve mobilization for the Korean War, however, had left the reserve without aircraft, and the unit did not receive aircraft until July 1952.[8] Ironically, its initial aircraft were again C-46 Transports, and it was not until 1953 that it received World War II era North American F-51 Mustangs, along with trainers. Later in 1953 it received its first jet fighters, Lockheed F-80 Shooting Stars. Although called a fighter bomber unit, like all reserve fighter bomber wings, it had an air defense role.

During the first half of 1955, the Air Force began detaching Air Force Reserve squadrons from their parent wing locations to separate sites. The concept offered several advantages: communities were more likely to accept the smaller squadrons than the large wings and the location of separate squadrons in smaller population centers would facilitate recruiting and manning. As it finally evolved in the spring of 1955, ConAC’s plan called for placing Air Force Reserve units at fifty-nine installations located throughout the United States. The wing’s participation in the program began in October 1955, when the 313th Fighter-Bomber Squadron moved to Hill Air Force Base, Utah and the 314th Fighter-Bomber Squadron moved to McClellan Air Force Base, California, leaving only the 312th Fighter-Bomber Squadron with wing headquarters at Hamilton.

The Joint Chiefs of Staff were pressuring the Air Force to provide more wartime airlift. At the same time, about 150 Fairchild C-119 Flying Boxcars became available from the active force. Consequently, in November 1956 the Air Force directed ConAC to convert three reserve fighter bomber wings, including the 349th, to the troop carrier mission by September 1957. In addition, within the Air Staff was a recommendation that the reserve fighter mission given to the Air National Guard and replaced by the troop carrier mission. In September 1957, the wing once again became the 349th Troop Carrier Wing.

Return to airlift mission
With the 1957 redesignation, the wing began to re-equip with Flying Boxcars. Cuts in the budget in 1957 led to a reduction in the number of reserve wings from 24 to 15. This included not only inactivation of reserve fighter bomber wings, but of three troop carrier wings, as well.[15] In November, the 313th Squadron’s assets at Hill were absorbed by the 733d Troop Carrier Squadron and it moved on paper to Portland International Airport, Oregon, where it replaced the inactivating 403d Troop Carrier Wing.The wing added a fourth squadron in March 1958, when the 98th Troop Carrier Squadron activated at Paine Air Force Base, Washington to replace the 328th Troop Carrier Squadron in November 1957.

In April 1958, the 2346th Center was inactivated and some of its personnel were absorbed by the wing. In place of active duty support for reserve units, ConAC adopted the Air Reserve Technician Program, in which a cadre of the unit consisted of full-time personnel who were simultaneously civilian employees of the Air Force and held rank as members of the reserves.

The 349th converted to the Dual Deputate organization in April 1959.The 349th Fighter-Bomber Group was inactivated and its troop carrier squadrons were assigned directly to the Wing.

Activation of groups under the wing
Although the dispersal of flying units was not a problem when the entire wing was called to active service, mobilizing a single flying squadron and elements to support it proved difficult. This weakness was demonstrated in the partial mobilization of reserve units during the Berlin Crisis of 1961. To resolve this, at the start of 1962, ConAC determined to reorganize its reserve wings by establishing groups with support elements for each of its troop carrier squadrons. This reorganization would facilitate mobilization of elements of wings in various combinations when needed. However, as this plan was entering its implementation phase, another partial mobilization, which included the 349th Wing and its flying squadrons, occurred for the Cuban Missile Crisis.[1][22] Only four hours after the first call to report for duty was made, 95 percent of the wing’s flying personnel had checked in and were ready to move. In addition to its four squadrons, the 733d Troop Carrier Squadron was also activated and assigned to the wing during this mobilization.[1] During the mobilization, they served for one month to airlift troops and supplies to the buildup of military forces in the south Florida area.[20]

On 1 June 1966, the 349th was redesignated the 349th Military Airlift Wing, its gaining command was changed to Military Airlift Command and the wing converted to the C-124 Globemaster II intercontinental airlifter. The wing was again mobilized on 26 January 1968 in response to the 1968 Pueblo Crisis. During the Vietnam War, the wing airlifted many thousands of tons of cargo across the Pacific to support U.S. forces throughout the Southeast Asia and Pacific theaters of operations. In 1969, the 349th moved to Travis Air Force Base, and became the second reserve associate wing, teaming with the 60th Military Airlift Wing at Travis.

During the Persian Gulf War, 1990–1991, more than 1,750 people from selected units were activated for service in support of Operationd Desert Shield and Desert Storm. Although some units and individuals deployed to the Persian Gulf, others deployed to Europe and other overseas locations, while some remained in the United States and still others remained at Travis AFB.

Post Cold War era
On 1 February 1992, the 349th adopted the USAF objective organization was redesignated the 349th Airlift Wing, deleting the word “military” from its name to conform with the active duty Air Force’s reorganization and realignment policies. The group was reactivated as the 349th Operations Group and the operational squadrons were reassigned from the wing to the group.

In September 1994, the McDonnell Douglas KC-10 Extender aerial refueling mission was added to the Wing and became the 349th Air Mobility Wing, the only Air Force Reserve unit at the time to fly three types of aircraft: the Lockheed C-141 Starlifter, the Lockheed C-5 Galaxy and the KC-10.

In December 1997, the C-141 was retired from service at Travis. Some were sent to McChord Air Force Base, Washington. and McGuire AFB, New Jersey. The retired Starlifters went to the 309th Aerospace Maintenance and Regeneration Group at Davis–Monthan Air Force Base, Arizona.

Global War on Terrorism
In the aftermath of the terrorist attacks on the Pentagon and New York City’s World Trade Center, the 349th provided airlift, mortuary affairs personnel, and other vital support in the early stages of Operation Resolve; Operation Noble Eagle, the mobilization of reservists to provide security after the attacks; Operation Infinite Justice, operations in Afghanistan; and Operation Enduring Freedom, the Global War on Terrorism.

With the McDonnell Douglas C-17 Globemaster III arrival at Travis in Summer 2006, the wing and its host became the only units in the country to fly three major aircraft. On 25 May 2006, the 301st Airlift Squadron converted from the C-5 to the C-17 and on 25 June 2006, the 945th Aircraft Maintenance Squadron was activated to support the Globemaster III.

In the late 2010s the Wing consists of the following major units: 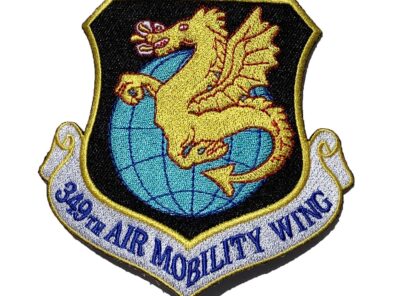