Fly with the 175th Fighter Squadron in this handcrafted F-16 Fighting Falcon Model. Each piece is carved from wood and handpainted to provide a piece you’ll love.

The squadron was first activated as the 387th Fighter Squadron, one of the original squadrons of the 365th Fighter Group at Richmond Army Air Base on 15 May 1943. The squadron trained with Republic P-47 Thunderbolts. The unit moved to RAF Gosfield, England in December 1943, where it became part of IX Fighter Command.[1][2] The squadron’s first mission, flown on 22 February, was a bomber support sweep of short duration over enemy-held territory. Early missions were flown in support of Eighth Air Force Boeing B-17 Flying Fortress and Consolidated B-24 Liberator bomber operations. Later, the 387th flew dive-bombing missions to attack such targets as bridges, aerodromes, rail facilities, gun positions, and V-weapon sites prior to the Operation Overlord, the landings at Normandy.[2]

The 387th began its move to the Continent, taking up residence at Azeville Airfield, France on 27 June 1944 to provide tactical air for the United States First Army. On the Continent, the squadron moved rapidly from one airfield to another, eventually winding up at Fritzlar Airfield, Germany on V-E Day.[1]

After the end of hostilities, the 387th Fighter Squadron took part in the disarmament program until June, then returned to the United States in September 1945, and was inactivated at Camp Myles Standish, Massachusetts on 22 September 1945.[1]

The War Department authorized the establishment of Air National Guard Squadrons, Groups and Wings in 48 States. The formation of a South Dakota – Iowa Air National Guard and assignment of Col. Frederick Gray, Jr.,[4][5][6][7][8] who was a veteran fighter pilot having served with the Eighth Air Force and The RAF, as group instructor for both units, was announced by Brigadier General Charles H. Grahl, Iowa Adjutant General, at Des Moines, Iowa on 26 June 1946.[9] Squadrons of the Air Force, each with 34 planes of various types, were located in Sioux Falls, at Sioux City and Des Moines, Iowa. Air Guardsmen under Col. Gray were trained to throw 102 planes into battle within 12 days. Lt. Col. Ted Arndt assistant to the Adjutant General surveyed local air field facilities, making note of buildings and installations to be needed by the new Air Force. The South Dakota Air National Guard 175th Fighter Squadron, with Thirteen officers, was approved by Col. E.A. Beckwith, Adjutant General, Rapid City, South Dakota on 20 September 1946.[10] The 175th Fighter Squadron was assigned to the 132d Fighter Wing,[11] Des Moines, Iowa. The unit was equipped with the F-51D Mustang, and several types of support aircraft.[12] 18 September 1947, however, is considered the South Dakota Air National Guard’s official birth concurrent with the establishment of the United States Air Force as a separate branch of the United States military under the National Security Act.

After the 175th Fighter Squadron was organized and was extended federal recognition on 20 September 1946. The squadron was equipped with North American F-51D Mustangs and was assigned to several fighter groups in sequence, finally to the 133d Fighter Group of the Minnesota Air National Guard, although the squadron remained under the jurisdiction of the South Dakota Military Department. The mission of the 175th Fighter Squadron was to train for air defense. 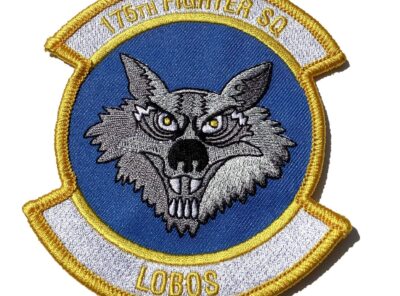